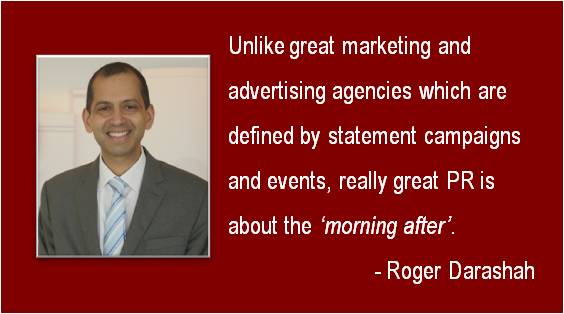 The PR world continues to mimic its older sibling, advertising; and I’m not restricting myself to the former’s increasing use of creatives, planners and, of course, paid media. It is locked in a frenzied debate about the ideal structure through which a consultancy can generate a return and create genuine value for clients. Strategies range from consolidation to diversification and – having spent half my career with what are now the world’s largest two PR firms and the other half with independents — I’ve witnessed many of these alternative models first hand.

The dedicated – and, subsequently, ‘integrated’ – team, was a large consultancy favourite, particularly for global mandates. I worked as part of a dedicated team for two different global firms in Europe, and for Hewlett Packard (HP) for many years. In both cases the model was PR-only (editorial) across multiple markets, and the challenges were similar. While the business cases remained unquestionable for both – huge volume discounts and, at the end of the chain, a single contact for the client, guaranteed revenues for the PR firms – so did the challenges from working in such an environment.

High-value, creative media professionals rarely dream of joining a big firm to work on a single client; even one as diverse as HP. So a steady rotation was an essential part of any management policy; remaining too long on a single client also creates dependencies and risks which are not good for either the client or the firm. So the potential benefit of accumulated knowledge, shared processes and structures was also mitigated by the risk of teams becoming ‘institutionalised’ and restricted in their thinking and approach.

Towards the end of the 2000s, the ‘dedicated team’ model was all the rage; I worked on similar models for eBay across Europe, and LinkedIn, globally, but there are many other examples. Enfatico, WPP’s attempt at the integrated dedicated model to service the Dell account with everything from creative and planning to media buying and PR, collapsed after just 16 months, following which WPP lost the entire business.

An alternative take on the full service/integrated model was launched last month, and caught my eye. The Plus Network is a group of six independent expert consultancies offering an alternative to what it calls “The increasingly bureaucratic and investor-focused holding companies and agency monoliths.” Many of these firms are members of the independent agency body, the PROI, and they are all extremely well known and reputable.

I’ll be watching their progress with interest, but the announcement did trigger some thoughts about PR and why it can be so difficult to scale expertise across geographies and across other disciplines such as paid and creative.

After many years at the coalface, I can attest to the challenge of recruiting really smart, connected PR staff for large/global mandates. Such candidates crave creative space and client access – both of which tend to decrease with account size. It is a reality that global accounts require teams to be inspired by other people’s ideas to bring them to life in their local markets. Typically, the ideas are born in the US (particularly, in the tech sector, for instance) and while creativity remains essential across distributed teams, the type of ideation and autonomy they aspire for, may not be possible.

Secondly, a distinction to PR is the nature and value of ‘real time’/ongoing thinking; while marketing and most of the advertising mix tends to be campaign based, the PR function does not stop when the event is over. In fact, it can be just the start.

And when running large, international mandates, this distinction is crucial; as soon as the message is in the public domain, journalists, editors, columnists and, increasingly, social media commentators, decide what they think of it. The campaign, in effect, belongs to them. While the rest of the integrated team can relax, celebrate and move on until the metrics come in or the next campaign is due, the PR teams must remain diligent, indefinitely. After all, the key to great PR, is not about campaign management, it’s propagating and protecting the brand even when there is no news to tell.

In my experience, this distinction becomes lost (or is discarded) as consultancies restructure and accounts go global; while creatives, planners and copywriters can be commissioned, structured and managed around defined campaign moments, genuine PR is ongoing. Unless the integrated/extended PR team is structured, incentivised, managed and measured along these lines, the global PR model will always fall short of its proactive, local equivalent. This conversation is currently absent from the PR agency remodelling debate.

It’s the classic ‘morning after’ test. Unlike great marketing and advertising agencies which are defined by statement campaigns and events, really great PR is about the following day, and the day after that.

What role does Public Relations play in the hospitality industry?

Innovation Marketing — One small step for the customer, one giant leap for the market