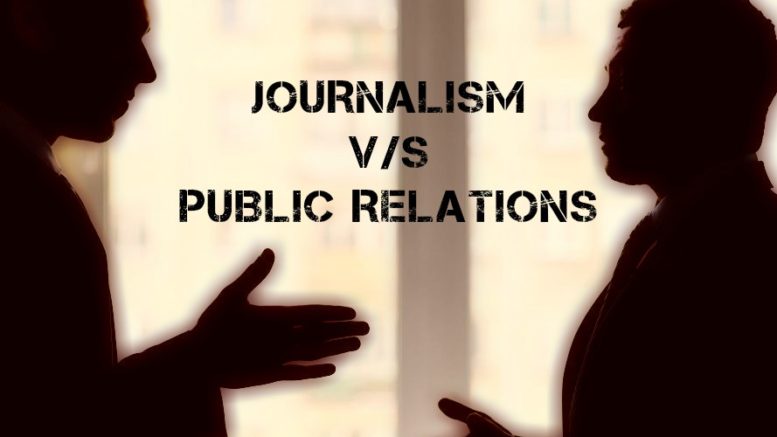 Who is a journalist? Once upon a time an individual who worked for a newspaper or news magazine or a TV news channel and shared news was called a journalist. Then began to emerge content collectors and news anchors who also began calling themselves journalists. Today, there are pretty and handsome faces or well-connected names who get a by-line for the effort put in by someone else. Then there are bloggers and tweeters who also call themselves journalists.

Who is a Public Relations professional? Once upon a time an individual who worked in-house for an organisation or worked for a PR firm was called a PR professional. Then began to emerge fixers and dealers who also began calling themselves PR professionals. Today, there are one woman and one-man armies who pull a fast one, really fast and think media relations is the be all and end all of Public Relations thus bringing ill-repute to what is supposed to be a noble profession.

I was in Mumbai on Friday where I met a business journalist who covers the marketing and advertising space for a news channel. We were meeting after seven years and on realising I had founded PRAXIS she said that an event of that type was much needed as she was dealing with atrocious and pesky calls from PR pros a dime a dozen on a daily basis. She showed disdain. This is because, today there are hundreds of quacks who can find the number or email of a journalist easily and then hound them without thinking twice or thinking through their content. More often these are 23 and 24 year olds doing a lousy job.

On the other hand we have Ms Megyn Kelly of the NBC who while interacting with Prime Minister Modi in St Petersburg last week asked him if he was on Twitter. And made a fool of herself. A seasoned journalist hanging out with two of the most powerful politicians in Russia and ever so ignorant. Lack of knowledge, absence of research and what not. This, by a 46 year old. But no one questions it except trolls. Well, there are umpteen examples one can write about from India in general and New Delhi in particular.

Well, I have written several times about this in the past and it is a never ending downward spiral. There are bad journalists and there are bad PR professionals. But among the good journalists there are some who are influential and set the tone that paints all PR professionals with the same brush. I don’t think this will ever end until a mechanism is put in place. Like there are accredited advertising agencies, there is a need to have accredited Public Relation firms from where journalists will take calls. The rest will merely be informers. Until such time the chaos will prevail and the bad mouthing will continue.

3 Comments on "Will the chaos between what journalists think of PR people and vice versa ever end?"

In search of a mentor