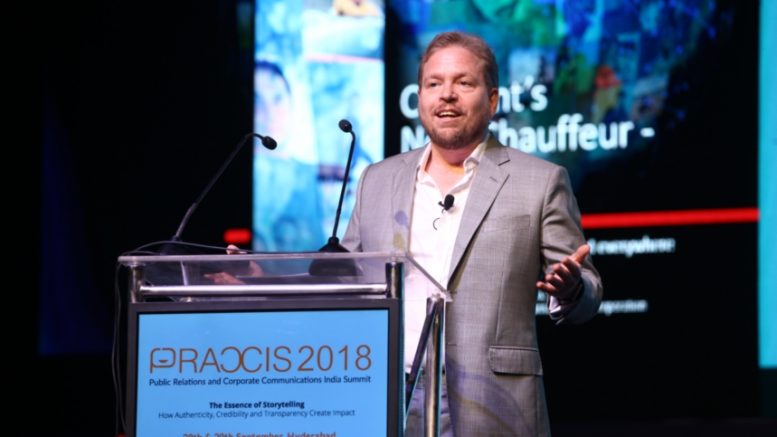 In the market, brands are involved in creating a unique culture that is exhibited in organisations too – interacting with internal or external publics, to evolve a collective way of thinking, believing, behaving and working. And storytelling helps in building trust, shared vision, diversity of thought, commitment to learning, freedom of expression and a sense of belonging too. Significantly, different cultures enhance the impact of stories.

“How Culture Impacts Storytelling” was the crux of what Roland Buerk, Senior Director & Head of Communications, IMEA, Nissan Motor Corporation focused on. Describing his life’s journey, he moved through different roles – a journalist with BBC, serving as correspondent in Bangladesh and Sri Lanka before taking his current position in Tokyo in 2009. At the BBC, Buerk covered, among other stories, the 2004 Asian Tsunami, as well as the impact of the March 2011 disasters in Japan. It was after that that he joined Nissan in Japan. But he firmly believed that he was “always a storyteller”.

And having crossed over to PR land, he pointed out that “everybody thinks they can be good at PR. Only some can do that. What PR, journalists do is tell stories essentially”.

Effectively, storytelling is not just an art, it is a craft. As we work in different places, on different projects, it about the ability to make content. It may be different in different countries. “It’s a rare marketer who looks beyond the immediate consumer,” he pointed out. Citing Nissan’s “parking slippers” video, he described how they “showed the audience what it means to be Japanese!” Here, it was a sheer case of including the Japanese culture.

Then there comes up the question of “breaking the Culture Code”. We need to really study the consumers, for how do we understand our customers? Another example of #SheDrives which showed how Nissan penetrated into the culture of Saudi Arabia and showed a unique way how women could catch up on learning to drive. Here the brand was defying a conscious difference through the culture code, as he put it. With Saudi Arabia finally allowing women to have a driver’s license, Nissan offered a group of young women the chance to get behind the wheel for the first time – with a surprise group of driving instructors (who turned out to be their fathers, husbands, brothers!).

He narrated how they released an inspirational video about this initiative, which was part of Nissan’s #SheDrives campaign, which encourages women to embrace the exciting prospect of becoming a fully-licensed driver in 2018. While they were delighted, they did admit that one blockage did pop up – they faced reluctance from some of their family members.

To help them overcome this, Nissan invited aspiring female drivers to pick up driving skills and build confidence on a driving course, with a twist in the storytelling! Instead of professional instructors, the women were met by their respective husbands, fathers and brothers who were their teachers for the day.

Celebrating five years in India, the aim was to make Datsun a brand for aspirants. “We chose to celebrate people and travelled to different places, inviting India to step out and share their stories,” he revealed. The storyline of #MorePower2You was about celebrating colleagues – an integrated approach that guaranteed exposure, positive sentiments and established a connect.

Reputation earned can be of two types – reputation from character and reputation from competency. It’s worth focusing on character-building for brands, and to make a brand relevant to the culture and the audience, he said. Ultimately it’s the difference between good PR and bad PR, between good story telling and bad storytelling.

Why stories v/s facts is a completely one-sided contest?

Preparing for an interview? – Part I

The mirror of journalism gets cracked with #MeToo: Hard questions loom