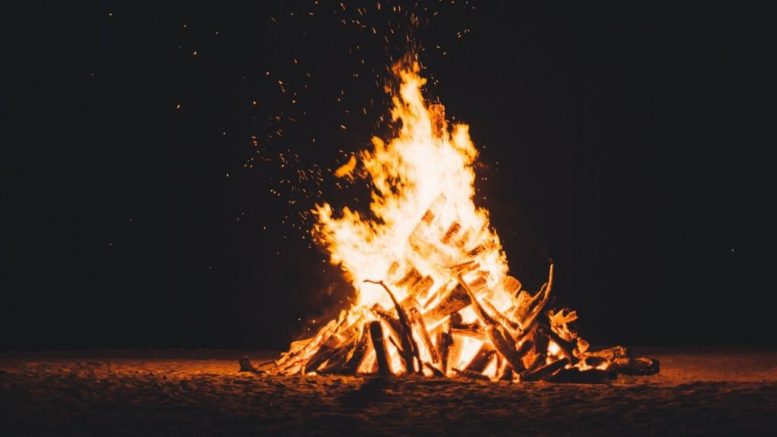 Every year, as the winter takes a turn into the New Year, Delhiites wait for the bright festival of Lohri. It is that time when the dull cold rolls into bonfires that light up the houses and celebrations glaze the evening.  This year, on 13th January, we saw people splurging to celebrate the longest night which is the Lohri night, which also marks an end to the dull wintry days and is supposed to be the cutoff date for the beginning of warmer sunny days.

So involved was everyone that #lohricelebrations  was trending on Twitter. Hotels went all out to usher in the festivity.  Imperial Hotel, Delhi‏ tweeted – Take a look at how our guests rejoiced dancing on Bhangra music while enjoying India’s cultural panorama at #Theimperial for #Lohricelebrations. The message from La Taj‏, Faridabad was – “Wishing you a Very happy Lohri. May the lohri fire burn all the moments of sadness and bring you warmth of Health, Joy, Happiness and Love”. With festivals, the lure of sweets is not far behind. A day before D-Day, Bengali Sweet House‏ at Bengali Market wished everyone a very Happy Lohri !!! And, it is not just the Lohri festival in North India, it was also time for other festivals in other corners of the country that coincided to flash happiness – Makar Sankranti, Pongal, Magh Bihu…

As the capital city comes alive in the winter months, it heralds fun times too. There’s a spark of creativity that lights up the dark, dull days. Art exhibitions, plays, book fairs add to the festive spirit. At the World Book Fair 2018, it was ‘nationalistic’ literature that created a stir. It excited and enticed visitors to books focused on the country’s traditional ethos. Families, college students and curious readers streamed into the stall where the attraction was – a blitzkrieg of ‘nationalistic’ literature by publishing houses, which came together. Slim anthologies on Mahatma Gandhi, Lala Lajpat Rai, Bankim Chandra and Keladi Chennamma jostled for space with publications on the freedom struggle. Titles like ‘Manusmriti and Dr Ambedkar’, ‘Liberation Struggle of Hyderabad’, ‘How to Tell Hinduism to Your Child’ and ‘Comics’ on Deendayal Upadhyaya and Nanaji Deshmukh could be seen nestled with books on the Emergency and socio-cultural histories of north-east states. Drawn to the stall, were people who hadn’t even heard the names of the people on whom books were published – like the book on Andal, the ‘Mirabai of the South’ or the book on Madam Cama, the first woman to unfurl the Indian flag on foreign land, and who had a street named after her, Bhikaji Cama.

As festivities hit a high, there was a ‘fit’ movement that was invading some companies. Across Siemens’ offices in India, an initiative aptly called ‘the healthy break’ was started – to combat the harmful effects long hours of sitting has on personal health. The impact has been encouraging – for the number of sick leave taken by employees has reduced by 5-8 per cent. Effectively, this means employee productivity has shot up! Employees feel more agile and refreshed; they are also encouraged to join programmes which involve diet management, yoga sessions and measurement of body parameters.

The emphasis on promoting a healthy lifestyle among employees has been on the rise in many other organisations too. At Deloitte India, L&D (learning and development) programmes incorporate a break every 90 minutes to allow employees to do simple stretching exercises and yoga. Some companies have done away with fixed seating arrangements and allow employees to use standing desks. At Yes Bank, to avoid the ill-effects of long sitting hours in front of the computer, ‘team huddles’ have become part of the daily schedule. A 30-minute daily huddle encourages open communication, besides helping employees take a formal break during working hours. As part of a global pulse challenge at GSK, participants were given pulse trackers to count the daily steps. The global challenge is a 100-day virtual journey around the globe. In teams of seven, employees track their physical activity and work towards a daily target of 10,000 steps.

While activities can engage people, sometimes brands can dis-engage too. Take the instance of H&M, the clothing retailer, who recently put up a public apology for the ‘Monkey’ image featuring a black child. It was an image that appeared in its online store that showed a black child model wearing a hooded sweatshirt that said “coolest monkey in the jungle.” The image was widely criticised online for its reference to a monkey. The Weeknd, a Canadian pop star of Ethiopian descent, was one of those who criticised the move, tweeting that he would decline to work with the company in future.

Quick to react, the company removed the image immediately, and said they would also pull the shirt from its stores worldwide. In a statement, H&M said it agreed with those who were “upset about the image” and pointed out that they would investigate how the image appeared in its online store in “some European markets”.  Yes, it was a brand dis-engaged and how!

Be the first to comment on "Looming large were festivities, a ‘fitness’ bug and a dis-engaging act"