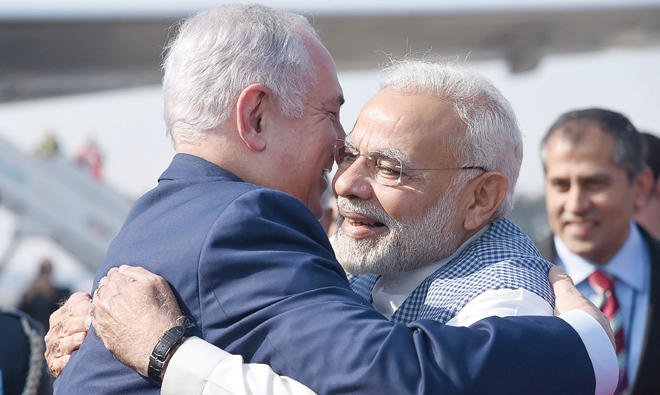 As the Israeli Prime Minister Benjamin Netanyahu arrived for a historic visit to India, It was no surprise that he was welcomed by Indian PM Narendra Modi with the latter’s trademark warm embrace.

Modi’s eagerness for hugging world leaders is seen through various levels of scrutiny. While some believe it to be a powerful foreign diplomacy tactic (and therefore branded Hugplomacy), some consider it a tacky and forceful invasion of personal space. Though he’s not the only world leader to harbour an extraordinary ritual of meeting his kin. CNN compiled a (rather painful to watch) list of President Donald Trump’s never-ending, shoulder-dislocating handshakes:

Regardless, in the age of fake news, elusive “official statements” and scripted conversations, global leaders’ body language around his/her kin is likely to reveal a lot more about their relationship than what is reported and read about them.

Here Chancellor Merkel illustrates what she thinks of President Putin mansplaining her.

For example, some commentators argue that Trump’s aggressive handshakes are indicative of his alpha-male, dominating disposition. And other gestures driven by the same personality trait on the larger world stage come out as clumsy, desperate attempts to proclaim a stature among world leaders.

Can the same be said about Modi’s Hugplomacy? Are these just desperate or vain attempts to earn some respect? Or do they serve a higher purpose?

Modi is a performer; his vivacious demeanour as the Prime Minister or as the chief campaigner of the BJP has arguably connected well with his audiences. On the international stage, however, his audiences are not just the Indian people, it is the global Indian community at large, as well as foreign leaders. His Hugplomacy has been acknowledged as his differentiating trademark, evident in how international media has already noticed and analysed it.

Notably in the past, trademarks have cemented his high recall in his campaign to the PMO. It may have a same effect on his global campaign for international affairs, where he represents a billion and a half of us. Whether we like it or not, our leader is hinting to the world of our friendliness and willingness to be the first to extend an olive branch. That is also the inspiration that his most ardent followers are likely to take away (another major implication of Hugplomacy).

But it is not just a symbolic differentiator, but something more tangible. As Soutik Biswas, India Correspondent, BBC points out “Hugs go beyond the formal protocol – they show affection, comradeship and spontaneity. Mr Modi, clearly, believes that hugs fetch more dividends; they are not about cuddly politics alone.” Many schools of thought link warmth and empathy to good leadership qualities and even a solid foundations to negotiations. Possibly, Hugplomacy lays the groundwork for tougher or more pragmatic negotiations that happen right after.

Do you think that Hugplomacy works? What are the risks that come with it? Should Modi draw the line somewhere? Let me know in the comments below or on twitter @HemantGaule.

The rise and rise of combative populism: CNN and Trump seem to be made for each other

Is silence the new PR strategy?

Growing up under the shadow of a brand

In Conversation with Rakesh Thukral