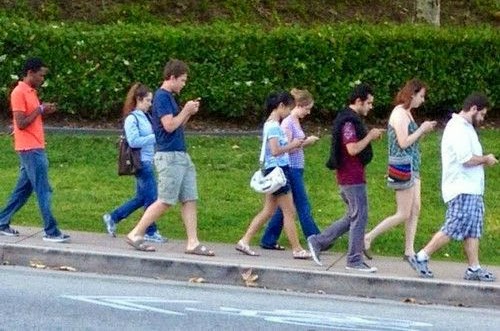 That’s what I thought I believed till I noticed a recent phenomenon that has been taking over the minds, no, behaviour of some people, off late.

I was walking down to the market, last week, accompanied by my son, who was engrossed with his cellphone (which again is not unusual). We were heading for dinner at the locality restaurant, as our cook did not turn up. I was trudging up the stairs, when I saw him wondering off, mumbling that he had to grab a Pokemon, lurking in some dark corner in the market! Yes, this is the ‘Pokemon GO’ phenomenon that is gripping people these days! And, he discloses that one of his friends is on a ‘fast and furious’ mode – cycling around the city of Dilli, to catch Pokemons.

If you spot people, in metros or rambling around the streets these days, eyes glued to their cellphones, chances are they are neither texting, tweeting, instagraming nor snapchating; they are searching for Pokemons! Remember the cute, Japanese cartoon that appeared in 1996 and quickly captivated the school kids?

For the uninitiated, Pokemon GO invites players to hunt for digital Pokemon on their smartphones.

Even before its formal launch in India, the game has become a national sensation!!!

And, ever since Pokemon GO surfaced, strange things have been happening!  Recently, two young kids, crossed over the border illegally, from Canada into the US in a remote part of Montana, till some US Border Patrol agents found them. Incidentally, the game has met with unexpected success from Spain to Australia, doubling Nintendo’s value, since the game’s launch in the US. A journalist was caught playing Pokemon at a US Government briefing on Islamic State. When the journalist was questioned by the State department spokesman John Kirby on whether he was playing the game, he responded: “I’m just keeping an eye on it!”

Keeping a close watch is the watchword. Closer home, Pokemon GO has given a twist to the familiar Bollywood dream story. A nine-year-old boy from Howrah left his home Mumbai-bound, to capture more Pokemon! Then, India registered its first road accident because of Pokemon GO. Someone playing the Nintendo game on his mobile phone for the first time, in Mumbai suddenly had an auto-rickshaw crashing into his Mercedes E240! And, this got Mumbai police to kick off a campaign to spread awareness about the hazards of playing the game. They tweeted – Life is not a game. Especially not one to be played on the roads!#RoadSafety. This accidental victim now wants to create awareness about the game and warn the players.

And, according to experts, the impact of the ‘madness’ around the game will have far-reaching impact. The repercussions have been multifold. From tripping or falling (and getting hurt) to trespassing into forbidden areas, the footprint of the addiction is obvious all over. Abroad, the Pokemon obsession has led to mugging, abduction and even robbery; plus there’s been a rush in car accidents and other mishaps too, due to totally distracted players.

During Manifest 2016, the name came up. “How many Pokemons have you caught?” was the question popped by Ravi Virmani, moderator of the Power Exchange: Improving Health Care and went on to say that there will be a Pokemon game too. And as the discussion concluded, his parting shot was: Collect more Pokemons!

Aside: In all this excitement around the game, yours truly, has a confession to make. Giving in to temptation, I have just downloaded the game. So, I have to wait and watch as the game works its magic. But, I promise, I will not be brainwashed and become totally oblivious to the surroundings….to become accident-prone.

Accepted, the lure of the game is “unputdownable” as the tagline of The Telegraph goes. Pokémon GO mania has indeed, taken over the world! But, let not anything get the worse of you. #BeEngaged – but not to distraction!

Be the first to comment on "Nothing can get the better of you, unless you want it…"

A letter to the rockstars of Public Relations, and it could be you…