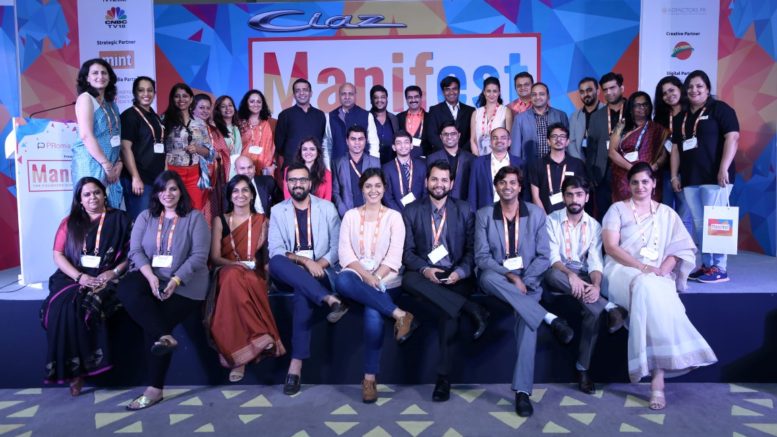 After months of planning, a new platform for business leaders to exchange ideas was born on the 29th July 2016 in New Delhi. Manifest is a labour of love dedicated to men and women who are creating ventures of value. As the magazine partner Reputation Today was part of creating the platform that helps speakers, attendees and partners enhance their reputation.

An array of inspiring speeches by a dozen eminent men and women on innovation and disruption were the hallmark of the two-day summit. 1. Radhika Aggarwal of Shopclues, 2. Ameera Shah of Metropolis Healthcare, 3. Gul Panag of Mobiefit, 4. Aparna Jain of Zebraa Works, 5. Srikant Sastri of Crayon Data, 6. Raghav Bahl of Quintillion Media, 7. Arokiaswamy Velumani of Thyrocare, 8. Ramesh Agarwal of Agarwal Packers Group, 9. Amitabh Kant of NitiAayog and 10. Anshu Gupta of Goonj were the ten individual speakers besides Actor Divya Spandana and Parliamentarian Tataghata Satpathy.

Josey John, Anil Padmanabhan, Syna Dehnugara, Suparna Chaddha, Abhinandan Sekhri and N Madhavan were some of the prominent journalists who moderated some of the keynotes. Besides these there were over 45 young Founders on Power Exchange panels sharing their stories of growth, vision for the future and thoughts about the sector they operate in.

This event would not have been possible without the solid support of partners including Niiti Consulting who helped craft the talk points for the various Power Exchanges. Arm Digital who managed the social media outreach for the summit. Adfactors Public Relations and its Founder Madan Bahal backed up the event unconditionally. There were also media partnerships, prominent of which was CNBC. Kiruba Shankar as the host did a stellar job. The core team from The Promise Foundation comprising Roshan Alexander, Anubhuti Mathur and Shruti Malhotra were the rockstars. A bunch of volunteers including those from SSMC and Event Capital did a fine job. 29th and 30th July 2016 were indeed historic.

The absence of Public Relations firms and their representatives barring a couple of them was on expected lines. These are the places were learning, sharing and public relations happens. That is why some PR firms are struggling to earn respect. My five learnings from the summit-

Be the first to comment on "Manifest all the way…"

The best ad campaigns from the last decade: Part II

A dozen events to mark your calendars with, in 2019, within India