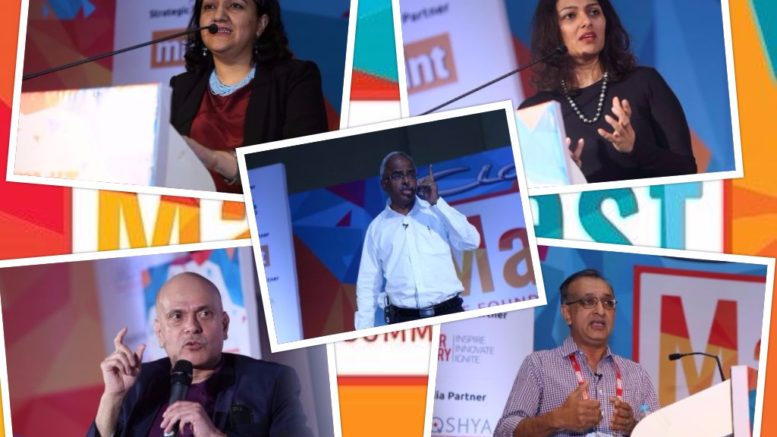 Manifest16 was a ‘first’ of its kind. A founders’ business summit like no other! Bringing together the best in the start-ups industry – two days of inspiration and opportunity, highlighted by shared experiences with leading entrepreneurs. Electrifying environment with ignited minds; Despite the torrential rains that pelted down, relentlessly on a rain-starved Delhi.

Manifest16 brought together young thought leaders, who strategically talked about how they started their businesses with innovative ideas. This candid, no-holds-barred networking event opened up myriad opportunities to interact with inspired minds. It was all about connection and community. And the Manifest community was born!

As Amith Prabhu, Curator Manifest put it – “There was no event where Founders came together in an offsite style, completely in a democratic way and we wanted to create a retreat style summit.”

Day 1 of Manifest16 kicked off with the latest entrant in the Unicorn Club, Radhika Aggarwal, Co-Founder, Shopclues.com emphasizing on what distinguishes founders: the burning passion – “the fatigue, the exhilaration of getting something done; those start-up days – it’s the best journey!”  Recalling that many hurdles do come across, but the best decision is – you have to move forward. Things are tough, but you show up everyday day and make things work! “There will be hurdles, but get up and show up – rejig!” With 100 million visits every day, she said with pride – “We got all done one step at a time – that’s the only way!” 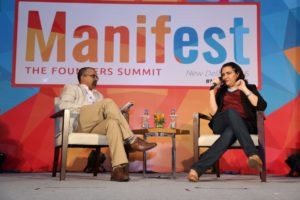 Finding it an “an honest speech”  Josey John, Consulting Editor, Factor Daily enquired what are the fires fought today, and she exclaimed they were shipping 75,000 packages a day! In the early phase it was getting small things right. “My biggest challenge is making sure the vision of the company is clear, and providing leadership on a day-to-day basis,” she explained and went on to say, “Fund raising is a big concern today! If you create value, valuation will follow”.

Optimism gives you energy, so you have to be optimistic, revealed N Madhavan, Senior journalist and columnist. Starting off with a reality check for founders, he disclosed his formula – What I sell is = realism, optimism + pessimism/2”. He went on to unveil some lessons that would help entrepreneurs. Life can be different from the rosy picture: you can take better decisions. Do the culture check – sound like Indians. Quoting John Sculley, “Silicon Valley rewards you for top line and Wall Street rewards you for the bottomline,” he warned that the biggest mistake is to fall for hype. The world is bigger than the small definition of ‘start-ups’.

The journey that gives self awareness is exciting, more because of what you go through yourself – the fears, vulnerability and resilience said Ameera Shah, Promoter, Metropolis Healthcare as she spoke on “Owning the Belief to Innovate”. One of her first lessons in the services space was that it’s very intangible, you have to experience it and there has to be a difference; the differentiation has to be in the DNA of the organisation. Culture is another important area, for when building a family business, emotions is as important as business and “we expect customers to be dealt with a great deal of empathy”; create a superior customer experience in every single moment of truth. In products growth is oxygen but in services you have to build market share with sustainability. What brands build is experience, was her firm belief. 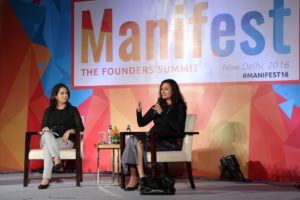 Syna Dehnugara, Features Editor, CNBC-TV18 touched on owning the belief to innovate, which is a crucial ingredient for any entrepreneurship and questioned her about finding strength against constant rejection, pushing boundaries which can be exhausting. Strength has to come from within, knowing that you can stand up, and having that confidence is critical – was Ameera’s answer.

The Power Exchange on Money and Infotech was a discussion with participants – Jimeet Modi, Founder, Indian Trading League, Ajay A Singh, Founder, 5nance.com, Adhil Shetty, Founder BankBazaar.com, Vinay Mathews, Founder, Faircent.com and Naveen Surya, Founder, ItzCash. The talk took off with each one describing their elevator pitch. It was moderated by Monika Halan, Consulting Editor, Mint. “Cash is king in India,” said Naveen Surya and that “if India has to be digital, life is lifeblood”. Agreeing to this was Adhil Shetty who said, “To democratise finance, technology is key. The consumer chooses, so give consumers a value proposition”.

“How Big Data is Transforming the World” was tackled by Srikant Sastri, Founder, Crayon Data. Big Data is changing business, politics and now the whole world is changing, he observed. The sheer volume that is being generated is unmanageable, unstructured and only technology can put it together; the old ways don’t work, you need new technology. And, how do you use Big Data for political campaigns? In India, it’s not easy but possible, he said.

The Power Exchange on Aggregators was moderated by Saurabh Uboweja, Founder, Brands of Desire, who discussed the inspirations, problems and challenges that the participant founders has experienced. Kanika Tekriwal, Founder, JetSetGo, Aakirt Vaish, Founder, Haptik, Santosh Panda, Founder, Explara and Amit Agarwal, Founder, NoBroker.com. When asked what was the big ‘aha moment’ it was Kanika who said “Every day is an ‘aha’ moment!” Finally, it’s not about competing with each other, but learning from competition, said Uboweja.

New Media was the centre of the Power Exchange that was moderated by Roopak Saluja, Founder, 120 Media Collective who opened the discussion saying, “Media is going to be most disrupted in the next 12 months!” The participants – Ayesha Sood, Founder, Jamun Collective, Dhanya Rajendran, Founder, The News Minute, Jayadevan PK, Founder, Factor Daily, Ritesh Singh, Founder, Arm Digital and Meena Vaidyanathan, ‎Founder, Niiti Consulting discussed how they identified their audiences, the big ‘M’ – Money, and what is going to be relevant in 2020. About plagiarism, it was Dhanya who had the last word – “As of now, it’s free for all!”

Raghav Bahl, Founder, Quintillion Media observed he was on a “high”, being transported 25 years back, seeing the sense of entrepreneurship among young founders here. If you think it’s one linear curve, you’re wrong, it’s going to be a terrible curve and one attribute you must have is resilience like Muhammad Ali! Survive the valley of death, was his word of caution. Small wonder, for he was waxing eloquent on “Revolutionary Thinking in Building an Enterprise”. While building an organisation, lessons are embedded in those experiences and nothing teaches you more than failures – he observed. 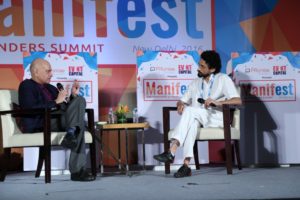 In conversation with Abhinandan Sekhri, Co-Founder Newslaundry he said that the digital business is in the throes of evolution. About the road ahead for Indian TV, he said that no one is struggling and that TV is a mature market, but regulations have been confused. Regarding positioning of Quint, he said clearly, he will always play for scale.

Touching on the current raging craze, “How many Pokemons have you caught?” were the opening lines of Ravi Virmani, Founder, Credihealth who moderated the session on Improving Health Care. The participants were – Akash Ganju, Founder, Mirai Health, Pawan Gupta, Founder, Curofy, Gauri Angrish, Founder, Coral Care Book, Subhashini Subramaniam, Founder, BabyBerry and Akansha Kapoor, Founder, Oyehelp. They discussed how their companies were adding value to healthcare and the challenges faced to scale market share and leverage technology.

The finale was indeed owned by Dr Arokiaswamy Velumani, Founder, Thyrocare. “Lucky are those born to the poor” was his starting line and that was his refrain throughout his talk.  The story of his life was centered around “the luxury of poverty, with nothing to lose in life, where downsize is 0!” Comfort zone is a danger zone he said, which actually pushed him from strength to strength, “planning to lose and being alone, a lion” with the motto-“jithao”. This was what plummeted him to the top, such that his IPO was oversubscribed 75 times! He unveiled the rules of dreaming to be an entrepreneur, and some of his useful tips were –create wealth, not stress; create jobs not money; burn calories, not salaries; focus, learn, grow and enjoy. The audience lapped it up with a standing ovation!

Be the first to comment on "Manifest 16: A Founders’ Rendezvous Part 1"