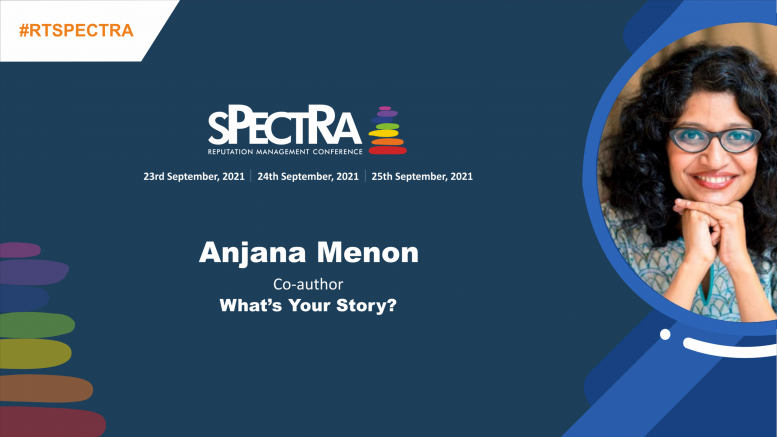 Storytelling is about telling stories. Stories have always been a sure way to communicate. It is about using stories to engage your audience, or to make something clear. During the days of cavemen, before people learned how to speak or write, they would resort to stories through pictures. Stories are much easier to remember than loaded facts. Also, stories are enjoyable, they stimulate your imagination so that you can re-imagine to your heart’s content.

The fireside chat between Anjana Menon, Co-author, What’s Your Story and Radha Radhakrishnan, Wipro started off by focusing on why is storytelling so important in the current avatar, especially for B2B brands and now you see B2C brands joining in the bandwagon.

Shift in how we consume information

The content strategist and storyteller Anjana, who loves new ideas that help companies communicate better, explained that fundamentally, there’s been a huge shift in how we consume information and there is a huge amount of information out there, on multiple platforms. There is so much of noise, there’s a huge information explosion that’s just shouting out loud or repeating a message and it may not get through to the audience. “Ÿou need to get into the mode that is memorable and relatable,” she stated. For centuries information has travelled through stories and some have been passed down through generations; children listen to stories from parents, grandparents and they connect. The emotional connect is so strong – that’s why storytelling is so strong. Take for instance, Newton’s theory and the story of the apple; everyone remembers the apple story, through which the theory became memorable.

Being passionate about storytelling, how did Anjana educate CEOs about storytelling while talking to them about content strategy? “Ï always start with a story,” she said and it has to be a story then can relate to. Increasingly, research says we retain facts through stories. And “the tricky part is the transition stage, which CEOs haven’t made and navigating them away from traditional way of storytelling to a more exciting form of storytelling is where the challenge lies”. Radhika was curious to know whether Anjana came across a situation in the past, where the CEO felt it is OK to be a storyteller. Quick on the uptake, Radhika shared that on the issues we face is that the marketing department does not have anything to do with newer forms of storytelling, and they still think of advertising for selling an idea; in fact, within marketing there’s a division that thinks storytelling is for corporate communications. The two need to come together. Some companies have made the transition, some haven’t, she pointed out.

Telling stories better is the need of the hour

What prompted her to write the book? Having been into serious storytelling, through her career as a business journalist, where she faced a demanding environment (where you had a few seconds to decide the headline and the news item). “So, we learnt how to tell stories better and the skill came naturally,” she recalled and added that it was when they moved into other careers, “we realised it is not a skill that is easy and you have to train yourself”. They were trained in the environment they were in, but they did not realise it then!

How difficult was it to collaborate and write the book with three others in three different countries? Apparently, it wasn’t very challenging as they had worked together and they adhered to the same principles of writing. The book is almost a guide to storytelling, said Radhika as she enquired why was this style of writing used? Anjana explained that the book was intended to stay for a while as anyone can pick it up anytime, and it also can be a refresher course for a middle or senior-level corpcom role; and if you get caught in the ‘jargon trap’, there’s a chapter on how to get out of the jargon trap! “The book was intended to be a business storytelling handbook,” she disclosed.

When it comes to Indian brands and their adoption of storytelling vs international brands, Anjana revealed that there is a huge gap which was very palpable, but it is narrowing down because storytelling is becoming very hyperlocal and it’s very targeted now. What works in one market may not work in another market. “It’s like microclimate, becasue if you want to do storytelling in India, in Tier 1 or Tier 2 it will be very different in a metro. Indian brands have understood it very well that we are a diverse market,” she noted.  Where international brands are ahead, is in the technology, as they are more willing to experiment with immersive storytelling, which may be more expensive. A good example was the collaboration between Swedish clothing giant H&M and Indian fashion designer Sabyasachi Mukherjee, which was in the news recently that led to an outrage, but his collection sold out on the opening day!

One clear point was the book did not cover the hyperlocal markets in India, for “the book is meant for anyone in any part of the globe”. “If you’ve understood the rules, you should be able to apply it in any market you operate in”, she divulged.

Every human being has some storytelling skill

A lot of people write ‘storyteller’ in their profile – is it over used, and is it harming the entire storytelling phenomena, wondered Radhika. It’s definitely a good thing and in social media, Radhika pointed out that you can see grandmothers, a 5-year old with a following of one million and so on, who are able to reach out and connect. That’s the basic of storytelling. “There’s room for everybody in this pie. I genuinely believe every human being has some storytelling skill and that is a good thing,” she imparted.

Corporate life is inundated with crisis, as we see so often today. How can storytelling be used in crisis situations? There is a chapter on dealing with crisis and tips galore. “Don’t hide, because people are unforgiving of deception,” and it will come back to haunt you when you least expect it! The stories you tell must go back to your primary message and must be true and authentic (eg Johnson & Johnson’s Tylenol crisis of 1982).

What is the future of storytelling? A lot will be device-led, and especially in the pandemic mode, people are wedded to their devices, she detailed. Will AI proliferate at a greater level and take away the human touch?  She added that the advancement of technology will shape storytelling and it will be more immersive with AR, VR involved.