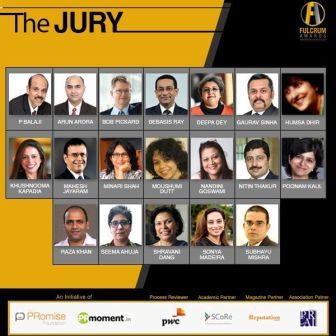 Finally, the second edition of Fulcrums have witnessed numerous submissions and are waiting to be screened by the eminent jury. Last year as the Fulcrums made their debut, The Promise Foundation, of which I’m a Co-founder and Advisor played a subtle role of hosting them. This year the dynamics have changed where The Promise Foundation is a majority owner and has decided to bring in new rigour and discipline to the Awards. It is probably the only awards system in the world for Public Relations to have –

I was a silent observer of the entire process last year including being a fly on the wall at the jury meet. I was impressed by the way Hina Issar Huria – our awards director ran the programme. Atleast 3-4 jury members looked at each of the submissions prior to the jury meet and spent considerable time on the long-list to arrive at the shortlist and winners. Thereafter, the jury chair and the awards director retained a list of winners which no one else had access to with no scope for tampering or influence. Several people were surprised that we did not inform winners in advance to be present at the Awards night to ensure that the results were confidential till the very end. Only the trophy makers were given the list of winners by the Awards Director two days prior so that the names could be engraved – a practice we will do away with this year. The sealed envelope with names of winners will remain with two representatives of PwC from the time the jury meet is complete in mid-July and until mid-September when the Awards are announced.

Despite similar stringent methods being followed in the debut edition I heard murmurs at the Awards night and later from a handful of individuals, some of whom did not even participate in the awards that some of the winners had paid to emerge victorious. It is unfortunate that these men (three of them) felt that way. I don’t want to name them but I hope they read this.

I have evolved as a professional with only one strength – that of integrity. I have never compromised on my values or never been excited by the lure of money. While the fingers were not pointed at me, the fact that these people were trying to paint the awards with a dash of taint was unwarranted. I’m convinced that the Fulcrum Awards are here to stay and if all goes well we will take them international to the Asian region next year and have two legs. One leg for India and another for Rest of Asia. We truly want to honour excellence in Public Relations and stand out as the most coveted and sought-after award. I have already seen people and organisations who have won last year make it part of their email signatures and CVs. I am confident the credibility of what we set out to do is and will remain intact for many years.

Be the first to comment on "The sanctity of Fulcrums"

Poor AQI can be hazardous to wealth

Subtraction can be better than addition