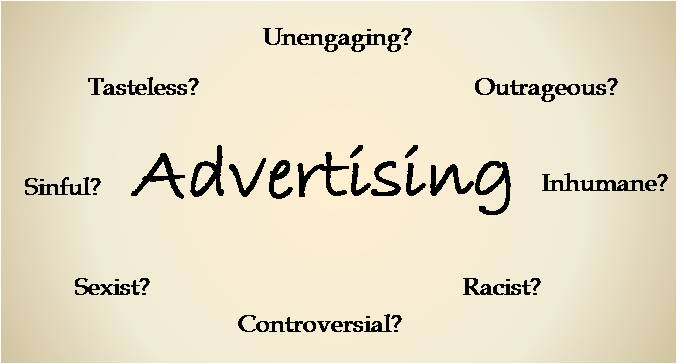 Recently, an unusual marketing stunt caught my eye, which incidentally, bombed. A skating rink in Japan went all out and risked a marketing gimmick.  At the Space World theme park in Kitakyushu, Japan there were thousands of dead fish frozen on display, underneath the ice. About twenty five different kinds of fish were inserted into ice – now, how new or novel an attraction is this? And, surprisingly, some were arranged into words and shapes to create what was called an “ice aquarium”. Obviously, this did raise an uproar. Immediately, after the launch, people took to social media to vent out their feelings! Some called it “tasteless”, “sinful” and “a desecration of life”. Animal Rights activists also took up cudgels. Perhaps, it is important for marketing to be ‘humane’ first! The rink was forced to pull down shutters, as customers were outraged, which is an understatement.

Then, there is the Jack and Jones’ sexist ad controversy that has got many audiences un-engaged.  “Don’t hold back. Take your work home,” proclaimed the ad. Upset that his image took a severe beating, the hero of the hour, came out with an apology, (thought five days late!) referring to “creative freedom”, which again was not convincing enough. The ad was slammed by many social networking sites for being ‘sexist’. Actor Siddharth tweeted: “A new low for women’s rights in the workplace. What were they thinking? #Fail.”  Jack and Jones came out with an apology: “We didn’t intend to offend anyone with one of our billboards. #NOTHOLDINGBACK and withdrawing it immediately”. Heated discussions on TV channels debated all sides to this story. The conversation is still in the spotlight as, the controversy rages on Twitter, with the ad, thrown open to face the ire of Twitterati.

Apparently, the actor had no inkling of the pictorial details of the ad. This brings to mind when the Maggi crisis hit the headlines, and even the endorsers Big B, Mr Amitabh Bachhan and Madhuri Dixit Nene, were not spared.

A similar case was what happened with Aishwarya Rai Bachchan, where she was targeted for appearing in a jewellery ad, which appeared ‘racist’.  She was in period costume, looking absolutely gorgeous like she stepped out of an oil painting from olden times, but it was the small ‘slave’ boy by her side, holding an umbrella above her head, which brought on “racism” accusations. Again, at that time, she had professed she had no idea about any little boy in the ad, and that this was a ‘cut and paste’ job.

But then, on the other hand, there are examples of brand communication, where they got it bang on. Take the Google reunion ad, which was the most shared ad of 2013. Here what was pertinent, was how the ad film poignantly captured the reunion of two friends, who meet after ages, after the partition of India and Pakistan, with help of Google search. This did strike a strong chord across the nation, and notched up more than 10 million views and more. Again the “Dekh Le” ad,  which aimed to raise awareness about eve-teasing, and received great response.  It showed how the young women handled the  unwanted behavior of the men, by flashing mirrors on their faces to let them know how they look when they stare, which  embarrassed them enough to look away! The popular song “Dekh le tu dekhtey hue kaisa lagta hai” composed by Ram Sampath was engaging enough to make a point. The ad received more than 2.7 million hits on YouTube within a month of release.

This brings me to a point. Some brands live their dream and reach out to people. How can a brand’s dream be fulfilled? Dreams, as we know, engage us enough to keep us wrapped in that world, even though we are fast asleep, and sometimes keep us wishing that we do not wake up. The essence of a brand is that it ultimately sells dreams. People buy brands because they want to be a part of that particular dream, which again, is an emotional decision. So, the idea is to create an emotional connect and the reason is not as ‘pure’ as most of us think it is or wish it to be; emotion and feelings aren’t always compatible with reason. We feel, before we think. In fact we feel in order to think, as a famous quote goes.

Ads are indeed, aspirational. But, for anyone who has taken this caption seriously, ‘Don’t hold back. Take your work home’, my advice to them is – hey, hang on, do hold back!

Reputation and Marketing: two sides of the same coin!

Be the first to comment on "Un-engaged: creating waves of discontent"

PRime Time 3: What goes into preparing for & succeeding in an international role

Show you care – invest in your team

The Essence of Storytelling – How Authenticity, Credibility and Transparency create impact!