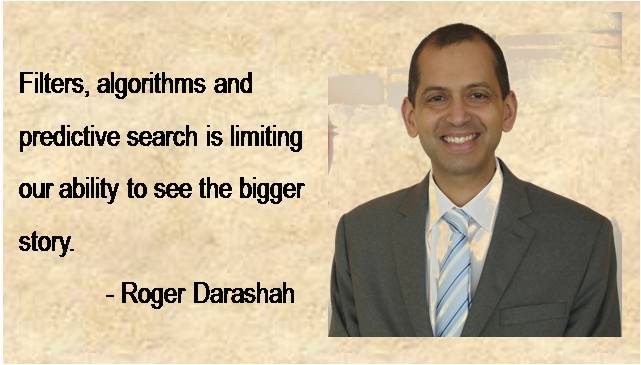 Internet activist Eli Pariser coined the term ‘media bubble’ to describe the restrictive effect of algorithms and other filters on people’s view of the world. The effect is not only to limit readers’ access to other, competing points of view, but to reinforce their ‘incumbent’ viewpoint with increasingly supportive (even, extreme) versions of the same. Rather than nurturing debate, this cycle creates a ‘polarisation effect’, with people placed on either one side of the debate or the other.

This effect is evident in both the recent US elections and the UK’s Brexit referendum with almost equal proportions of the electorate extolling diametrically opposed positions, leaving little room for debate or compromise.

From a public relations perspective, I see another equally pervasive effect of the ‘media bubble’ phenomenon; a decline in the practice of ‘media grazing’; reading newspapers, magazines and books from beginning to end.  Media grazing used to be – at the very least – standard practice for weekend supplements, where in-depth, feature stories could provide fresh angles and insights into the week’s news.  The basis of media grazing is the antithesis of the algorithm which ‘pre filters’ content according to pre-registered criteria or previous reading habits. What the latter approach gains in terms of efficiency is lost by being increasingly reductive.  If we only read what we believe is already of interest, our universe will only become smaller. . .  and smaller.

A report from Ohio University suggests that the practice of media grazing has actually become an anachronism for today’s millennials.

“The ability to control what you see within your filter bubble is yet another significant impact social media has had in the role of college students and 18-34 year old adults in receiving news. This group has now become the consumer with a choice on what they want to be exposed to and anything that is disliked is just a click away from being a forgotten post . . . .”

But the joy of media grazing is not based on relevance, efficiency or one’s propensity to ‘like’ content or otherwise. It’s the discovery of what interests other, completely different, people, how their world is defined, and what they care about; knowledge is fundamental to the art of PR.  The fact that it’s not agenda driven but a form of pure, intellectual indulgence enables the media grazer to disconnect from daily pressures, client priorities and other limited, work-based criteria. Such time is not wasted, it can be the most productive part of the week.

This week, for instance, I read of the craze for multi-colored food sweeping India; and I don’t just mean coloured macarons, but blue hamburgers! I learned of the guttural rage that the Helvetica typeface can exert on designers; so-called ‘Helvetica Stress’. And also that – according to the Brihanmumbai Municipal Corporation (BMC) – 51% of all trips in Mumbai are on foot, with 80% of them lasting fewer than 15 minutes.

I’m not sure when (or, even if) I’ll ever require such information in a work context, but the joy of media grazing isn’t simply transactional. It’s about observing the wider world, in which we and our clients operate, and finding connections to illustrate stories, drive conversations and engage influencers. In the case of the latter, the key – as any PR professional will confirm – is framing the story from their perspective.  If we limit our reading to daily clips, or pre-filtered newsfeeds, how are we ever going to find out what these perspectives are?

According to research from Reuters, social media has now overtaken television as the principle source of news. ‘Passive’ grazing (ie sitting in front of the TV) provided at least some connection with the extended, outside world; today, even that contingency is losing ground. I shudder at the prospect of a new generation of PR professionals whose canvas is defined by their clients’ media clippings; our profession and our clients actually depend on a vision that goes broader.

Cracking the ‘filter bubble’ has become the CMO’s priority, particularly across newer platforms such as Snapchat to audiences under 35 years.  The irony is that it’s only by exploring beyond the confines of the algorithm, that PR professionals can help their clients to crack it.

So next weekend, over a coffee (or a beer!) when you are flicking through the Sunday supplements, don’t feel guilty; far from wasting time, you are actually helping to build your client’s brand!

The why and how of Podcasts for Marketing

How brands can handle COVID-19