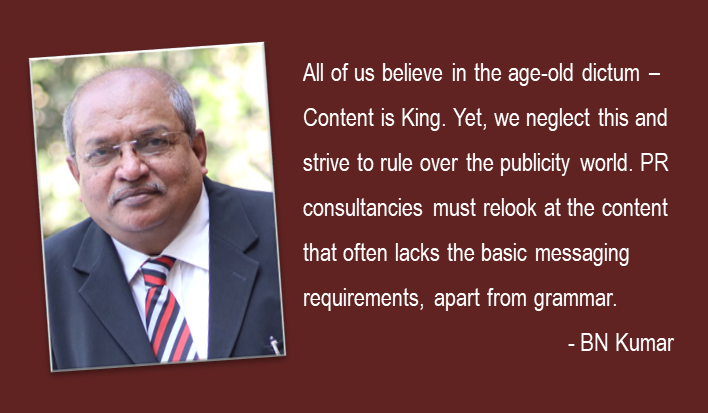 I have been running online courses on the art of writing Press Releases. Yes, I am serious. And the courses are free. More often than not, the courses are one way! Because, I do not see anyone taking my points seriously.

Over the years, the way the press releases are being dished out by various PR consultancies has not improved at all. Many of them miss the basic elements such as even datelines. National, says one release, India says another! I am forced to respond to these “PR Professionals” that such datelines do not exist. Even worse, some do not even mention the dates. They just write, for instance, New Delhi, September 2021. One may wonder if the PR person is letting you the freedom to use the release as and when you like it. But no, on the top left side, they do not forget to mention in bold, For Immediate Release!

Then begin the essays that read like: Cow is a domestic animal, it has four legs, two ears etc. Yes, they begin writing the history and geography about the particular company and not telling you what is the news that the company wants to convey.

In other words, the many PR consultants have either forgotten the art of writing press releases or they stick to what their clients send with tall claims, packed with adjectives. And when you send a query, you get the standard response: Will talk to the team and get back. You wait endlessly and give up. (I have been doing that)

Sample the IPO related Press Releases that come with just a couple of paras and a longish statutory disclaimer provided by the bankers. Then you are given the link to a 600+ page-DRHP (Draft Red Herring Prospectus) which you are expected to open, read through and make the head-and-tail about the company going public. It is understandable that the bankers and legal teams may not allow detailed press releases, but the PR firm can always send 500-600-word note separately about the company.

Am I cribbing? Well, yes and no. I am also reflecting complaints from my media friends.

PR consultants might as well ask, why should we spoon-feed the media? Is it not the media’s job to write news stories?

True. But, aren’t you taught in PR to be facilitators of media? Why do companies need PR help if the raw data is to be sent to the media?  This can be done by courier agencies!

This facilitation assumes much more significance in these days of working from home and working from anywhere! With the widespread retrenchments, the fewer journalists – reporters and sub-editors alike – are burdened with tonnes extra work to produce stories. My dear PR Consultant, if your release has to get into quality media, do focus on the quality of the content that you dish out.

Media reports quoting CMIE survey say that the number of people employed by the media and publishing industry has been going down – As against over 10.3 lakh people across India in September 2016, it has come down to 2.3 lakh only in August 2021. The net result is that you have fewer people left to attend to a larger number of PR consultancy requests.

Many journalists seem to have joined the PR profession, yet one does not see much improvement in the content. A probable explanation for this could be that the media professionals have joined the agencies at the strategy level and not the basis content level. Exactly!

All of us believe in the age-old dictum – Content is The King. Yet, we neglect this king and strive to rule over the publicity world.

It is time that the bosses at PR consultancies began realising that content should also be part of the strategy. It is time that the senior journalists that you have engaged are fully utilised for improving communication skills, more importantly the writing and rewriting techniques.

And, finally here is a tip for packing the releases with quotes. These paras should also be simple and straight and not repeating what is already stated in the release. While making announcements of partnerships of JVs, our press releases say XYZ spokesperson said “we are happy to enter into this partnership….etc etc.” . Isn’t it obvious that the company would not have entered into the deal if it was unhappy about it? So, why repeat the obvious. Instead, make the spokesperson say what it means to the company in terms of improving business capabilities or expanding into new areas and so on. That will make an interesting read than XYZ being merely happy!

Remember, the clients or companies would like to address their audiences through the press releases. Hence, the messaging has to be straight and simple.

Be the first to comment on "News value locked down!"

The relaunch of an icon

How to spot an incompetent leader easily