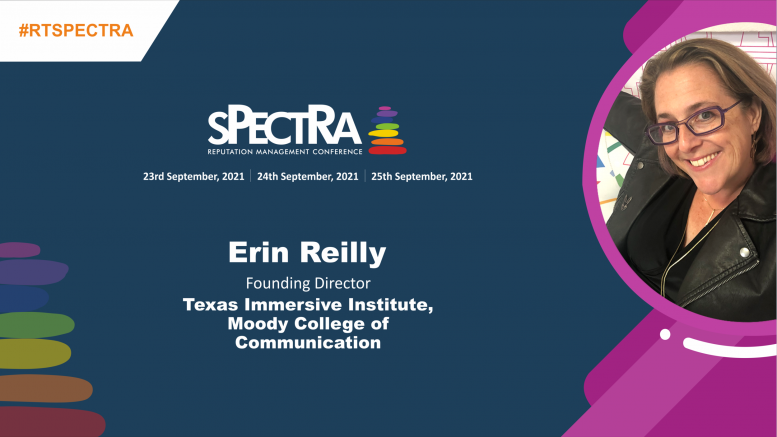 In highly competitive markets, we see that building brand equity has emerged as one of the main priorities for the business, as it brings several benefits. In business your reputation is the currency that matters. “Innovating is the Only Way to Higher Success in Reputation Building” was the centre of discussion for Erin Reilly, Founding Director, Texas Immersive Institute, Moody College of Communication.

Opening her talk with exploring what is the formula for creating not just good but great ‘immersive’ experiences, she suggested that we think deeply about our relationships with all forms of media. How others understand how ‘immersive’ describes the way we communicate now and in the future; for now and in the future, we join the ‘metaverse’, a term typically used to describe the future of internet, she disclosed and added –  metaverse is the branding of our physical and digital environments – a way for us to physically persist in virtual space.

“I’d like to look at it through the lens of the ‘immersive’, which has a rich history,” she said as she unveiled the sub-sectors of the Immersive Entertainment Industry domain which stretched from themed entertainment, theatre, escape rooms, haunted attractions, themed bars & restaurants, exhibitions, Virtual Reality & Augmented Reality (XR), to Alternate Reality Games (ARG), Experiential Marketing and Interactive Art Museums.

‘Immersive’ is a loaded world

Waxing eloquent on ‘immersive’ she explained that it is a loaded world, encouraging audiences to have interactive, personalised, experiential and emotional experiences. And, a formula emerged after having interviewed experts from multiple disciplines to understand what ‘immersive’ means. For success it’s a convergence of the understanding of your audience + exploring story forms + identifying new technology. We have to adapt the technology that defines the metaverse where we can be immersed, she revealed. Collectively known as XR, these technologies display the new phase of human-computer interface, integrating digital content into our real world.

They are disrupting our everyday experiences; and an experience has to have some key attributes to greatness such as – it has to be beautiful, unique, authentic, inspirational and welcoming. The Le Petit Chef was a good example here of creating a dining experience – an unforgettable night out. This was a ‘wow’ moment, and wow moments excite and engage. The true value of immersive is to transport the user with the experience of the story. Innovation here led the way to add to the reputation building of the brand.

So, content becomes the new reality and the world becomes the user’s campus – eg Dr Crumb’s School for Disobedient Pets which became super popular in 2020. People want control over their experiences and have choices in the path they take in the story. Choice is a key part in the immersive, she said and added that you want to make the experience unique and also take them through that experience.

The search for ‘inspiration’ is a core aspect of our behaviour and decision-making. Immersive experiences need people to change behaviour – connecting to nature in many new ways, exposing them to new, unexpected ideas or creating spaces that support a diverse range of activities that broaden perspectives. ‘Welcoming’ is another  aspect that leads to behaving in a friendly manner. Most experiences must accommodate a sense of belonging and built a sense of community. Here she touched on the wizardy world of Harry Porter where the Muggles created magic, where young witches and wizards can go, explore and practise their new skills. She narrated the story of how they turned the admission centre at the institute into an interactive space – to give the students s feel of what they will learn!

Currently, they are involved in an experiment called “Eyes in the Sky”, which is a Mixed Reality experience designed to bring about awareness and environmentalism. Basically, it is experimenting on mixed reality, both physical and digital.  So, they are seriously exploring this emerging field at Texas Immersive.

Overall, ‘immersive’ is about getting involved. The relationship between audience and creator has changed and ‘immersive’ offers a profound shift in how people think, feel and behave. Today’s world is no longer satisfied with being passive and with leaned-back storytelling experience. They want to be part of it, and the relationship between storyteller and audience is blurred. It is for us to imagine where ‘immersive’ can take us into the future and we decide whether we want it to be good or great.

It seems like a far-future vision. How do you think it is going to emerge as a new reality asked Bipasha Chakrabarti, Facebook in the Q/A session. I think we are in the early stages of ‘metaverse’ working; the first thing I think about as a designer is persistence because having a persistent id that travels with you across platforms and the technology is complicated. Another thing is people will think about their ‘privacy’ which is getting harder and harder. And, interestingly, creating digital avatars has entered the scene, which keeps your personal identity behind a wall, but which has an impact on your reputation.

What do we need to do differently as we get into that world, as communicators? She confessed that she thinks of it “more as a story design experience, for we are building these transmedia storyboards”. And, what is the future playbook of storytelling? As storytellers, we need to welcome them into the experience, helping them shape their story, she felt. What is that one big opportunity in the future of communication? The future of communication is building forward and in a participatory culture, so that we have a choice as to when we want to participate and when we don’t. The more complicated technology gets, the simpler we need to be to the user. The more simpler and comfortable it is, the more we get to be pervasive, ubiquitous in new ways. So, she extended an invitation – “Walk with me into the maniverse!”

Be the first to comment on "SPECTRA 2021: Innovating is the only way to higher success in reputation building"

Be more empathetic, my lord.

Integration of new-age communication tools in the dynamic media landscape