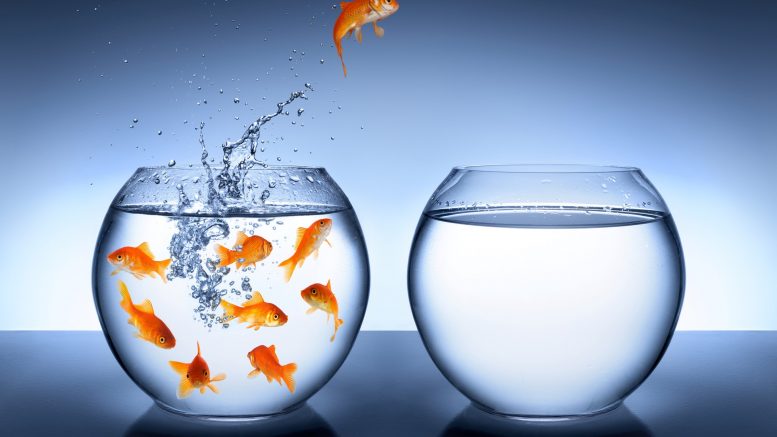 Have you ever taken a leap of faith as far as your career goes?

Well, this is a story where I actually took the leap.

Thanks to the retail company I was working for, I had many opportunities to visit a number of smaller towns (Cat B and Cat C). And I had always marveled how one had to localise both merchandise and store layout to keep the local preferences in mind.

During each such trip, as we drove past villages, I used to wonder what working life in a village would be like. But that is where reality set in, and I had no option but to stop daydreaming! Because it seemed inconceivable that I would ever work in a village.

Then, one fine day, I got a call from an old acquaintance, who I had first met when she was with a leading consulting firm. She had changed jobs and when she called, she was heading one of the best-known international search firms in India.

After exchanging a few pleasantries, we agreed to meet for a cup of coffee.

The coffee arrived and we were chatting about my career. That’s when she suddenly popped the question, ‘Atul, would you like to take a leap of faith?’

I had no idea what she was talking about, and my quizzical expression made that abundantly clear.

She carried on explaining what she had in mind.

‘Atul, would you be interested in an opportunity in microfinance? If yes, I would like you to travel to Hyderabad to meet VA.’

Well, I had heard of VA, for sure. Those days, he was on the cover of practically every business magazine and was seen universally as the poster boy of microfinance. His firm (which was not listed then), was making huge strides in providing finance to underprivileged women in rural India.

Microfinance, as a concept had been pioneered globally by Muhammad Yunus, a Bangladeshi who had set up an institution called Grameen Bank, which advocated a non-profit model of microfinance. He had also been awarded the Nobel Peace Prize for his efforts.

VA’s model was a ‘for profit’ model, and he differed conceptually with Mr Yunus on which model was better.

Anyways, my appetite had been whetted and I expressed my willingness for a preliminary meeting with VA.

My friend said that she would organise the meeting, and a few days later, I found myself winging my way to Hyderabad.

The meeting went off well. VA, an Indian American, came across as a very enthusiastic and passionate person when it came to microfinance. He also came across as a person with a million dreams, and I was suitably impressed. His trademark attire was a kurta with trousers and chappals, which as he explained, were the best things to wear when visiting villages.

VA also explained to me that he was professionalising the firm and told me how both his CEO and COO were former bankers from a leading MNC bank. He spoke very enthusiastically about the firm’s impending IPO and hoped that I would join them. Curiously, he also used the same phrase which my headhunter friend had used.

‘Atul, I know this would be a massive change from your previous assignments but do consider taking a leap of faith!’

I asked him for some time to think this over. He nodded and said, ‘If I have not been able to convince you, please do meet my CEO and COO. They travel to Mumbai very often and you can always ask them about why they made the switch.’

On the flight back, I was thinking about my road trips across the country, when I used to wonder what it would be like working in villages.

On my return, I read up a lot on microfinance, VA and Mr Yunus.

Appetite suitably whetted, I agreed to meet SG and MR (the CEO and COO respectively), after I got a call from Hyderabad asking me about my availability.

On the agreed date, the three of us met at a hotel just outside Mumbai airport.

Just as the conversation was warming up, the CEO got a call and excused himself.

When he walked off to take the call, the COO (MR), asked me if I would like to walk to the smoking zone.

We carried our coffees with us and spent the next 20 minutes chatting about everything under the sun except the jobJ. He spoke of his love for cricket, and how his son was growing up to be a talented cricketer. We spoke of the superb infrastructure in Hyderabad, which according to him, was the cleanest city in India. We also discovered many common friends during this conversation.

Just as the conversation was getting gossipy, the door to the smoking room opened and the CEO (SG) walked in. He apologized for his long absence and asked whether we should go back to our table in the coffee shop and have some more fresh ground coffee!

We returned to our original places, and SG started on the more formal part of the conversation. But before he could ask anything related to the assignment, MR interrupted him.

‘SG, Atul and me have had the most interesting conversation. I think he is perfectly suited for the role. As far as I am concerned, there is nothing more to ask. The ball is now in his court.’

Both of them looked at me waiting for my reaction. The offer had been made and the ball was indeed in my court.

I smiled broadly and said, ‘I am happy to come on board. Send me the formal letter, so that I can start the formalities of exiting my current company.’

I had taken a leap of faith!

Little was I to know then that the next year was to prove the most action-packed year of my entire professional career.

More about that in the next few columns.

2 Comments on "A Leap of Faith"

Budget coverage is not a one-off event; Great stories lie beyond the Finance Minister’s speech

The chronic problems of undercutting and overcharging