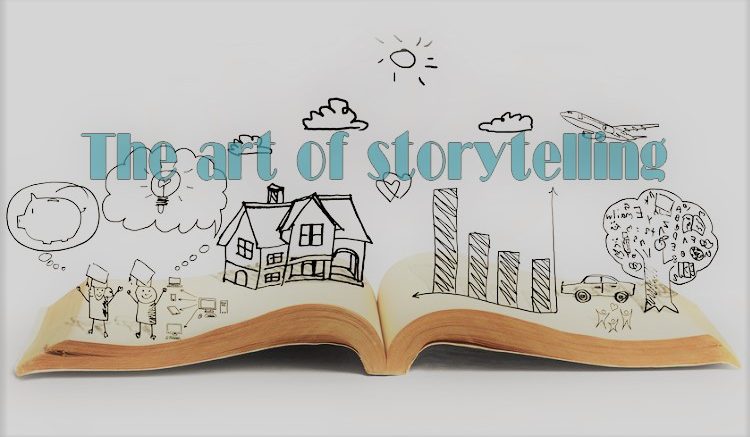 My grandmother had a steady supply of stories (as most grand-mothers in the seventies did!), which she used to narrate to me when I was very young. However, my most favourite story was about their life in Lahore, before they moved to Delhi after partition. She must have started telling me the story when I was a toddler and retold it more than a hundred times but I never got tired of it. In fact, I would insist on listening to that particular one on most days! I had memorised it and would correct her if she deviated from the usual narration even a wee bit. We both loved that time together – she narrating the stories and I listening to her. After more than forty years, I can’t vividly recall some of the stories but always get a nice warm feeling thinking about those times.

Stories are extremely powerful and have been part of human lives for several thousands of years. Last week, while reading about an article on business storytelling, I got transported back to my childhood days and decided to explore if there were any connections between grandmothers’ storytelling techniques and current business storytelling. And finally arrived at a foregone conclusion that an average grandmother is way smarter than most of the so-called storytellers of today. Here are the five storytelling techniques from granny’s kitchen:

Truthfulness: Being truthful is at the core of good storytelling. It does feel oxymoronic that while referring to stories, we talk about truthfulness. However, truthfulness relates to credibility – would you ever believe a story or message delivered by someone who you feel is not telling the truth? Unless the credibility of the storyteller is established the audience does not even pay attention! In hindsight, I think the reason I liked that particular story was because I could see the glow in my grandmother’s eyes every time she narrated the story. Narrating it to a toddler, she didn’t think of sprucing it up or toning it down, the truth just flowed naturally. I can think of a similar example from my career as well. A powerful CEO that I had a chance to work with, used truthfulness wonderfully to get support from his team during the most difficult re-organisation the company ever went through. The growth had been down for the past couple of years and there was no sign of immediate revival. However, the company had over-hired expecting double digit growth rates in the future. The CEO was bold enough to show his vulnerability and openly discussed the issue with his team. Obviously, such situations are never easy to manage, but his approach did help as the employees believed that he was telling the truth.

Emotion: There is a famous saying that people will forget what you said, people will forget what you did, but people will never forget how you make them feel. One of the most important elements of storytelling is emotion. Emotions humanise the story and provide the connect with audiences. When the world has moved to consumption of content primarily through the digital mediums and that too primarily in video and picture formats, the role of emotions cannot be over-emphasised. Emotions create the connection between a storyteller and the audience – it is the glue that makes the story relatable. Go back to any story told to you by your grandparents and you can still feel that warmth, primarily because of the emotional connect. Same stands true for business presentations or key note speeches. Reflect on a couple of examples that you may have loved or consider as outstanding – I am sure you can recall the passion of the storyteller and the many emotions that you may have gone through, while watching it.

Authenticity: Here I would like to make a distinction between truthfulness and authenticity. I refer to authenticity as being true to who you are and staying consistent to your identity. To help understand this concept, imagine an Indian actress who has stayed for several years in India and has a good Indian accent. Suddenly she lands a couple of roles in Hollywood! When she comes back to India and gives TV interviews, you see her talking with a heavy US accent. What would you your first reaction? I would definitely go, “Darling I like you and am proud of your achievements but please drop the fake accent, it is not your true self.” Leaders, brands and corporations need to also first identify who they are and stay consistent to their core. Hint: A small boy correcting even small deviations is his granny’s story.

Audience focussed: Different strokes for different folks is a mantra that all storytellers, especially business storytellers cannot afford to ignore. I wrote an entire article on this topic so I would not belabour this point anymore. If you wish to read the article, here is the link.

Meaning: Meaning makes the stories memorable! People try to look for patterns and interpret stories in their own unique way. If they can relate to the storyteller and the story, they will remember it, believe it and act on it. Whatever your purpose, you can achieve it by weaving a good narrative together in a manner that it not only combines the above four elements but also provides meaning to the audience. The meaning for me in that story was that I could get a glimpse of my family history through it. I could imagine and interpret how life would have been for my grandparents when they were younger.

So, what’s your favourite granny story? Try and analyse it through the above prism and rediscover their magic! A simple way to memorize the above points is to remember that to put together a good story you require “TEAM A”.

When PR becomes a go-to profession