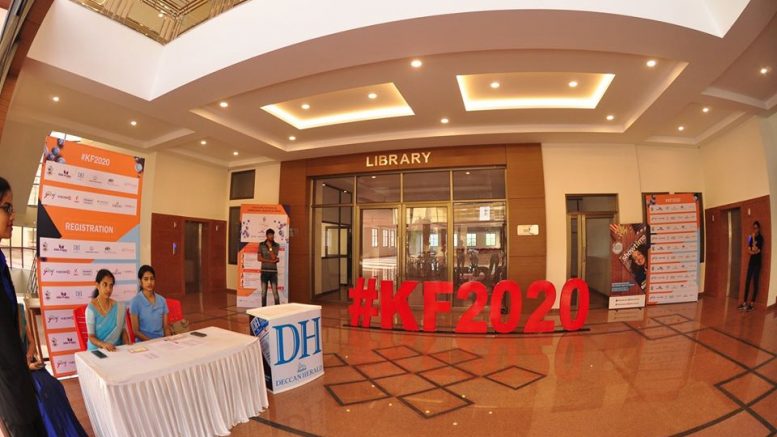 #KF2020, the one of a kind summit or conference put together exclusively with the idea of learning and gaining knowledge, travelled to Mangalore for the 2020 edition at the St Agnes College which was celebrating its centenary year. Curated, ideated and put together by the talented trio – Madhavan Narayanan, Journalist, Meena Vaidyanathan, CEO – niiti Consulting and Amith Prabhu – Founder, Promise Foundation, the summit is a day long festival in the context of Mind, Mischief and More.

I have now had the privilege of being part of two of these festivals and they have been such a wonderful mixed bag of conversations and insights.

This one, had a lot of leadership contexts very relevant to Forward Leap and I bring to you, perspectives from three of the sessions I thought would fit in perfectly.

The first session was Heena Sidhu, First Indian Pistol Shooter to be World #1 in conversation with Meena Vaidyanathan, Founder, niiti Consulting and the session was – Shooting Straight, Playing Hard: the story of a woman who turned an accidental shooter and then a Braveheart.

Heena spoke about how sporting is pure and doesn’t discriminate in any form when it comes to sports people and the sport itself. With reference to her stand on not participating in the airgun competition in Iran because they insisted that she would have to wear a hijab, she said, “If you bring things like religion and regulation based on it, into sport, you are going against the spirit of the sport! Everybody should be vocal for the society to change”.

She also spoke about how there needs to be a support system created for sports and how it should start with the parents. Currently, we have a lot of focus on academics and sports tend to suffer. She highlighted the need for parents focusing on sports with equal merit to it as education. In connection, she also delved into how schools adopting 4-5 sports will also benefit and how this will trigger for change to be implemented.

She also took the audience through the journey of how from being unaware of shooting as a sport to practising in a garage to how she started her career as a professional shooter.

The session had nuanced elements of leadership that travelled through insight, learning, courage and the power of perseverance and resonated on multiple fronts.

The next one in focus was the session just after lunch, usually a tough one to crack and the speaker in the spotlight was Papa CJ. His book Naked has just launched and is a wonderfully fresh autobiography.

He was an ocean of energy as he got on and started off with waking the audience up with jokes and humour. What looked like it would be a stand-up format show, quickly turned tides and he then got the audience to stand up and dance to his tunes, while he danced with the Principal of St Agnes, Sister Jeswina.

He then put on the hat of a story-teller and had the audience gripped to six simple stories of attitude, work ethics, out-of-the-box thinking, attention to detail, value of time and hustling, which was a reminder of what both life and leadership can be and what are the signposts to read and milestones to reach and cross over on our journeys.

Soon after was the interactive question and answer segment, where he went on to peel the layers off the real truth and delved into philosophy, slice of life, comedy and finally gave the entire audience the experience of laughter yoga.

Getting smiles, laughter and a stoic silence from an audience in a short while is no easy feat and Papa CJ had them at hello.

The session is a reminder of many things and he epitomises simplicity, humility and kindness and those in themselves are earmarks of stellar leadership and this makes him stand apart and extraordinarily so …

The last one in context of leadership was the session that had Dr. A Velumani, Founder and Chairman, Thyrocare Technologies speaking about – The Secret Sauce of Achieving Success: What does it take for an entrepreneur to be successful?

In his inimitable style, Dr Velumani took the audience through his journey of life and his story of the village he grew up in, his school and parents and childhood. His years in college, his hunt for a job, his first job, marriage and then starting out as an entrepreneur. I don’t do justice to his talk, I can’t begin to explain the fun and learning packed into his punchlines. Here’s one that he brought to the fore as he spoke about parenting, he said – “Family of Poor: Economically dependent, higher emotions, stronger bonds – Always Enjoys Life. Family of Rich: highly independent, weak emotions, poor bonds – At times enjoys life. Poverty Unites”

As he spoke about his journey as an entrepreneur and running the business, his ideologies about frugality, of providing and creating jobs, of making healthcare cheaper and more accessible all of them struck a chord. He spoke about investing in the business, making the tough decisions and taking calls on what direction the business should take and he said, “In entire world India is cheapest in healthcare. In entire India Thyrocare is the cheapest. But in entire Healthcare Industry, Thyrocare has the highest EBIDTA. The Velu Punch – Profit: Does not come from customers pocket. It comes from Floor Efficiency.”

He went on to share how life is a full circle and how a lot of these learnings can be taken back into our lives and can be put into action for great results. He connected the dots, spoke from his heart and resonated with everyone there.

His style of delivery, his punch lines, his jokes, his unapologetic honesty and his ‘in your face reality’ attitude were all the reasons he got a standing ovation.

Leadership is a lot of things, a lot of ideals, ideologies, theory and practice that co-exist and it’s a journey all of us are on as we learn and live and when you have people like these role models to emulate and imbibe from. I was privileged to be in the presence of these stalwarts who let me in and let me learn and I am grateful that I also get to share this with my little community here.

Hope this was of value and hope to bring to you many more pieces of such snippets in the future columns of Forward Leap.

Purpose – The Why of Everything