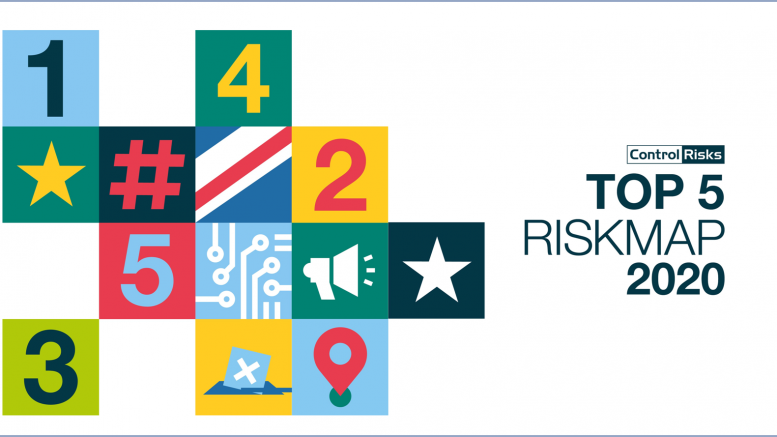 For the first time, Control Risks has revisited our Top 5 risks due to the enormous global impact of Covid19 on the political, security & integrity landscape in 2020. As a firm, we stand by our original Top 5 risks for 2020 – BUT have reordered them, to better align with global realities today.

They are also remarkably relevant to the Indian context today – as we continue to get buffeted by a multitude of threats and risks. The Covid-19 pandemic sits at the core – but the military & geo-political stress with China, the Pakistan variable, the larger global trade impasse, the economic slump in India and the prospect of us revisiting the civil unrest on the back of political decisions take in late 2019 still exists.

At 5 now (it was #3 earlier), Cyber security risks have only been amped up by Covid19. Hackers, activists & state actors get more active as people WFH and resources get stretched. Our border issues with China (and the broader disagreement with them on trade and investments) is dire enough for the Ministry of Home Affairs to have issued a notice advising greater caution against cyber-attacks.

The US elections are now at 4 (it was our #1 risk when we first announced Top 5 risks for 2020 in Dec 2019). The economy is now a liability for Trump, China issues are ramping up, inequity & racism were inherent to the Covid19 debate even before the unfortunate death of George Floyd and resulting protests. The polarisation of the US / China means that sides will have to be taken – like India had to with the support it extended to the US led call for an investigation into WHO’s response to the initial outbreak of Covid-19 in China. That – among other moves – is being called out as one of the reason China deemed it fit to flex its muscle in the Galwan Valley.

Activism moves to 3 (from #2 previously) – as the spread of the pandemic saw multiple civil movements (in Hong Kong, India, Chile etc.) taper off. But with Covid19, activists have found a new catalyst for their cause. Climate change, social justice, D&I, minority right etc are all likely to find their second wind in a world that has been softened by a virulent scourge. In India, we could see demands being made for more transformative ESG policies, greater focus on D&I and ethics by stakeholders. Equally, some of the social unrest might return At 2 now (earlier #4), economic paralysis meets political weakness may emerge as a braided, and potentially knotty, issue to the ruling party at the centre. With a drop off in economic activity and lack of ability to sustain investment in infrastructure, there will be extreme pressure on receipts any way. To top that, the bailout program is likely to add to the economic pain. The rural economy is being seen as a potential saviour; but it all depends on the monsoons.

At 1 we put the impact of Leaders without strategies bungling recovery. This was #5 in the previous rendition of 2020 risks primarily because strong leaders were seen to have found stable ground (on the back of elections in India & UK, and the executive powers they bestowed on themselves in Russia and China in 2019). But that mandate / executive move is no longer seen as a vaccine. Over the last four months, leaders have continued to act unilaterally, disavowing globalisation and leaning further into populism… and not delivered the best optics in the process. Their political priorities stand in stark contrast to the public health catastrophe that has unfolded.

In India, however – the Narendra Modi led government has time. Recovery is almost a given by 2024 – even if the worst-case scenarios play out. What will be a lot more critical will be the pace and quality of the recovery. At 8.5% unemployment, a rising level of inflation, regressive fuel pricing trends, it will take slick economic management and smart political maneuvering to drive out of this morass with the least amount of damage. How quick and smooth the recovery can be, and how effective and long-term the remission – will ultimately decide political futures.