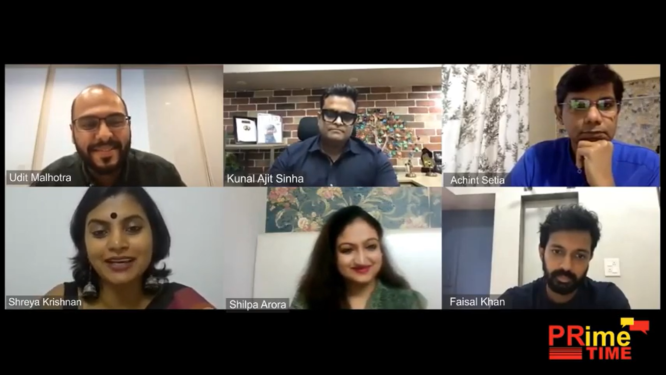 Reputation Today in partnership with ClanConnect organised a webinar on the topic ‘The Future of Influencer Engagement’.  The main panelists were Achint Setia – Myntra, Faisal Khan – MotorBeam, Kunal Kishore Sinha – ClanConnect, Shilpa Arora – ChicLifeByte and Udit Malhotra – MG Motor and the panel was moderated by Shreya Krishnan – Advisor, Promise Foundation and a influencer herself.

Shreya Krishnan opened the webinar by asking the opinion of the panelists about how branding and influence have changed in the last six months. Kunal Kishore Sinha said that as we have new set of audience; brands have started to realise their potential through digital and subject matter experts have become key with meaningful content, their understanding of the market. He also added that the purpose of ClanConnect is to execute a solid campaign and to make the influencer market simple and to make their number meaningful.

Udit Malhotra added that authenticity, transparent opinion & relevant content are the factors that contribute to an effective influencer.

Faisal Khan who is a widely known automobile influencer, started blogging at the age of 17 said that even the luxury car brands are now moving into social media and are open to the idea of being digital savvy. However, there are still some brands who are yet to get there.

Achint Setia was of the opinion that we are in a world where influencing has became a profession as the influencers give knowledge, inspiration and voice to the consumers.

There are over 9 Billion influencers in the Global ecosystem and the number is expected to rise to 25 Billion by 2025. What did this mean to brands?

Achint Setia said that the brands should first research about the ecosystem; they should have a very clear objective and idea while choosing an Influencer.

Influencers should have the ability to think from a third party view, present the content in an appealing way where audience can feel a sense of connectivity and trust.

According to Shilpa Arora the ecosystem and its growth means that our market is developing, making social media and blogging a major factor that can led to growth. Another factor that needs to be noticed is that everyone has an identity of their own so we have to be highly conscious about the content, as it is the king and we should give attention to every detail of the product and the way in which we present it.

The factors that excite the influencers is the evolution in the field of how brands approach influencers said by Udit Malhotra.

Faisal Khan stated that influencers have now become a major part of promotion as it is a less expensive way of communication. The industry is now a more knowledge and experience driven field.

What are influencers looking to build?

Shilpa Arora was of the opinion that she wants quantity, quality content, right target audience and large number of followers as brands prefer that.

Faisal Khan, in addition to the above points also laid emphasis on staying updated at all times.

What are the things to be done to build a better relationship between the brands and influencers?

How do you measure the impact?

Measurement is a big problem as every medium is growing. Everyone should accept the fact that every brand is different and so the content and approach will be different. The commonly used measurement tools are followers, engagement and comments. Udit Malhotra was of the opinion that we need to find a tool to define the measurement prior to campaign. Kunal Kishore Sinha added that collective ownership will lead to real time analysis, expected reach and real time data.

The stand points of the webinar were authenticity, transparency, reach & engagement. The audience was highly participative with over 25 questions coming in for the panelists. The moderator herself posed several interesting questions which helped the panelists to interact well with the audience. All the panelists were open to all the questions and genuine with their words which made the webinar highly informative. Influencing has became an integral part of the modern promotion with content, collaboration, communication and commerce as its base. In a nut shell right amount of influencer attitude, marketing strategy and public engagement can build brand value and strength.

Shwetha. A. Kumar from Cochin, Kerala. A finance graduate & a Post Graduate in Corporate Communications & Advertising from Amrita Vishwa Vidyapeetham, is currently a stude at the School of Communication and Reputation (SCoRe).
She also done a short internship as part of her post graduate programme with Ice Cube Event Management Pvt. Ltd, reported 2018 Kerala flood (article), extension of Kochi Metro (tabloid) & has interviewed and made a feature article about SOS an NGO for magazine.
SHARE TWEET PIN SHARE

Be the first to comment on "#RTPRIMETIME: The Future of Influencer Engagement"