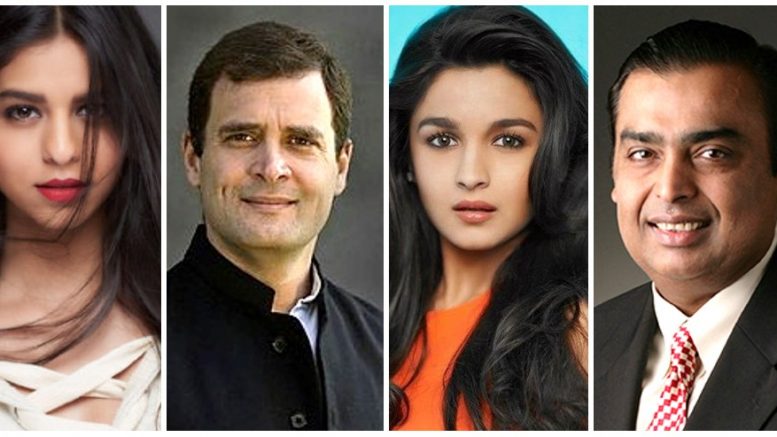 Are journalists gatekeepers of news or are they just messengers? That is an ethical/professional question I grappled with last week after dealing with tricky situations involving the offspring of celebrities. The answer to the original question is “Both” but there is much more to this than a simple answer. Let me deal with some examples to illustrate how.

Suhana Khan, daughter of Bollywood superstar Shah Rukh Khan, made it to the cover of Vogue India (Zoooooooom! Straight! Like that!) and tongues wagged in Delhi (and I suspect, not Mumbai). One columnist promptly called her a “poster girl of nepotism”. I saw understandable rants on Twitter on how such celebrity shoo-ins to a hall of fame goes against those who have to struggle to build a name. Why, even Shah Rukh had to go through that struggle, but his daughter got a gushing welcome tweet from producer-director Karan Johar.

Both politics and show business in India are full of offsprings who get easily into fast lanes. But not all of them deserve journalist hit jobs — for a good reason. If it is unfair for someone to get a chance that makes the playing field uneven, it is possibly equally unfair to dismiss all offspring of achievers as mere inheritors. Prime Minister Narendra Modi took a dig at Congress president Rahul Gandhi as a “naamdaar“  (dynast) in a by-now catchy tag for undeserving inheritors and that, like Suhana, deserves a close look.

My take is that political, business and showbiz journalists routinely report about such “naamdars” without examining the merits of such people partly because they make news from a business point of view. This means the messenger in the journalist plays a second fiddle to the gatekeeper for the sake of daily bread or market pressures.

What is a journalist supposed to do when people love to read, hear or view stuff about the rich, the famous, the powerful, the bold and the beautiful?

I believe that a good journalist can judiciously use details, language, context and length to tell or not tell the story in a way that balances the gatekeeper role with that of the messenger.

On top of all that, media as a whole has the wisdom of the crowd that balances out various errors of judgment.  For instance, no less than the respectable Indian Express carried a lame photo-based story on Suhana and her mother Gauri Khan in New York while another story in News18.com questioning the merit of the Vogue cover brought things to a balance. It is also possible to argue that Suhana Khan and Rahul Gandhi have faced stresses in their childhoods because of their parentage and deserve some soft treatment.

On the other hand, I triggered a lively debate on my Facebook page after sharing a riveting extract in Vanity Fair from a memoir by Lisa Brennan-Jobs, daughter of Apple co-founder Steve Jobs. Fangirls of Jobs were not amused by the dark details of Lisa’s childhood and teenage experiences with her controversial father.

Questions: Is the private life of a professional achiever relevant? Is the woman trying to cash in (if that is the word for a rich heiress) on her father’s name?

My answers: Lisa’s writing is utterly brilliant, showing she has merit (I don’t think she hired a ghostwriter). Her father is considered a great leader and insights into his character from his personal life are relevant in questioning the historic halo around his head. Last but not the least, Jobs even denied parenthood and failed to pick up the tab for Lisa’s early upbringing. A journalist needs to unearth such details. ANI even filed a story based on Lisa’s memoir, highlighting that Jobs had lied about naming a failed computer after Lisa.

My verdict: Lisa deserves credit on merit, unlike Suhana, who got into an elevator that distorted the playing field.

You get an idea now of how we need to see the details. On that ground, I would put Alia Bhatt, Ranbir Kapoor, Mukesh Ambani and Lisa Brennan-Jobs among those whose achievements and talent have shone well despite their getting headstarts, which are not available to newbies in their professions.

Rahul Gandhi and Jahnavi Kapoor, daughter of Sridevi, may be getting there, but the jury is still out.

Beyond all that, my personal Oscars would go to Amitabh Bachchan and Deepika Padukone. I knew Amitabh as the struggling son of poet Harivanshrai Bachchan at high school. When I grew up, they said the poet was the superstar’s father. Prakash Padukone was the national badminton champion, but Deepika arrived in Mumbai to begin a struggle and earned herself a name that would make historians put her ahead of her famous father. Ms. Padukone and Le Bachchan chose to enter an industry away from the those of their fathers. They are real ‘kaamdars’ (achievers) and not mere ‘naamdars’.

The journalist’s job is to use their skills to arrive at the right fame-to-notoriety ratio for the people s/he writes about, based on merits and constraints of the marketplace. It is an art, not a science.

Be the first to comment on "Suhana, Lisa, Rahul, Alia, Mukesh & Deepika: It’s time to learn the shades of grey among celebrity offspring"

Year of the micro-influencers. Is it?

The Meeting of Science, Superheros and Public Relations Professionals