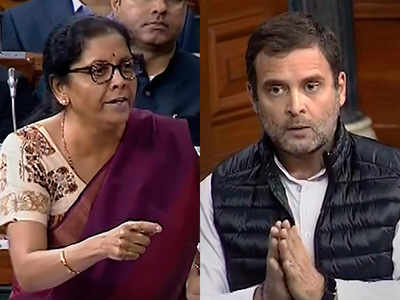 Pic Source: The Times of India

Small actions can create big headlines. Which is why most parliamentarians take their moments in the parliament as opportunities to set agendas, stories and perception. Here’s a look at some events of the 16th Lok Sabha, which have had a greater significance than what may appear:

Allegations of corruption in Rafale Aircraft deals have caused firestorms inside the parliament and out. On one hand the attack, led mostly by Rahul Gandhi, had him blurting incoherent and inconsistent details. Unfortunately for the common man, those are the specifics they got to hear. No voice I’d authority or expertise reached them, just garbled noise. A detailed response was warranted and Defence Minister Nirmala Sitharaman gave just that in the parliament.
The heated debate lasted nearly two hours and Sitharaman’s ability to navigate the disruptions was commendable.
But the most striking part was the specificity and documentation presented. In an ideal world that would be the reference point for debates on Rafale, instead of arbitrary press conferences.

To the best of my knowledge, never in the Indian parliament has a significant member of the opposition walked across the well of the parliament and hugged the PM. Rahul Gandhi managed to pull this first, advocating affection (and public display of it) as the ideal response to PM Modi’s characteristic scathing attacks.
It was more than just Gandhi emulating Modi’s Hugplomacy (I’ve written about how effective it has been, here) It was also successful as it took the focus away from a mega win for the NDA, the same day – their overwhelming victory in a no confidence motion. In hindsight, more is spoken about the hug from that budget session of the parliament, than the fact that the opposition instigated a fight which went in NDA’s favour with 325/451 votes. That’s a good pivot.

3. Something for the Middle Class
One of the most common points of criticism against the NDA government, especially by their own supporters has been the limited efforts made for the benefit of the Indian middle class – the silent majority, slated to be a significant portion of their voter base. Of course arguably, the perception maybe because development efforts tend to be scattered, making any improvement in standards of living difficult to measure. But perception matters.
In the budget session of 2019, the interim finance minister Piyush Goyal addressed that false perception. As he thanked the averge Indian tax payer for bearing the weight of the economy, he announced increased tax rebates, making incomes as high as 8 lakh per annum, tax free. That is the Indian middle class. These token words and actions sent out a message that fragmented efforts could not.

Mulayam Singh Yadav aka Netaji is the erstwhile supremo of Samajwadi Party one of India’s four national parties, and has for a long time been Goliath in UP. His words, actions and influence carry immense weight not just in India’s largest state but nationwide.

So during the last session of this parliament last week, when Netaji said the following, Sonia Gandhi (sitting next to him) visibly cringed and Modi did a Namaskar and the rest of the parliament cheered in surprise:

“I want to congratulate the prime minister that he tried to move ahead taking everyone along,” he said. “I hope all members to win and return, and you [Modi] become prime minister again.”

Possibly it’s just rhetorical, and a very senior leader with nothing to lose just messing with his colleagues, just for kicks. But it could be sending some significant messages. He has let his party know that his support and influence isn’t a given. Two years ago, his son, Akhilesh Yadav battled him to take control of the party. The election commission of India had to intervene to decide who gets to use the party logo. Netaji had to step back and cede, of which a politician of his stature can’t be too happy, it’s the next best thing to losing relevance completely. With that statement in the parliament he’s indicating that he’ll muster up whatever power he has left.

5. Missed opportunities
The current government enjoys the strongest Majority that the parliament has seen in a long time. They’ve had the power to change the constitution with ease and they have. Despite that, two controversial yet crucial legislations lapsed with this parliament. With all the promises of woman empowerment with which this government came to power, no substantial actions or even intentions were shown to abolish the practice of Triple Talaq (something that’s banned in most Islamic countries). The possibility of a Uniform Civil Code were distant but our legislators consciously distanced themselves from it entirely. Legislative process takes a long time and for these and many other laws, we have come back to the square one due to the inaction and apathy of the current government.

Most of these are seasoned politicians, characteristically dextrous orators, and there’s much to learn how to navigate an audience that’s particularly hostile. In my next post I will list five parliamentarians who do this very well.

The power of creativity in Public Relations