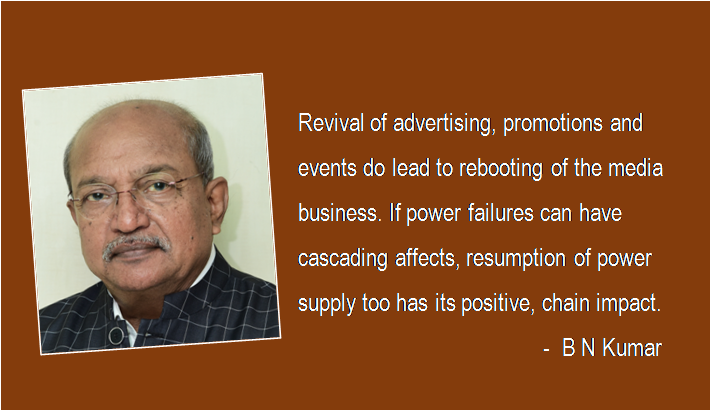 With over 120 days of COVID-triggered lockdown, this question must be bothering everyone’s minds – can media business be revived? If yes, when?

The threats of pay cuts and job losses, which hovered over across the community, loomed large as the lockdowns got extended and the final blow is yet to come. The last major announcement being from The Hindu group, media professionals fear, the worst is still not over. As an observer from outside the ring or in the commentary box, I cannot even scream: And, he is out. It will be cruel. Many ‘masala’ journalists (and I can say this with authority with my 45 years of experience) are like undertakers thriving on negative developments. But when it comes to their own survival, it is all deathly silence. Except for a group of Mumbai-based The Hindu journalists, we haven’t heard anyone raising voice, except for murmurs in social media or just as-a-matter-fact reporting by some websites?

Difficult. Difficult because most media professionals are engaged on contract and media organisations have been steadfastly skipping implementation of the government-appointed wage board recommendations. The wage-board covered employees do have (or had) some sense of job security, while those on contracts enjoy large pay-packets with several risk factors. In this context, the community as a whole is now forced to have a relook into the recruitment pattern and structure.

Media Houses and business forums including the ones led by journalists have been seeking favours from the government either directly or indirectly without even bothering about protecting jobs of their employees. In fact, some journalist organisations have asked the government not to give advertisements to those media houses resorting to retrenchment.

Yes, everyone looks to government for relief and support. Why not, isn’t the media business is akin to any other business or MSME? One the one hand the media supports the arguments against subsidies and leaving the price movements to market forces, while on the other it seeks reliefs from the government. The favours do not come free. As my childhood favourite James Hadley Chase wrote: There Is Always a Price Tag!

Having said that it is about time that media started discussing the ways to revive jobs and restart publications that were shut during the last four months.

Automobile, real estate, telecom, FMCG, travel and tourism have been traditionally the big spenders on ads, promotions and events. As an observer of real estate for years, let me point out the revival of this business can have a cyclic effect. Real estate is linked to some 300 industries such as steel, cement, electric goods, tiles, transport and what have you apart from being capital and labour intensive. It can directly and indirectly create six crore jobs, as JLL says. It is not too long ago that one used to see real estate jacket ads in week-end newspapers. In fact, some readers would grumble that they had to wade through six front pages before they actually got to the real page-1 of the newspaper! Yes, real estate can bring back that magic. Don’t worry about rogue builders as RERA takes care of them.

Now examine the cyclic effect. While all the industries mentioned here get to reboot themselves, home-loan finance companies (yes, banks included) too visualise boost as both buyers and builders will go for financing.

A new home buyer does not rest with the roof and four walls. He goes for new home shopping. Buys a new TV set, refrigerator, goes for energy saver electric fittings, furnishing, curtains and some extent of interiors work. And I have’t yet discussed how people even go for new vehicles.

Once jobs are back and salaries are credited to banks, people will restart planning their vacations, festival spends and celebrations.

Social media, to some extent, has supplemented the sources of the news. But the printed word still enjoys its credibility. Everybody still loves to read what is printed. Everybody loves to see the revival of newspapers and the rest of the media.

News is the soul of media, advertising is oxygen, promotion is blood. #ReviveAdvertisingReviveMedia.

While the world waits for the hope vaccine, I am preparing to delete the year 2020 from my calendar.

As I type this, the pre-March 22 scenario runs like dream sequence from a Bollywood thriller with each industry contributing to the other’s survival and growth and many happy faces (without the masks) all around.

What makes you feel seen?

The rise and rise of combative populism: CNN and Trump seem to be made for each other