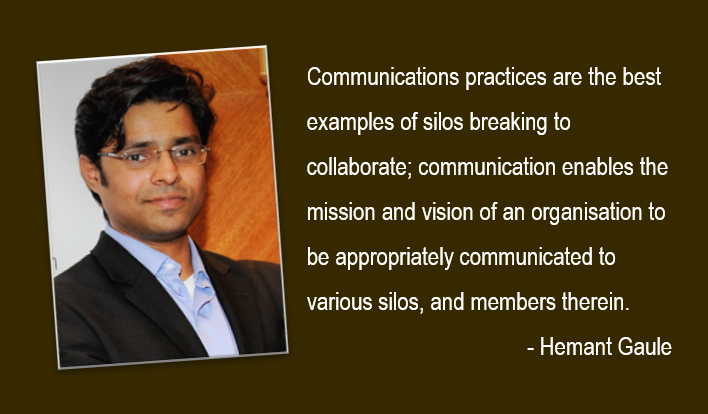 For organisations to grow, it is imperative for new skills to emerge and specialise in their disciplines. It is also natural for these disciplines to subsequently diverge and ultimately fragment into silos. How do these silos influence an organisations ability to grow further? To respond to changes? What is the impact of organisational purpose, and the implications on brand communications?

This was the theme of conclave by the Media, Corporate Communications & Public Relations Committee (MCCPR) at the Bombay Chamber of Commerce and Industry, June 2019 in Mumbai. The Chamber, founded 183 years ago, itself has been a source of many ideas and insights, and as Bharat Vasani, Former General Counsel of Tata Group said in his opening remarks at the conclave, flourishing “from British Raj to Modi Raj, they must be doing something right”. I discuss some key questions that were raised and debated at the conclave:

How do Silos impact organisations? 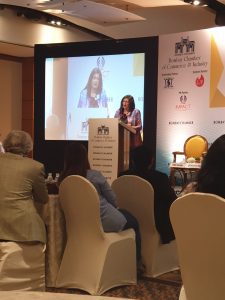 The context was set by Roma Balwani, Senior Advisor, Vedanta Ltd. and the curator of the event, who highlighted concerns that emerge from silos – how they can be adverse to flow of organisational culture and information, and subsequently halt Innovation, Collaboration, Progress and Productivity. And it is the leadership that can enable flow of information to bridge these gaps. When leaders build bridges, silos get broken and stakeholders get a common voice that speaks to all.

Sam Balsara, CMD, Madison World presented a flipside. ‘Siloing’ leads to specialisation, and development of a cadre of people who are experts and recognised as experts. It helps break down jobs and responsibilities, and by doing it repetitively, experts are able to refine them and bring in efficiency and creativity.

However, to ultimately grow, organisations need the ability to collaborate across these silos. And experts collaborating with experts is enabled by culture and leadership; not just a virtue of necessity or ambition. 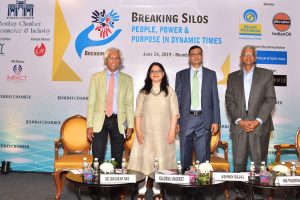 The idea of a common purpose, that ties an organisation together, has always existed but is getting increased attention now. More internal and external stakeholders are aware of it, are talking about it and are demanding it. Millennials, for instance, give high regard to what a company stands for, from the perspectives of employees or customer. And it’s not just profits.

Companies are realising that they have to strike a balance between corporate profitability and social responsibility. The focus of their purpose has shifted from exclusively ‘creating shareholder value’, to ESG – Environment, Social and Governance, pointed out Ashwin Bajaj, Senior VP, Head – Investor Relations for the Energy Companies at Adani Group. He also highlighted how companies with higher focus on ESG tend to perform well on MCX. Furthermore as pointed out by Kalpana Unadkat, Partner, Khaitan & Co., media has played a crucial role in bringing more focus to governance and CSR orientation. Every action an organisation takes is being increasingly seen from these lenses now.

However, there is often a sizeable difference between how purpose is stated and how it is practiced. Dr. Bhaskar Das, Group President, Republic TV Network observed that organisations are hesitant in walking the talk. Dr. Das illustrated how this employee – organisation disconnect manifests; when an organisation’s focus is on certain ideas, instead of how it should be:

Is ‘Purpose’ more than just words?

Minari Shah, Director – Public Relations, Amazon India, explained how purpose is a living and breathing principle at Amazon – “what’s in it for the customers”. And these are not just words, but part of daily conversations where a general rule of thumb can guide several decisions – “work customers backwards”. Perhaps such simplicity and depth of purpose is achieved after years of refining and communications. In a large conglomerate such as the Tata Sons, that have grown over decades, it was often discovered in retrospect, points out Kashmira Mewawala, Head – Business Development & Chief Ethics Counsellor, Tata Capital.

The challenge is communicating a complex purpose statement across geographies, peoples and time zones. Organisations need to articulate an exclusive purpose that people can align to. When you make the purpose bigger than you/your products, people gravitate. Language is key to breaking silos – framing the purpose in a manner that is simple and something that applies to various business units, verticals etc. Furthermore, Trust is crucial, as Minari put it – “What you do when no one’s watching” matters.

The power of brand value – and leadership conversations that drive it

Brands are some of the biggest assets that organisations can own. The question is (especially for communicators) – how to create a brand that stands in the long term, cost effectively. Sam Balsara referred to the 1960s-80s, when Indian industrialists were apprehensive of spending on brand building. Surprisingly it was the efforts and investments of a local brands such as Nirma, that showed that the power of brands is exponential, and can transcend socio-geographical boundaries; where influence cannot reach.

In addition to that, Millennials and now Generation Z increasingly consider brands as extensions of their identity, pointed out Nandini Das CEO, Lodestar UM India. What a brand stands for, and what it does to achieve it can cement loyalty of stakeholders.

This is why communications practices are the best example of silos breaking to collaborate; as it enables the mission and vision of the organisations to be appropriately communicated to various silos, and members therein.

In today’s fast changing environment, it is imperative to respond to needs quickly and deploy any kind of solution that’s required. Technology has helped organisations build bridges and manage silos in several remarkable ways. And Indian organisations have demonstrated that they are nimbler, faster in understanding the value of technology, its ROI and deploying it. For instance, there are organisations using artificial intelligence in their customer response management – to detect the mood and need of a client calling their customer support, and diverting the call to a specific type of representative best suited to address it. With AI making understanding of stakeholders finer and blockchain technologies enabling flow of data in unprecedented ways, technologies are there – just the solutions remain to be imagined.

Be the first to comment on "Breaking Silos – People, Power & Purpose in Dynamic Times"

Oblivious to the Obvious