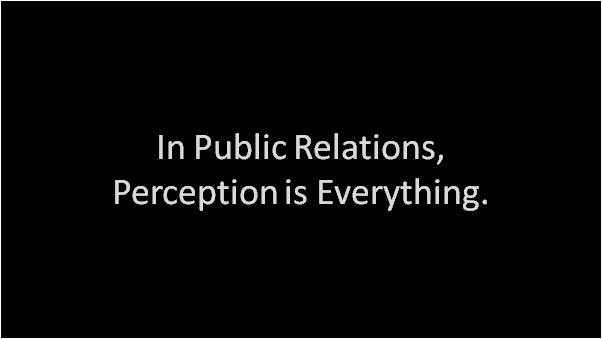 There are sweeping statements made by political leaders, almost on a daily basis. The US President Donald Trump said, a few days ago that he stands “ready to fix the nuclear threat posed by North Korea, with or without China”. And, closer home, Delhi chief minister and Aam Aadmi Party (AAP) chief Arvind Kejriwal has said his party “will make Delhi look like London” if AAP is voted to power in the upcoming municipal polls. How much of an impact will these have on the electorate? What is the perceived notion that all this is building up, in the eyes of the public?

Politics has been upfront in our country, specially after the BJP had a clean sweep over the recent elections. PR has played a prominent role. What is important is that in PR, perception is EVERYTHING.

In the political waves that is over-riding the country and in PR, we can notice some common points:

In politics and PR, perception is reality. In the 2014 elections in India, the BJP sailed through because the general public were disgruntled with the Congress government and because of the perception that the BJP party promised and convinced the voters of. This perception became a reality for the voters.

And election seasons, do provide daily lessons in PR, story-telling, and shaping a narrative. During the recent US Presidental elections, there was a point when Hillary Clinton declared victory when no one knew if she had won or not! Since 1960, it is seen in US, that PR is what wins elections. The 1960 presidential debate, the first televised debate in history, between John F. Kennedy and Richard Nixon changed the world. Radio listeners declared Nixon the winner. Television viewers almost unanimously declared Kennedy the winner. It was JFK’s body language and demeanour that connected with voters.

From that moment, when the winning candidate is declared, image is everything. Issues matter, but many voters base many of their decisions on trust, confidence and feel. Ask the average voter, even after the demonetisation episode, he or she is convinced that the current governing party will deliver in the long run. And, consistently, anyone standing in those long, never-ending lines ahead of an ATM, was willing to overlook a few days of discomfort, if all this would lead to a greater, more productive India.

The voting public want transparency today, and they want the assurance, that the ruling party will indeed take the country forward.

It is seen today that social media gives us more access than ever to candidates. Because of that, we no longer look at candidates on a surface level. We demand, we want them to share as much as they can with us. Voters are more likely to forgive mistakes, if that candidate is transparent. All of the successful candidates this election cycle are using social media and transparency to connect with voters. What’s becoming increasingly a fact with brands and companies has become true in politics, too.

For the MDC polls, we can see that social media – Facebook, WhatsApp now play key roles. Breaking from traditional methods, social media is playing a huge role in the civic polls. Using WhatsApp groups to maximise outreach to conducting Facebook live sessions, the parties are going all out, to reach out to the target audience. Touted to be a triangular contest with BJP, Congress, and AAP as the major contenders, the civic polls to be held on April 23 have gone bigger with JD (U), BSP, Yogendra Yadav led Swaraj India, and Samajwadi Party joining in the fray.

Learning from the success of online and social media campaigns ahead of the 2014 general elections, Delhi BJP takes on political rivals in the virtual world. Things have changed since the last civic poll, and, for the first time in the civic polls, online battles are also being fought.

This is where, we can see that public relations still makes its mark in helping to shape the narrative. And, what are the lessons learnt here? Perhaps, we can come back to this after the elections are through.