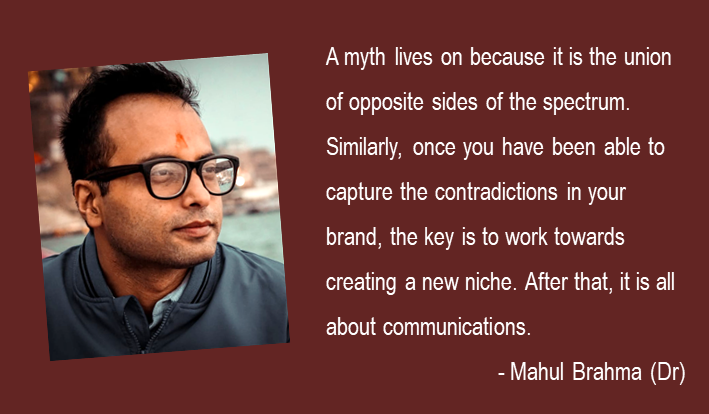 Anthropologist Claude Levi Strauss in his paper on the structural study of myth wrote that myths are still widely interpreted in conflicting ways: collective dreams, the outcome of a kind of aesthetic play, the foundation of ritual. Mythological figures are considered as personified abstractions, divinised heroes or decayed gods. Whatever the hypothesis, the choice amounts to reducing mythology either to an idle play or to a coarse kind of speculation.

So what makes myths timeless? The key behind the timelessness of a myth is that it embodies a contradiction. A myth lives on because it is a union of the opposite sides of the spectrum.

So once you have been able to capture the contradictions in your brand the key is to work towards creating a new niche.  After that, it is all about communications.

So go ahead and make your brand mythic.

Prof (Dr.) Mahul Brahma is a Professor and Dean of School of Media and Communications at Adamas University. Dr Brahma was Chief Editor and Head of CSR, Corporate Communications and Branding, Publishing and Conferences for a Tata Steel and SAIL JV, mjunction. He is a D.Litt in luxury and communications, and a PhD in Economics. He is a TEDx speaker on mythic value of luxury.

He won Crisis Communications Leader of the Year Award in 2021 and several other national-level awards in communications and CSR. He is a luxury commentator and award-winning author of five books – How to Communicate Strategically in Corporate World, the Luxe Trilogy (Decoding Luxe, Dark Luxe and Luxe Inferno) and Quarantined: Love in the time of Corona. He is an alumnus of Indian Institute of Management - Calcutta, St Xavier’s College, MICA, SSSUTMS, and University of Cambridge Judge Business School. He loves to play golf and paint.
SHARE TWEET PIN SHARE

Employee sensitivity in a crisis

Two negative triggers to think of a credible corporate story

ROI is “Return of Influence”