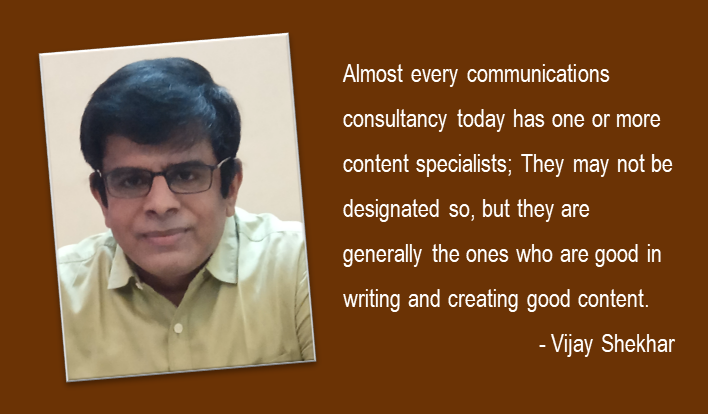 There has been a lot of debate on whether paid / surrogate spaces for Corporates in various editorial sections of the media is good or bad. Given the PR / Communications scenario in our country where nothing much has changed in terms of client demands over the years, such paid spaces can bring back some thankfulness to a Communications Executive’s job.

Is it just about good content and media relationships?

Many would still believe, or rather force themselves to believe that if the content is good and customised to each media’s style and / or the media relationship is good, there’s no reason why a good Corporate story should not make it to the media. Almost every communications consultancy today has one or more content specialists…they may not be designated so, but they are generally the ones who are good in writing and creating good content.

Imagine this…so many good content writers, so many good write-ups, so many beautiful media relationships; but only a handful of good media (in PR terminology, Cat A media). How is it practically possible and feasible for every good content to make it to the good media? The result…fuming clients; frustrated Communications executives; threat of losing accounts; blame games and cover-ups. It’s a similar story across consultancies.

Why does this happen?

Let’s take an example. A popular snack brand is launching a new range of biscuits. The Marketing Communications Head calls the Advertising and the PR agencies for a brief. The same brief is given to both…about the new range, the intent, product attributes, USP, target audience, core messaging, pricing, timelines etc. After the briefing, both the agencies’ representatives go back to their respective offices. In a weeks’ time, the Advertisement agency comes back with a print and / or TV campaign; and the PR agency comes back with that excellently written Press Release. There’s a lot of back and forth between the client and the advertisement agency on the ad campaign…and finally the ad is APPROVED by the client. And once the ad is approved, the advertisement agency heaves a sigh of relief and breathes easy on it. Now the Press Release…even this sees some back and forth between the client and the PR firm, after which it’s APPROVED by the client. And once it’s approved is when the real pressure and tension starts building up for the PR consultancy and its representatives.

An ad campaign can be a good one, average one or a bad one…and so can be a Press Release. But irrespective of whether it’s good, average or bad, an ad will definitely make it to the media spaces that have been paid for it, unless of course there is some derogatory or immoral content in it. But it’s not so for a Press Release. Many a time a well-written and customised Press Release makes it to a good media as a small snippet, or doesn’t make it at all. And then starts the bitterness in the client – consultancy relationship.

The lure of Traditional Media

In my close to 21 years of experience as a PR / Communications professional, I have seen consultancy personnel shifting gears from Traditional PR to the growing importance of social media and the digital medium during conversations with clients and prospects. And the latter always seem to be impressed and bought-in. But somewhere down the line, it’s back to the good old traditional media demands, wherein the agencies are constantly subject to ‘Where’s my coverage in Hindustan Times / Dainik Bhaskar (if it’s Delhi); The Times of India / Loksatta (if it’s Bombay); The Hindu / Daily Thanthi (if it’s Chennai); The Telegraph / Anandabazar Patrika (if it’s Calcutta)?’ and so on and so forth.

Digital and social media actually enjoys a buy-in among only a handful of clients and prospects. There are also instances where a client is very digi-savvy, but still wants to see himself in a print media, just because ‘his mother reads that particular newspaper, and he wants to be there so that his mother can feel more proud of him’.

One thing is clear…however much we talk or act digital, the traditional print media is not going to go anytime soon.

The case for paid editorial spaces for Corporates

In a consultancy set-up, I have seen executives write excellent content. Some of these contents have been abundantly appreciated by the clients and internally. But unfortunately, the media never acknowledges it…and rightfully so, because they have very limited space with them. So they rip apart that content and use a miniscule part of it or don’t use it at all. And when the content does not make it to the media spaces the way it is supposed to make it, it suddenly loses value in the eyes of everyone.

In such a scenario, paid editorial spaces for Corporates can bring back the much needed thankfulness to a PR professional’s job. Just to give an example…one of our clients once agreed to do an advertorial with a leading publication. Monies and billing were frozen upon. And we put an executive who was good with writing to do the content. Once the article was approved internally and by the client, the executive e-mailed it to the correspondent in the publication with whom he was dealing for the advertorial. The correspondent replied ‘fantabulously written piece’. Never before had our executive received such a compliment from the media, despite always delivering good write-ups.

Social media and your mind