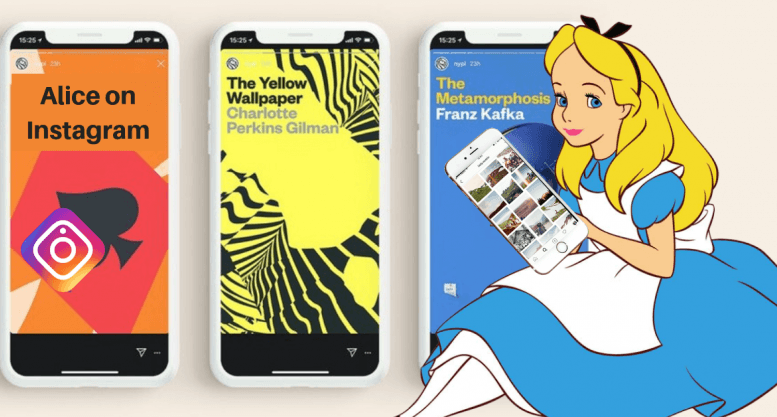 A couple of weeks ago, my 10-year-old daughter asked me about my favourite books.  Thankfully, she loves to read and was curious about the books I used to read when I was her age. She wanted to read some of them! Frankly I was unable to exactly recall, which books I read when I was her age, but I suggested that she read Alice’s Adventures in Wonderland and Through the Looking-Glass, which are among my favourites. I looked around in my bookshelf, found the books, now in a dilapidated condition, and handed them to her.

Instinctively I knew she would not like to read the old editions, and started searching for a more engaging alternative (not a movie!). I googled a few terms, and, voila, I found a digitized version of Alice’s Adventures in Wonderland. And, surprisingly, in the most unexpected place – the New York Public Library’s (NYPL) Insta Novels program. Instagram is the last place one would expect NYPL to put books on, and especially classics like Alice’s Adventures in Wonderland.

While we may not (yet!) want her to read the book on the mobile device (there are very strict rules to limit her screen time ☺), it is an interesting trend that required more investigation.

The NYPL launched its Insta Novels program in August 2018 and has released several iconic novels since then. I found these Insta Novels to be simply stunning! They have fully colour illustrations and moving animations, which make them visually appealing. Not surprisingly, the program has been a major success. More than 3,00,000 people have read these novels and NYPL has gained more than 1,00,000 new followers. That’s quite a feat and shows that NYPL has been a smart marketer. They recognised that their customers have moved to mobile devices and that fewer and fewer people are reading novels. In addition, given the shorter attention spans and the several other options competing for the share of time, engaging formats and content is required to bring in more readers.

Insta Novels reminded me of Cell Phone Novels, which began in Japan couple of years ago. I had read about the Cell Phone Novels in the book, The Network is Your Customer, by Professor David Rogers. In the chapter on Engage strategy, Professor Rogers gives the example of these unique novels (keitai shosetsu), which are text novels and each chapter in the novel is less than 100 words. These became a big rage with youngsters, especially with young women who had time in hand while commuting in trains. A website called Maho-i-Land, which is used most often by the writers of these Cell Phone Novels receives 3.5 billion visits per month!! Many of the most read online novels are being converted to print format and becoming best sellers. That’s the power of converting the format to one used by the prospective customers and creating compelling content. The content of these novels is far from being literary, but that hardly matters!

Another rage is Wattpad, which (according to Wikipedia) is an Internet community for readers and writers to publish new user-generated stories in different genres, including classics, general fiction, historical fiction, non-fiction, poetry, fan-fiction, spiritual, humor, and teen fiction. The website claims to have a loyal base of 80 million readers, which is believable. An example of a bestseller after being posted on Wattpad is After. This erotic tale has since been read more than 1.5 billion times on Wattpad. It is now also a bestselling book series, after being printed, with 11 million copies sold. Wattpad is now acting as an agent for the writers and is brokering million dollar deals for them with publishers.

To conclude this article, let’s explore what are the lessons that marketers can learn from these innovative formats of creating and packaging content. For that, let’s turn once again to Professor Rogers and his book, The Network is Your Customer. In the chapter on how to create engaging content he talks of five strategies.

In my future articles, I will try and write in more detail on these strategies. But for now, wishing all you a Happy New Year and hoping that all of us read more books!