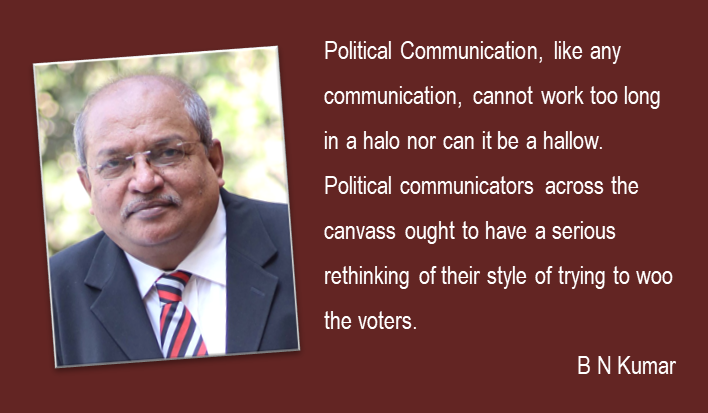 In Andhra, the word ‘waste’ is used for useless people. I have almost forgotten it, having left the shores of the mighty Godavari in 1970. But, an Andhrite whom I met last month, punctuated his expressions about certain leaders with the word ‘waste’.

Come to think of it, much of the political communication that is used during the elections goes waste if it is not matched up with performance. Much as it is true for a detergent or a saree, the dictat is valid for political branding and the promise the brand makes.

While young voters might have been enamored by “Yes, we can” or “Ab Ki Baar” – in different contexts, of course – results have conclusively shown that the templated campaign does not work. Political strategists have to keep in mind that formulas such as ‘divide and rule’, vote bank politics, appeasements, packages or invoking gods have their limited appeal. A crowd surging in Tirupati Balaji temple would shout “Govinda, Govinda”, but the same devotees in the Shirdi queue say “Sadguru Sainath Ki Jai”. Isn’t that a small lesson in communication?

The analytics, if anyone takes them seriously, will clearly demonstrate that dramatics have their own limitations. Almost all political parties have their IT wings and it is time that they put them to right use rather than garnering social media support. Social media numbers do not get dollars or rupees and they do not fetch votes either! The hype lasts till the next one – just like the tide that we see in the Arabian Sea or Bay of Bengal.

Political communicators across the canvass ought to have a serious rethinking of their style of trying to woo the voters. The audience at rallies may clap and cheer at certain announcements from the dais – mostly due to the entertainment value – but the fun lasts till they get to hear another leader from another party.

I like the marketing example analyst Yogendra Yadav presented after the 2014 poll results. He spoke about the man who had won by timing his communication, cleverly. He found the gap amid all despair around and used his ortatory skills to fill that. He gave rise to a big balloon of hope. I will not go into the economics, defense or politics of governance, but try to analyse the communication aspects.

TINA (There Is No Alternative) factor worked for some time for some. Voters have been trying alternatives in the South. As new generations of voters and leaders emerge, across the nations, their respective tactics will also evolve. History teaches us this. It is not the mistake of history, if we do not learn.

To use another analogy, an investor looking at chipping into a stat-up always looks at the RoI factor. Indian voter is like that intelligent investor. Period.

During crisis times like this, rhetoric has limited appeal. We may not get time or opportunity to discuss what went wrong for whom as we get bogged down by wave after wave of the pandemic. Right now, the priority for all of us must be to work individually so that we can collectively get out of the crisis.

Talking of the crisis, I think the entire political class failed miserably in COVID related crisis communication. And what was the message they tried to send through the election rallies, addressing crowds, sans the mask and above all the Kumbh and the IPL matches? Wasn’t all these in direct contrast to what the COVID protocol envisages?

Luckily, the courts came in to set things right. Otherwise, You-Too kind of slugfest would have continued instead of the government focusing on O2.

Decoding the Art of Storytelling in the Indian Market