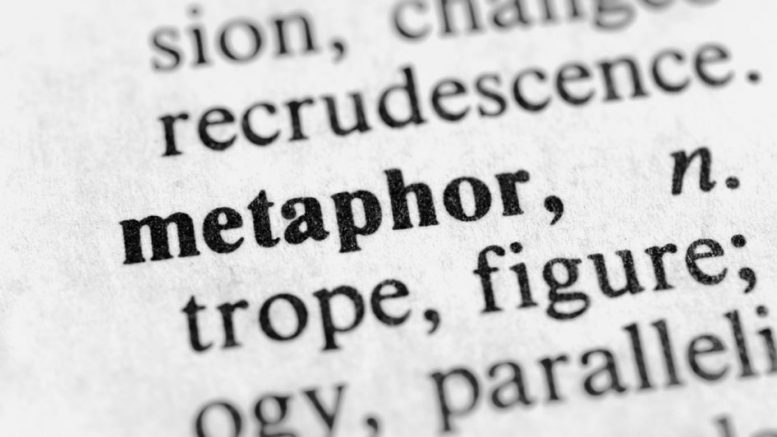 Warren Buffet’s annual letters to analysts and Berkshire Hathaway shareholders is looked forward to for its wit, wisdom and insights. He is a lifelong student of communication, and uses metaphorical references consistently to explain complex financial topics. Frequently asked why almost 90 per cent of his investments are made in the US, he says, “America’s economic soil remains fertile”. This five-word metaphor allows him to communicate, simply, an explanation that could be a few books. Closer home, Mukesh Ambani, Chairman Reliance Industries Limited, describes ‘data as the new oil’ – this reflects on the kind of value that data embodies in the contemporary digital world. That, my friends, is the beauty of metaphor and how communicators can help their organisations and senior management use it to deliver complex messages and inspire action.

Metaphors have been potent instruments for politicians to communicate their ideology, and Aristotle promoted the use of metaphors as a component of persuasion more than 2000 years ago in his various works, especially ‘The Rhetoric”.  Metaphors have the ability to carry implicit meanings and rouse emotions in the audience, they scaffold how we view or understand issues by highlighting selective points of view. It can underscore preferred aspects of the message, create a conceived reality and shroud the others.

From the perspective of storytelling, metaphors are literary devices through which we describe one thing in terms of another – in just a few words, an appropriate metaphor can give us a big picture and speak volumes about an event or situation. William Shakespeare was a master of metaphor and used it to create special effects or feeling – In Sonnet 50, “How Heavy Do I Journey on the Way,” he metaphorically depicts the process of grieving from the loss of a dear friend as a journey that moves him from one emotional state to another: “My grief lies onward and my joy behind.” The journey is painted as arduous and one that needs excessive effort: “The beast that bears me, tired with my woe, plods dully on, to bear that weight in me”. Prominent linguists have spoken about metaphors as being much more than just a literary device. They argue that metaphors are in fact a mechanism enabling people to understand one kind of thing, particularly something abstract, in terms of another thing that is more familiar and based on direct experience.

Metaphors create resonance in the message. Speaking scientifically, ‘resonance’ is a response – when two things are linked in some way or somehow touching, and then one taps or vibrates or oscillates and the other responds at that same frequency. A resonant metaphor creates the most ‘natural’ impact on an individual. Some of the features of ‘resonant metaphors’ that can be used to craft messages that drive enabling belief and action are:

Leaders must understand that generating novel variations of common concepts and establishing relations between distant concepts is one way to harvest creative ideas. In the current age of digital communication, our intrinsic understanding of communication using metaphors can increase the impact of our message. We can craft messages in a way that they become quicker to catch, videos become more engaging and humour can be used more pervasively to make our target audience happier and want to hear more from us.

While metaphors do help in simplification, it is important to keep in mind that often there is also a downside to a strong metaphor – it can create a false sense of understanding. For instance, President Donald Trump describes existing massive refugee flows coming into his country as “immigration is a ﬂood”. By comparing immigration to a flood, he not only contributes to a myth that it is uncontrollable and as damaging as a natural catastrophe, he dehumanises migrants, eliminating any feelings of empathy for them among the citizens of America. Given the US history of hurricanes, the issue of ‘ﬂooding’ is also hugely ominous and contextual.

Communicators can help their leaders explore metaphors that come from their personal experience, instead of picking them up from poetry or literature. This makes their message more personalised, displays authenticity, vulnerability and helps them form a powerful connection with the audience. A company spokesperson who is ready with his metaphors can speak or communicate with great impact for internal, external and policy communication. Quoting Aristotle from his work ‘Poetics’, “The greatest thing by far is to be master of metaphor. It is one thing that cannot be learnt from others; and it is also a sign of genius”.

Lastly, metaphors can help create communication that American aviator and author, Anne Morrow Lindbergh describes as, “Good communication is as stimulating as black coffee, and just as hard to sleep after”.

Will niche PR firms drive the next phase of M&As?