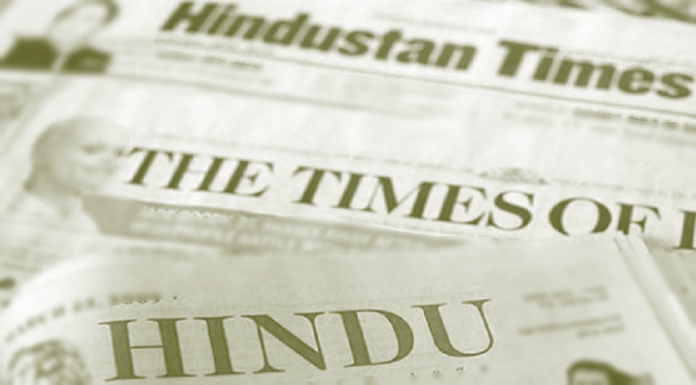 My romance with print journalism began in the age when there was no Internet and TV meant a black and white look at the state-owned Doordarshan channel. My career began in The Times of India newsroom in Mumbai and the heady feel there included the chatter of noisy teleprinters, the whirring sounds of huge presses and mind-that-ink moments in making pages near lino-type machines.

So, I am glad to see that print is being seen in a better light again as leading Indian newspaper brands, including The Hindu, The Times of India and Hindustan Times launch a campaign to show the glory of the print medium.

You could cynically call it the ‘mahagatbandhan’ (grand alliance) of old-world brands against the digital onslaught, somewhat like opposition parties uniting to fight the BJP under Prime Minister Narendra Modi.

However, we need to look at the pros and cons. The print brands have a point, thanks to three factors.

Fake News: The rise of fake news has meant newsroom processes are important again. Fact-checking, cross-verification, sourcing and responsible use of language have been important for mainstream journalists, even in news brands known for biases and/or lethargy or incompetence.

Low-Cost Syndrome: Digital media dramatically lower entry costs for newbies. While that is great for those who want to go the entrepreneurial way to disrupt old brands, the flip side is the entry of social media and fake news sites and pure propagandist brands. The only way good journalism can rise above is by practicing good old-fashioned journalism.

Look, Touch and Feel: The fact is that just as advertisements that feature models in white coats playing doctors can sell a toothpaste better, the sheer “touch and feel” of print gives an old-fashioned comfort factor to make news more reliable. Print brands say readers pay more attention to print ads. I do believe the touchy-feely look makes the difference.

Let us look at the other side where print tends to be weak.

Digital Variety: Digital media has greater scope for variety – in the choice of subjects, style of presentation and the degree of interactivity. There is a natural richness.

Convergence is Rich: You can now embed a podcast, a video and a poll within an HTML page with text news. New digital media start-ups like Quint are leading the charge.

Personal Touch: News blogs connect the dots between old-world columnists and reporters in a new-age format where bloggers within established digital brands mix analysis with news and some opinion. This has its own credibility based on clarity of communication and the smart use of language. Brands like Forbes.com do this effectively.

Old newspaper brands are yet to catch up on the new-age style of presentation and packaging, though they are trying. Also, many (and I mean many) newspaper brands are citing old-world print virtues but their websites and internal news processes are still mired in the pre-digital era, barring one or two exceptions. They need to do better than that so that they can add digital value to print credibility.

Last but not least, I write for Firstpost.com which has now launched a print edition. I was delighted to write for the print edition after years of being on its website and app. Digital brands can go print in the new era with their own styles and business models.

Old is not necessarily gold unless traditional news brands reinvent themselves to serve new-age customers in new styles and ways. There is a difference between resting on your laurels and reinventing yourself.

Future of print media in India

Be the first to comment on "Newspaper brands hit back, aided by fake news opportunity – but still have a long way to go"