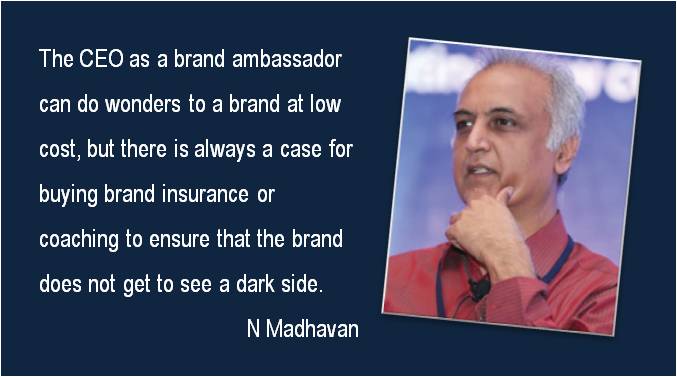 It is quite amusing to watch Tamil TV channels these days. Not one or two, but several companies/brands have chosen to bring on the CEO/owner of the companies concerned to appear in their commercials. From electronics retailer Vasanth & Co (which runs a whole TV channel by the name) to Lalithaa Jewellery to Aachi Masala (spices) to Saravana Stores, the list is long.

I am not always sure if these CEOs are branding themselves or their companies or products. It is clear that when you are a rich business owner and those around you do not quite recognise you, it pays to shell out some of your advertising money to get an upwardly social kick. But then, H. Vasanthakumar (also a Congress party leader) and the bald, smiling Kiran Kumar (who owns Lalithaa Jewellery) go that extra mile to reassure consumers of their value. The Lalithaa Jewellery website has an entire page dedicated to its managing director who is quoted as saying: “The day I sold my mother’s meagre bangles to start business seems like yesterday. The financially tough times I faced as a kid has indeed taught me the value of every penny.” Vasanth promises all leading global brands under one roof at low prices. The Aachi boss assures of quality raw material bought in charming rural environs.

Now, that brings me to Richard Branson and Vijay Mallya – and possibly, Elon Musk of Tesla and Jeff Bezos of Amazon.

Branson’s adventurous personality matches the innovations his Virgin group has done in aviation and music. Musk and Bezos are both involved in companies that are sending rockets to space and their technological edge gives an enhanced reputation to their products – such as Tesla electric cars or Amazon’s digital assistant Echo.

Mallya has been a beer/liquor baron whose personal adventures as an airline owner (with the same Kingfisher brand as his beer), swimsuit calendar promoter and racehorse owner did rub off on his liquor products that cannot officially be advertised explicitly in India. You could call Mallya’s flamboyant ways a clever and low-cost, high-impact case of proxy branding.

But we all know what happened to Kingfisher Airlines, which went bust, and the way United Spirits has been sold off to multinational giant Diageo’s control and how Mallya is grabbing the headlines for the wrong reasons as he evades Indian law enforcers in London after facing accusations of money laundering and huge loan defaults.

Clearly, CEO/owner-based branding can be a double-edged sword if the person in question is found wanting or lacking in proper association with the brand.

Last year, software giant Infosys saw a bitter boardroom power struggle in which co-founder N.R. Narayana Murthy fired salvos at then CEO Vishal Sikka. While Sikka has quit, some of the criticism Murthy faced as an austere co-founder has a double-edged quality. While social commentators may laud and applaud Murthy, what does it mean to Infosys as an employer brand? Will ambitious talent at the CXO level avoid the company fearing board-level carping?

CEOs, owners, and founders can leave their impact on the companies and products they build or nurture but these brands constantly face negative fallouts if there is a backlash. Those who nurture brands need to bear this in mind. The CEO as a brand ambassador can do wonders at low cost to a brand, but there is always a case for buying brand insurance or coaching to ensure that the brand does not get to see a dark side.

As for Saravana Stores, founder Selvarathnam’s son Saravana Arul was in the news last year when his daughter got married and sported a wedding reception gown made of gold — said to cost Rs 13 crore. And you just have to view him serenading Hansika Motwani in a video ad to appreciate his bold ways.

Now, whether the wedding gown and ad worked or not for his company, I do not know. But it sure made Arul famous in a state where only movie stars get to do what he did.

Be the first to comment on "Owners & CEOs make great brand ambassadors, but they are double-edged swords"

The Leadership Journey – Part One