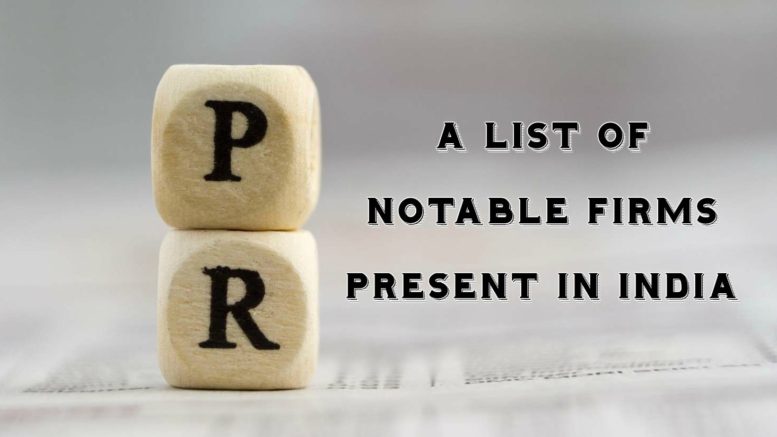 There are two lists one refers to in order to get an idea of the notable Public Relation firms present in India. There are two types of firms based on ownership. First, those that are international and most of them feature in the Top 30 in the Holmes Report list. These include the following – Edelman, Weber Shandwick, Fleishman, Ketchum Sampark, MSLGROUP, Genesis BM, H+K Strategies, Ogilvy PR, Golinopinion, Brunswick, Cohn & Wolfe Six Degrees, FTI Consulting, APCO Worldwide, WE Communications, Ruder Finn, Text 100, Zeno Group, Lewis and Dentsu through Perfect Relations. These are about 19 firms out of which 14 are PRCAI members, just for the record.

The second source for a list is the PRCAI website where member firms are listed and the Top 10 among the Indian headquartered firms are Adfactors (which is in a different league), Avian Media, Value 360, The PRactice, PR Pundit, Integral, Aim High Consulting and Madison. Golinopinion and Astrum would be in this list but are not PRCAI members.

Then there are numerous smaller firms that are raring to go, of which some are waiting to be folded into larger firms. A dozen among them I will list down in a subsequent paragraph. This column highlights a dozen firms in the Top 25 that do not have a direct India presence including Blue Focus from China, Havas from France, W20 Group from the US, MC Group from Germany, Sunny Side Up from Japan, Porter Novelli which has an affiliation but no other presence, Huntsworth Health, Finsbury, Vector Inc and Inventiv Health which means they would look at being part of an exciting market through an acquisition or through starting out on their own like four others did in the last decade and have not made the kind of inroads that the firms have made who entered the inorganic way.

Ruderfinn, WE Communications, APCO Worldwide and Fleishman entered in the last decade on their own and have remained largely boutique. Text 100 is the only firm that came in on its own and has been among the Top 10 firms. It started here in the mid-90s and has been consistent. Compared to those that set-up shop on their own, firms such as Burson Marsteller, MSLGROUP, Edelman, Weber Shandwick, Ketchum and Cohn & Wolfe which entered through acquisitions have grown rapidly.

There is a wave of firms ranging from Gutenberg, Media Mantra, Kaizzen, Boring Brands, Fuzion, Wordswork, First Partners, Quikrelations, Candour, Simulations, Astrum, Pitchfork Partners, Skateboard and PR Hub among others that are in the sub $2million range.

All this brings me to the point that I like reminding myself that the Top 5 firms together have a turnover of INR 450 crore. The next five are at about INR 100 crore. The next 10 at about INR 150 crore. These comprise 60% of the organised PR consulting business. The next 30 firms are in the INR 6 to 9 crore range followed by another 50+ firms in the INR 3 to 6 crore range. This is in comparison with the advertising business in India which is worth INR 63,000 crore or $100 million. Another way to look at it is that the entire PR consulting business in India is smaller than the total revenue of the Top 2 firms globally. These figures are to put a perspective and let existing firms know that there is a lot more potential in the second-tier companies and second-tier cities waiting to be tapped.

At a loss for words