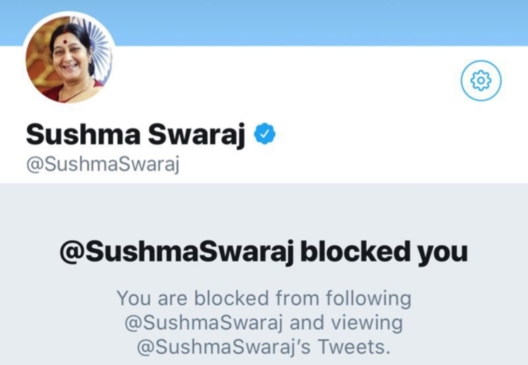 India’s Minister of External Affairs – Sushma Swaraj has been known to be more active on social media than most of her peers – women politicians, members of the union cabinet or senior political leaders. Since she took this office in 2014, she has used social media to help extend the services of her office (and the efficiency of their delivery) remarkably. Her Twitter Activism has been exemplary and she has been called the Queen of Twitter and Supermom of State for the same.

The last week or so has not been easy however. What could have been considered an archetypal issue, arguably prolonged further than it should have (or has in the past). A milestone of this issue had been when she blocked people from her twitter account. The latest instance blocking of a critic being widely hailed as a boss moment.

It’s a classic (relatively speaking) trade-off of social media, for political and corporate brands. On one hand it creates access to larger number of people than conventional means. On the other there is abuse of this easy access and that of free speech. The abuse that public figures face can be incredibly foul. By virtue of being one, a large part of their professional and personal lives are in public domain, and therefore an easy target for “trolls”. The very ease of access, freeness of the speech, and sometimes anonymity, that fuel the size of access that social media provides also fuel to the foulness that these public figures face.

Politicians are no different. The abuse that Swaraj has faced in general and in the last few days in particular is no different. It is also important to note that the abuse to which she has been subjected should be condemned, whether or not one agrees to what the victim of that abuse has done.

“(They are) the sadistic ne’er-do-wells of the digital realm, the misanthropic misfits of information age. Unlike a normal person, when a troll enters an online discussion, he is not seeking truth or clarification. All he wants to do is inflict pain, ridicule, and humiliation on a targeted person.”

This definition is, in my opinion, one of the best as it carefully separates a (possibly rude) dissenter but one with a genuine concern and an expectation for it to be resolved, from aimless folks who don’t really have an ask.

So the question is – Should politicians block people on Social Media?

One way to approach an answer to this question is to extrapolate the right thing to do in a pre-social media era. When a private citizen becomes a public official, the behaviour expected from them changes. For example, when nominating themselves for public offices, candidates must disclose their assets and liabilities, which wouldn’t be expected of a private citizen. Once elected, public officials are responsible to the citizens. Their responsibilities and citizens’ expectations from them increase once they hold that office. They can’t for instance, disallow an elector from participating in a town-hall. It is their right to debate, question and dissent.

And the same statutes that provide these “rights” also guide the manner in which these rights should be exercised. In the case of townhalls, a participant cannot overstep a boundary of socially, culturally and legally accepted norms, without being excluded. That is the safeguard that is possible in an easier way in physical platforms. In the world of social media this safeguard is provided by an intermediary of the platforms that set the rules and decide how they’re implemented.

On Twitter, for example, accounts that overstep these boundaries can be reported for abuse. And if the community at large highlight this issue, Twitter guidelines are applied to it and can subsequently limit the activity or in adverse cases suspend the account. This safeguard is far from foolproof and does get abused as well (just like the law). But in the absence of anything better, these are the tools that are available to all users and must be used judicially. Essentially as a private citizen you are entitled to your rights but as a public servant, you are responsible, for better or for worse, for every citzen, even those who dissent.

The question has been tackled in the United States since Donald Trump took over the presidency, who habitually blocked people with whom he disagreed. A federal court judged a similar matter on similar lines, stating this act of blocking people “tramples upon a person’s right to present dissenting opinions without fear of prosecution”, something that could eventually have a bearing on Donald Trump’s right to block people as well.

Hence the question – Should a politician continue to endure harassment and abuse to fulfil their duty?

Clearly the answer is no. Particularly in the case of Swaraj – What could have been done to handle the situation differently? We explore some approaches to this in our subsequent post to State Craft.

Road to the World’s Largest Elections