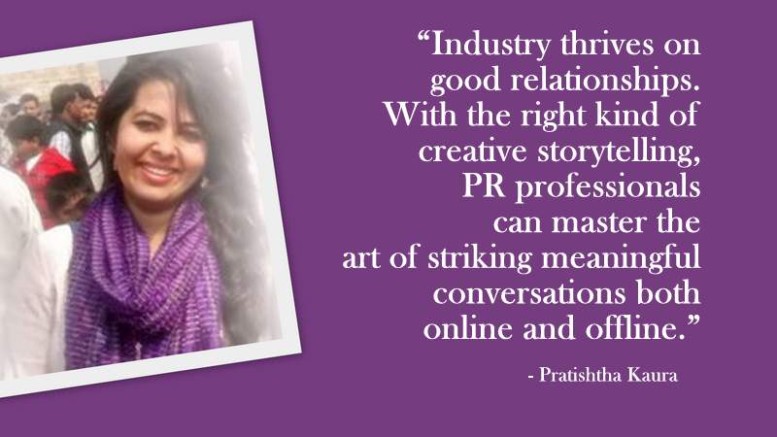 These statistics certainly depict that digital is the keyword today. While brands are now considering the use of digital platforms to reach their target audiences directly, with trends such as crowdsourcing and citizen journalism, it is very easy for anyone to build a blog, broadcast a video on YouTube or create a Facebook or Twitter profile and express his or herself. Although broadly the function of a PR pro has been to secure media coverage for the clients, the rise of social media has put the freedom of expression in the hands of anyone and everyone who exists on the social media.

We all know that there is much more to public relations than only media relations, it’s more about handling the organization’s reputation with the relevant stakeholders and media remains one of those. And media relations is not an easy task. The digital campaigns are easier to execute once the person learns the relevant skills, however, developing good media relations involves time and depends on convincing the journalists and having good relationships with the media for the story pitch to result in the desired outcome.

Therefore, in the age of digital marketing, media relations have certainly changed and evolved. PR pros can easily track the whereabouts of the journalists through their Twitter and Facebook accounts and get to know what they are talking about. Additionally, the digital age has given the PR professionals some new tools to manage the clients’ reputation. The age old press release, relevant even today is now being experimented with its format. The video press release and infographics are becoming the new trend which some new age clients are experimenting with.

With the rise of independent news media portals both Indian and international and that too by senior members of the journalistic fraternity, media relations becomes even more pertinent. They form an important set of influencers with whom brands need to converse on regular basis. With the bloggers, instagrammers and video content producers, the media landscape further expands that PR pros need to tap for their clients. Moreover, the print media is not dying anytime soon in India. Especially, with the growing vernacular media to reach the mass markets, media relations will remain an integral part of the PR campaigns. The earned media will always remain more credible than the owned media.

We, as PR professionals must not forget that it is not only us who are facing the pressures of the digital world. There is an increase in pressure on the journalists as well. Recently, a policy implemented at the Times Group made it compulsory for the journalists to break the stories on Twitter.

Coming back to the question, will media relations diminish with the evolving digital age of communications, the answer is definitely a no. Media relations are definitely going to be a part of the communication campaigns and it will remain as hard as it had been to develop good media relations. With strong media relations, the brands are definitely going to benefit since the journalist will inform them when they are doing some specific story on their organization or the sector as a whole. The fact to be reinstated here is that we must not forget that media relations doesn’t only mean pitching to the media and getting the coverage. The entire industry thrives on good relationships. With the right kind of creative storytelling, PR professionals can certainly master the art of striking meaningful conversations both online and offline!

The changing face of news – From live telecast to live stream

Be the first to comment on "With digital audiences increasing, is the media relations dead?"