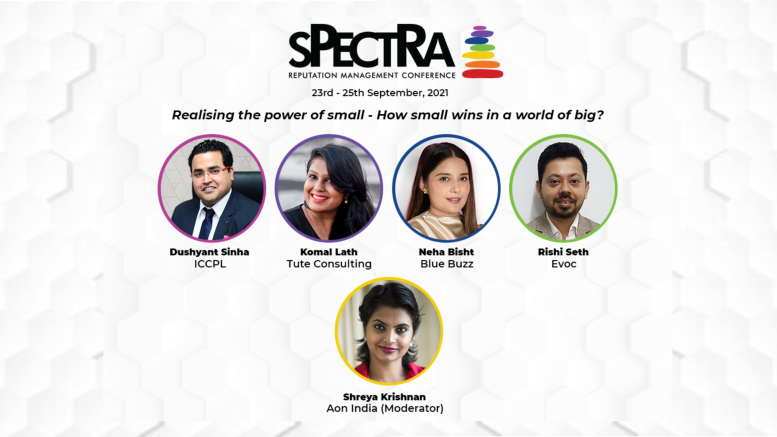 The power of small is often undermined and we’re taught there’s power to largeness, observed Shreya Krishnan, Aon India as she kicked off the discussion on “Realising the power of small – How small wins in a world of big?” The panelists were – Dushyant Sinha, ICCPL, Komal Lath, Tute Consulting, Neha Bisht, Blue Buzz and Rishi Seth, Evoc.

For most of us, small wins go unnoticed, as the largeness of things overpower us. But what is important is that we need to step back and realise that small wins give us joy and motivate us too. This is relevant in the smaller firms, who celebrate small wins that leads to increased satisfaction, which can steer you to growth and success. We caught a glimpse of this as the panelists juggled their experiences, backed by the common, strong belief in everything that is ‘small’.

Do most people judge by size? But ‘small’ truly packs the puch, said Shreya. How was it being empowered by small? “Thinking of small, I remember the analogy of salt, which is the smallest particle and how every recipe is incomplete without it,” commented Neha and added – there is no small, only a perception; and she recalled how she met a 16 year old who had developed a drone, all alone! Agreeing with Neha, Dushyant questioned – are we being called small, because we are small in size or because of the number of employees? Every ‘big’ started ‘small’.

The best innovations have come from start-ups and younger firms, felt Rishi and went on to say that just because of their DNA is built up of a challenger’s mindset, they want to disrupt businesses and, that is as much true as it is for Evoc; and he narrated how they solved their client Oyo’s problem through an insight that they had detected. Anyone who said “bade hai to behetar hai” needs to rethink, advised Komal, and revealed they got a huge opportunity  to go digital and they were almost the first to start influencer marketing and “today we are the power of influencers”.

The true advantage of starting a small business

It’s critical to be agile and the nimble-footedness of being small is beautiful, shared Komal and added that clients are our partners, so pick your partners well. Learning from mistakes of other big firms, so that new ideas could be implemented was something Dushyant did; and as they advanced steadily along the journey, they were the first to start a research team in-house and recently started a Media Mapping Research centre. In a big world there’s a small you, creating waves – was Neha’s comment.

What no one tells you is that you have to don so many hats – like you have to handle finances, business development and just about everything, Neha shared; it was challenging, but it was a great learning curve. Having  a close-knit team one of the biggest advantages, Rishi disclosed; plus they were far more disposed to taking risks, starting new innovations and moreover, the speed of decision-making was lightning fast; personally, he  was far more pushy and aggressive in selling innovative ideas and clients appreciated that a lot. That’s the biggest power of small, he detailed as against larger firms and, the only thing he could have improved was to get senior people who had the desire to “hustle” through. With a belief all along that he could take the bull by the horns, Dushyant felt that having the right resource is still a bit of a challenge.

The power-of-small moment was ‘ideation’ for Dushyant, who said we are free to ideate and come out with new innovations, while Rishi thought it was the absolute focus and personalised service that only a small firm can give. For Komal it was when a client said – I will wait to become a certain size, so I can have you on board!

Finally the tips from Neha were just apt – Stand your ground, no matter what; and keep going, for there will be multiple hurdles along the way.

Be the first to comment on "SPECTRA Plus 2021: Realising the power of small – How small wins in a world of big?"

Are you doing what you want