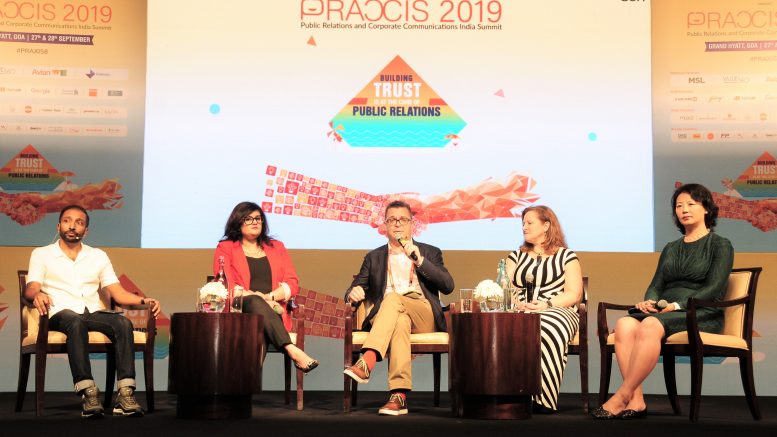 What is the power of storytelling? How can it create trust? A story can have an impact when we read or hear a story and actually feel the experience; that’s when we align our minds to the story; that’s where a ‘connect’ syncs into place. By telling a story and connecting with the reader, a storyteller can actually generate ‘trust’. But at the same time, when there is a breach of trust, it can ring in a ‘disconnect’.

Arun Sudhaman, CEO and editor-in-chief at the Holmes Report who was moderating the panel discussion with communication leaders, suggested to keep it live and vibrant, while focusing on pressure points when it comes to stories of trust in Asia. They would look at issues that turned up, and how to rebuilt trust.

What are the lessons found here? Lee Nugent, EVP & Regional Director APAC at Archetype referred to the lesson that was loud and clear, in the fantastic job done by Mondelez and Cadbury’s when The Ministry of Health in Malaysia found traces of pig DNA in Cadbury’s and two products were recalled. This had Muslim consumers very upset and had them almost staging a boycott. The way the company dealt with the problem, actually displayed a clear “understanding of the importance of religious influence. The team had to react fast and convince the global HQ too. Finally they were successful, and used traditional channels to reach the audience and create maximum impact.

Another story, which shattered trust surfaced next. Priyanka Tanwar, Head of Public Affairs for LIXIL Asia Pacific reacted to the Cambridge Analytica film – saying that “The real game changer was Cambridge Analytica,” where the whistle-blower actually revealed the circumstances. Finally, Mark Zuckerberg was quick to apologise for the “breach of trust”, saying: “I’m really sorry that this happened. I started Facebook and take full responsibility”. Priyanka pointed out “there was a huge opportunity here for us communicators to build trust in the digital era!” We communicators need to talk to a range of stakeholders which range from regulators, to governments and even employees; for “remember the Cambridge Analytica happened because of a whistle-blower, who was an employee”. Consumers and employees want to do business with an organization which has got a purpose and a future.

Talking about the biggest challenges that exist when it comes to erosion of trust, Elan Shou – Regional Director, EVP – Ruder Finn emphasised the fact that “contradictions can be exposed easily today, and it is a sensitive society with cultural differences in Asia Pacific, which we must respect”. We are also beginning to see polarised opinions today. What she could perceive across Asia Pacific, was that the government’s involvement is getting stronger. This is when change happens, she said.

When asked about the ‘distrust’ challenge that companies are facing, Johna Burke – Global Managing Director, AMEC said that “The biggest challenge is the lack of information”. Understanding the DNA of what their market looks like is important. Socially it’s the absence of civil discourse that puts so much pressure on brands, she explained – “everyone has to take a stand because of thought shaming; understanding and clearly communicating is one of the biggest barriers that brands face”.

Today, a major concern is fake or misleading news that can spread like wildfire on social media. Arun touched upon the challenges around information and fake news, asking whether there can be a solution at all. Lee thought that at the moment we are not seeing a huge amount of impact affecting corporates. “But we are absolutely ready for it,” he said on a positive note. Referring to a fake news law in Singapore, he highlighted that it was “highly controversial” and that trust is a challenge for all of us.

But is a law really needed? Priyanka felt it was definitely needed. WhatsApp actually took a lot of measures before the Indian Elections for fake news. But with ‘fake’ news you cannot figure out what is fake or real. There are huge databases of people in China (800 million) and in India (500 million). Not sure if any law is the right answer, she said that CEOs need to step up and take a serious view of their responsibility.

When it comes to building trust at a local level, how do you persuade global brands that they need to hear local voices? Lee felt that sadly, listening happens only when something goes wrong! “The biggest currency value of trust is in the communication,” concluded Priyanka.

Career decisions in Goa…where else?