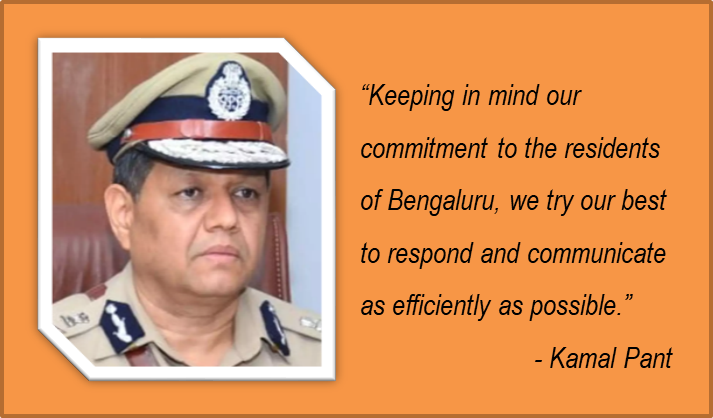 According to the National Crime Records Bureau (NCRB), Bengaluru ranks third after Delhi and Mumbai in its crime rate. Bengaluru’s top cop Kamal Pant IPS confidently resonates that efforts are taken to streamline certain focus areas and ensure all is in control.

What are some of the initiatives that you have spearheaded ever since you took charge in August 2020?

Being the epicentre of technology, a cosmopolitan city for expats and a welcoming environment for businesses to flourish, recent initiatives that we have introduced all centered around close interactions with our citizens who now have a platform to air their concerns, share suggestions and work hand in hand with the police to ensure that a safe and secure environment prevails.

What is the feedback you have received as part of the Open Communications Campaign?

A majority of the respondents had grievances about the police interactions that were quite similar in nature. Some comments included that our personnel were not very forthcoming when our citizens visited them at the police station. Unavailability of our police at the police station due to other pressing commitments, not dealing with the complainants professionally, long waiting periods and leaving complaints unresolved were some of the issues noted when we did an internal research. We now have one day of the month dedicated to listening to our citizens and taking immediate action wherever possible.

You have recently introduced the monthly Outreach Programme. How effective is it?

Moving forward, the fourth Saturday of the month is dedicated to meeting our citizens and taking charge to ensure we set the system right. We make sure that our officers’ right from the level of Inspector to the Commissioner are now available at the Police Station at a designated day and time. The names and details of the roster are communicated well in advance ensuring that our citizens are comfortable in reaching out to our team.

Online communication especially through Twitter has taken centre stage for residents to address grievances. What is the public response to this platform?

With an active presence on social media such as Twitter, our citizens can now report on any instance that they face; be it misbehaviour, misconduct and our local police officers will swing into action. We have also introduced an outreach programme on Twitter and have received an overwhelming response from the residents.

What steps have you taken towards the safety of Women and Children across Bengaluru?

Woman and children centric policing is the need of the hour. Two women counsellors have been deputed at the police station who will address the concerns of women and children. These women counsellors are available through the day to lend a listening ear to the grievances of the women and children who approach our stations. These designated counsellors; all who are graduates with a background in psychology and social work have been recruited on a contract basis. We have already implemented this in 54 police stations across the city and will soon extend it to 110 stations in the coming month.

Taking into consideration the large majority of women IT professionals and garment workers in the city of Bengaluru, it is important to ensure a safe haven at all times. Furthermore, our team is closely working on the Nirbhaya Security Scheme along with the Central Government.

What are some of the challenges that our city is currently facing?

Cybercrime remains a problematic area for both the citizens and the police. However, we have devised a mechanism to free the city from this menace. The golden hour is our window where the public and the police can work together to register the complaint and for the police to take immediate action. We urge the public to call us via 100 or online and we will flag a fraudulent transaction, stop the money transfer and prevent the loss.

Last month, the new platform received over 20 complaints and the team were able to take action and prevent the transfer. In a months’ time we plan to streamline this, it will save people from anxiety, harassment and loss of money.

What steps are you taking to wage a war on the prevailing drug menace?

The Drug Menace is another area of concern and recently an unprecedented quantity of drugs were ceased by our team. The drug peddlers allegedly procure the narcotic from the dark net. Sources from western countries or other clandestine routes, the drug peddlers use technology to send data encrypted messages to browse the dark web and purchase drugs online using bitcoins. The biggest challenge we face is when these drugs are sold to college students and technology industry professionals and we try to avoid such precarious situations. Constant raids are being conducted across the city especially when we get tip offs from the Customs department. The drug peddlers are charged under various sections of the NDPS Act. Our team is taking massive action against drug peddling and distribution.

How can the public support you in your current plans?

I must admit that the lack of public understanding of our roles and responsibilities sometimes creates a wave of frustration for our workforce. Often, we notice that most of the grievances are out of our domain.

For example: The road designing and upgradation works – citizens approach us for an immediate resolve when they are unable to remove their vehicles etc. and that’s when we try our best to make them understand what falls in our jurisdiction and what does not. Moreover, public expectations are high in terms of responding and solving grievances immediately.

Keeping in mind our commitment to the residents of Bengaluru, we try our best to respond as efficiently as possible. After all, it is our duty to ensure the safety and security of the public. We have to maintain the law, order and peace in society.

The citizens have been cooperative and we always look forward to their support. After all, when we are honest in our intentions, they also understand and accommodate our limitations and difficulties. When our intent is clear, they cooperate. 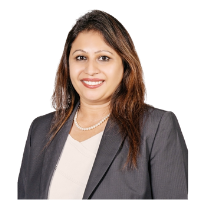 Sameera Fernandes is the Director of Ecosol Global and Chairperson of External Affairs - Bangalore Chamber of Industry and Commerce (BCIC). She is also the former Director – Strategy, St. Francis College, Bengaluru.

She was conferred with the Nirbhaya Award and also the ‘Woman of Influence’ Award by Archbishop Dr. Peter Machado.

Her past stints include Sun Microsystems, Nokia (UAE), Jet Airways, Al Ghurair Investments (UAE) and has been a regular contributor to the Friday Magazine of Gulf News.
SHARE TWEET PIN SHARE

Be the first to comment on "Straight Talk with Kamal Pant"