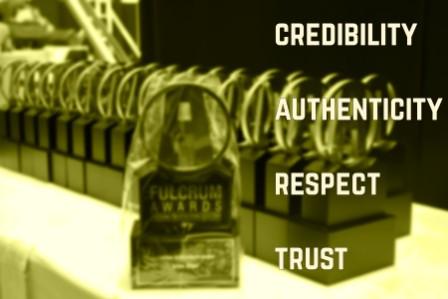 At the first PRAXIS in Pondicherry, couple of senior practitioners asked me why I had not included an Awards in the weekend conference mix.  My response was that an Awards programme should be launched only when there is a need to do and it should be robust and credible at the same time. I was reminded at subsequent editions of PRAXIS but I was reluctant until I had thought it through, had the right partners in place and more importantly the ability to outsource the due diligence and process audit to a Big 4 firm. When the Fulcrum Awards were introduced last year we started on a high with close to 400 entries from over 70 organisations. We had two solid partners and the backing of the PRAXIS venue and audience. It was an experiment that had gone right.

We did some things that no other Awards had done before. We used award entry fees to fund the Awards night. We did not bank on participants to sponsor. We did not allow jury members to send entries from their organisations and we ensured utmost levels of transparency. At the end of the jury meet the winners list was sealed and retained with the jury chair and the awards director with no scope for tampering. What the jury finalised at the jury meet was what was announced on the awards night.

I say this because I have heard genuine stories from various parts of the world where there is a slip between the cup and the lip. And these happen for whatever reason. But a jury is there to make a verdict and no one, least of all the promoters or organisers should not interfere or be on the jury except as attendants and observers. So, this year, The PRomise Foundation takes majority ownership of the awards and continues to partner with PR Moment India. But the biggest deal here is that we have invested considerable amount of money to continue with two practices from the inaugural year – to have an independent Awards Director and a fairly large jury. The jury does this service for free and all they get is an invitation to the Awards night. And to introduce a new practice which maybe the first time a communications awards is witnessing – Bringing an audit firm to manage the process audit, the due diligence and support as an additional knowledge partner.

You will hear more of that later in the week when the second edition is announced. But to my mind this is a bold step in every way. It will not only enhance the credibility of the Awards programme but also urge others across India and the world to do the same. We want to be the first and best in all that we do. This is a step in that direction. We are sure the Fulcrum Awards will carry more weight now on and the winners will take pride in carrying the trophy home – more than ever before. We would love to hear from you on what else we must to do to make this your most trusted and respected awards programme.

Because an Award is only as good as the trust and respect reposed in it by the participants. Credibility and Authenticity will come from there.

Be the first to comment on "Taking Pride in the Awards CART of Credibility, Authenticity, Respect and Trust"

Does being an expert have limitations?

How much is the Regional PR pie in India worth ?