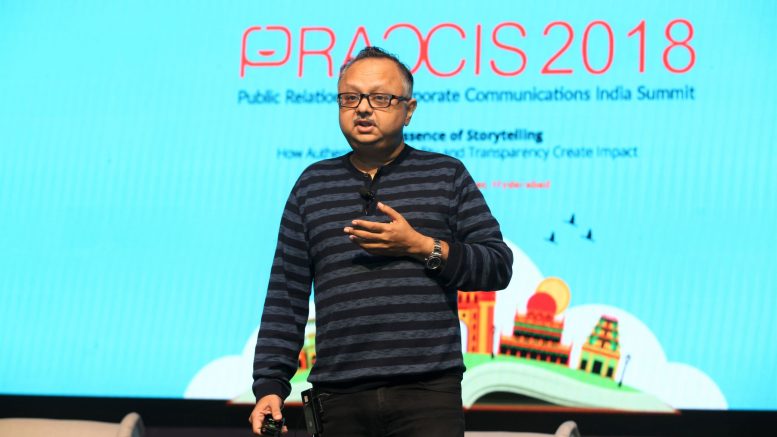 “You tell better stories … when you can measure the impact they make!” was how Partho Dasgupta, CEO, BARC India kicked off his Special Address on Building Brands and Storytelling: Understanding the Power of Television. With BARC India managing an accurate and inclusive TV audience measurement system, his talk was fully geared towards proving the influence of TV.

“It’s all about reaching the masses – the power of TV. How TV works and how to create an impact with TV,” he elaborated. Evidence was clear as he cited examples of the Lady Gaga last act on TV, which reached out to 8,42,000 people, and singer Anup Jalota’s programme that had reached out to 15,000,000 people in 15 minutes. And 1.5 million assembled (so-called ‘inflated’ estimates!) at Donald Trump’s in the swearing-in ceremony. The “wink and the hug” video of Rahul Gandhi-PM Modi was watched by 14 million people. The movie Sultan was watched by 33 million in theatres, and the World Television Premiere was viewed by 53 million. “Anything that comes on TV gets amplified!” he pointed out. The impact of TV today is massive and there is enough proof!

TV outreach is much larger than print and social media. 250 million is the total daily newspaper readership. Active social media users are at 173 million and there are 613 million daily TV tune-ins. So, can you outmatch this?

And, do we know about the reach of Hindi GEC daily, which 300 million watch everyday? Nagin 3 is watched by 32 million and Hindi news is watched by 65 million on primetime. 8 million viewers watched PM Modi’s interview on 22 channels. 8 million watched PM Modi’s swearing in; and 60 million in Tamil Nadu watched the funeral of the DMK leader Karunanidhi. When the former Tamil Nadu Chief Minister Jayalalitha passed away, 780 millions watched. World Television premiere of Bahubali was watched by 43 million viewers. The 2018 Independence Day speech of PM Modi had 123 million viewers. Today 836 million have access to TV in India, which is 2/3 of the population. 613 million watch TV everyday, spending 20% of their time.

TV is big to take your story to more and more people. And it should be a big part of storytelling, he stated. TV is where brands make stories. Social media can get you viral, but it is TV that makes you a household name! He recalled the time when the “Dancing Uncle” video suddenly emerged and when he made an appearance in big TV serials, it was seen that there was a 30% spike for that particular programme. Then take the case of the popular TV actress Mouni Roy – Nagin made her a brand name, and today she has crossed over to Bollywood.

So, the TV landscape is evolving. Penetration is 66% and 100 million have yet to get TV. India has 300 odd million homes and 197 million have TV. This will only grow, he said. 98% of India is single TV market, and they watch as a family, as Indians love watching TV together! “In the regional languages – Gujarati, Assamese, Marathi, Oriya, Kannada etc – there is huge growth, which is going through the roof!”

Then he looked at some myths and dismissed them. The first myth was – video consumption is all about YouTube, but the glaring fact was that 245 million viewers are reached in one month by a single TV channel. TV is declining? No, it’s actually only growing – the number of people reached and time spent; in fact, in US, the average time spent is 4 hours 30 minutes, while in India it is 3 hours 48 minutes. The myth that youth is no longer watching TV, was dispelled by the revelation that one thirds of urban viewers come from the youth, even in urban areas; and 30% from the urban market is a large number.

News viewership has significantly grown, and news on TV continues to resonate with the ‘youth’. Be it election news or sudden events, ‘youth’ continues to consume news on TV. Across all major news stories, ‘youth’ viewership has grown. “The average has increased tremendously. Take any event – Independence Day celebrations, Atal Vajpayee’s death, Ram Rahim scam – all saw viewership going up, and that too, youth viewership!”

News is only consumed in the digital, was another myth. TV empowers you to do ‘granular analysis’. We can give you the numbers for the ‘Hug and wink’ act. There were 8 million views in English/Hindi channels,” he projected.

There is full accountable measurability in TV. There are no guesstimates involved. The figures are readily available. TV gives measurable impact of campaign planning. The power of Ad effectiveness on TV is visible as big digital players come to television for promotion! For Netflix, TV is a promotion platform for its new launches like ‘Sacred Games’ and ‘Ghoul’. Amazon Ad insertions increase during the Annual sale, and despite having digital platform ‘Amazon Prime Video’, TV is its destination for promotion. Even Flipkart Ad insertions increase during the Annual sale.

BARC data tracks all major events. The impact of Government’s ‘cooking gas campaign’ has been accurately reflected. The Government’s sustained campaign on TV (for the last three years), promoting adoption of cleaner cooking fuel has been tracked. Regarding states with maximum growth of homes with LPG/PNG, it was Odhisa that topped the list with had 119%, followed by Bihar/Jharkhand (110%), West Bengal (60%),  Madhya Pradesh/Chattisgarh (58%),  UP/Uttarakhand (42%) and Rajasthan (36%). In 2016-18 Pradhan Mantri Ujjwala Yojana ads were run on Hindi, Bhojpuri, Oriya, Assamese and Bangla channels. So, the impact of the TV campaign on ground was very evident. Among all regional language channels, the impact of the Swachh Bharat campaign was big with the ads aired on TV –  27% on Hindi language channels, 19% on Telugu channels, and 7% on Assamese channels. Swachh Bharat fared well, but the recent Kerala floods were seen only on Malayalam channels, and were poorly executed as only Kerala saw it, he felt.

TV gives measurable impact in campaign planning, he said sharing details of Top Ten Brands in August 2018. So, brands achieved a lot  – 754 million were reached by Colgate Palmolive, Unilver reached 616  million people and so on.

Finally, talking about the role of PR and Marketing in building brands, he commented that our PM uses PR as a tremendous tool – consider his speech at Wembley, Demonetisation, GST launch – all were very effective. Again, “Jio used PR effectively when it launched; this was a good example of how PR can use TV to market a brand,” he said.

Recognise the power of TV, and use it the way you want, was his advice. The strong analysis, the precise use of granular data – this is what powers TV, he concluded.

In Conversation with Tushar Makkar