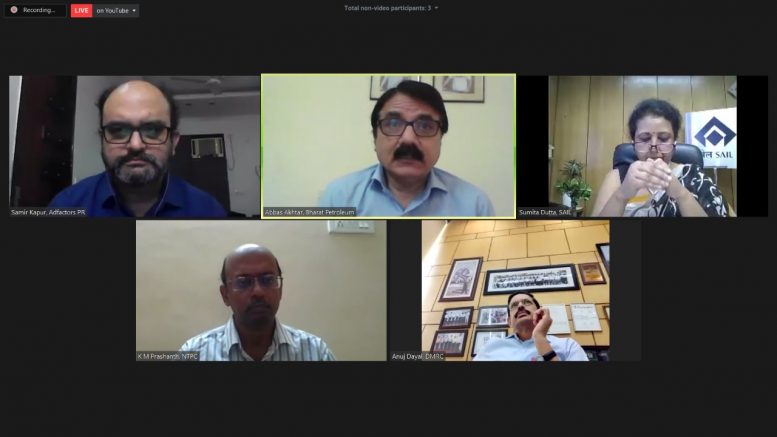 The COVID-19 era, that has taken the world unawares, has impacted communications and work patterns of PSUs. We read about the government advising companies to implement ‘Work from Home’ policy and to encourage “social distancing”. At this time of crisis, we note that PSUs have been extremely cautious about communication to ensure that facts reach their stakeholders.

Navigating reputation in post-COVID era, the discussion at The Communicators’ Assembly Point: 4, focused on communication by PSUs. PSUs have been the builders of modern India, and even before the coronavirus outbreak, they have faced the survival battle; so, now it is very possible that they will emerge as winners, observed Dr Samir Kapur, Director, Adfactors PR as he interacted with the participants, who were all PSU CorpComm stalwarts. The participants were – Sumita Dutta, Executive Director (Corporate Affairs), Steel Authority of India Limited (SAIL), Anuj Dayal, Executive Director, Corporate Communications, Delhi Metro Rail Corporation (DMRC), Abbas Akhtar, General Manager (Brand & PR) at Bharat Petroleum Corporation Limited (BPCL) and K M Prashanth, Additional General Manager, Corporate Communications, NTPC.

On a positive note, Sumita expressed the fact that “challenges open up opportunities, new possibilities and innovative thinking”. But, the biggest shift for SAIL was – to go virtual. They got re-calibrated and she pointed out that they had to stay in the news for the right reason; so they went on to produce videos, films which were sent to channels and customers and other stakeholders.

The disruption had placed the Delhi Metro in a peculiar situation, Anuj explained, which meant all activities had come to a standstill and operations completely stopped. Delhi Metro which navigates an entire workload everyday literally stopped in its tracks! But most importantly, they kept the system live “for ours is a different ballgame” he said.

But it was interesting times at NTPC, for there was no lockdown at all. They continued to generate power and employees were working 24×7. “Hats off to all our power engineers,” said Prashanth, cheering them as they kept the power grid alive and kicking when the PM had given the “Lights off” call on April 5, urging people to switch off the lights at their homes and light up lamps or candles or mobile phone torches. At Bharat Petroleum too, it was a paradigm shift as they had to step up to meet the huge demand for LPGs. With 6000+ distributors countrywide, they had to mobilise the staff and deliver cylinders at very doorstep, and at the same time ensure their safety. “We were in a mayhem situation, but proper planning helped us sail through” disclosed Abbas.

Communication needs of PSUs are different. With the government being the main shareholder for PSUs, their communication to stakeholders takes another route. Because of its social and national obligations (which is the prime objective of the PSUs), communication has followed a different style. However, things are changing now. With the Government’s disinvestment policy, PSUs had started adopting new corporate strategies in terms of communication and brand recall.

Communication plays a key role in PSUs, to ensure a proper flow of information, which is crucial for PSUs especially during a crisis. But COVID-19 has already started re-writing the rules. Crisis management is another important area to consider when talking about PSUs. The most crucial part of crisis management is reacting with the right response quickly – i.e. communication.

Talking about the importance of communication for PSUs, Sumita said that corporate communications in PSUs is different and what they noticed at SAIL was that – “we are all very adaptable and we stand strong – which was a revelation for us!” Their internal communication changed to e-communication and they were soon having e-meetings, interaction with ministers, video-conferencing and so on. Their marketing platform has changed but with a great focus on safety. Insecurities are always there in PSUs and jobs have their own challenges, but there are checks and balances. And, we are all re-skilling ourselves, DIY style, both for internal and external communication, she remarked.

Can a brand be developed without any ads? Yes, said Anuj, and went on to add that for Delhi Metro he had to highlight that communication has and will continue to played a crucial role. With PSUs too, brand recall has huge significance. Even though, they have come to a halt, their stories are coming out, but it has a different flavor, for this was not a time for promoting brands, he insisted.

Internal communication is that communication that works, according to Abbas and culture played a big role at BPCL. They created a lifeline with distributors and dealers to reach out and give them a feeling that the company is with them, in these trying times. They kept the employees engaged and motivated even though they have been stretched out. Their radio channel and films on corona warriors really kept the motivation alive. He also disclosed that in the fuel stations they reached out to the migrants, “with a sense of humbleness rather than trumpeting their deeds”.

Personalities featured in media brings to mind the mastermind behind the Delhi Metro, who was credited with changing the face of public transport in the country. Referring to the Delhi Metro’s Principal Advisor and former Managing Director, the legendary Dr. E Sreedharan, who was popularly called “The Metro Man”,  Anuj  informed that Delhi Metro’s communication package included the MD at that time, but the company’s projection was also simultaneously highlighted.

At NTPC, projects are highlighted, according to what the company is doing. Prashanth touched on the evolving growth pattern of NTPC and elaborated that besides fossil fuels the company has diversified into producing energy through cleaner and greener sources such as hydro and solar energy. A long term plan was formulated by the company –  to become a 130 GW company by 2032 with 30 per cent non-fossil fuel or renewable energy capacity. Considering the fact that NTPC occupies prime position in the Indian energy sector in terms of size and efficiency, he pointed out – “We feel confident that NTPC will play a key role in the nation’s renewable power growth”. So, the performance of the company needs to be put in the spotlight, as investors are interested in the performance metrics. Of course, the personality of the CMD may be different.

The question of PR automatically ropes in media relations. Will this change post-COVID? Sumita zeroed in on the fact that PSUs and journalists enjoy a healthy relationship. “We are already experiencing a trend in reaching out to media, as we have to reinforce our reputation. We made a communication strategy to push positive stories,” she said. With their MD who is internet-savvy, they went on to a massive plan – to use online interviews in all business channels, publish forty press releases, video clips and so on.

Print enjoyed the slot of being the most prominent medium and Anuj recalled that they concentrated on it and news was gripping on print, much more than TV. But COVID has changed that, he observed and added that “digital is the future”. Even before COVID, print was on its way out, noted Abbas as the new generation consumes more digital and phone; social and digital will be the future of communication and COVID-19 has hastened that. But, it is too early to write an obituary for print. Attention spans have shrunk, so print medium must transform. In the digital era, where social media features fake news, which can blacken an organisation’s reputation to a large extent. But Abbas was quick to point out that they monitor social media very closely to take care of any such incidents.

As far as the future goes, Prashanth predicted he saw two trends in the future. One, was that online communication will gain importance and secondly, off-the-record conversations will take a hit, as with online platforms everything is recorded! In fact, he felt that journalists will have to work extra with CorpComm teams for stories.

Some takeaways in these COVID times

Citing a recent leak of an internal mail, which was managed, Sumita brought home the fact that – managing tough situations is tricky; but there is a bit of SAIL in everybody’s lives! Against the Delhi Metro background, Anuj said it’s all about assuring the public that we are on stand-by and will do all we can to ensure a safe ride. It’s the shift to the social cause and activities that Abbas could notice. Ensuring that positive stories got published and relationship with media got an impetus, shared Prashanth; good storytelling is a requirement for getting stories published.

Be the first to comment on "The Communicators’ Assembly Point 4: PSU Communications"