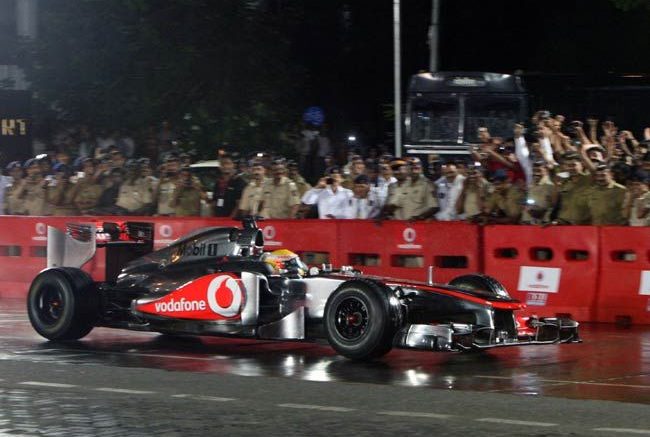 A new client had been signed. We had to put a team together in less than 72 hours.

We did this by convincing, cajoling and forcing team members from other SBU’s to come on board.

Our promise to these team members. See if you like it for 6 months, and if you don’t, you can always go back to your original SBU.

Other SBU’s also chipped in, particularly when it came to the 1st initiative we did for the new client.

This was the visit of one of the greatest F1 drivers of our generation – Lewis Hamilton.

He was a relative newcomer in 2012, but his talent was unmistakable.

Lewis was a part of the F1 team sponsored by our client.

And he was coming to India with his car to enthrall millions of Mumbaikars.

Our motley team in the newly formed SBU was not really clued in to motorsport. So we requested PD – the head of the automobile SBU to chip in. He willingly agreed.

And before you could say ‘Jack Robinson’, he had mobilised his entire SBU to help us – the new kids on the block.

Remember, we were less than 72 hours of winning the business when we were told of this event. The client was expecting not just national news and mainline TV coverage but also regional media (that was also the reason they had signed us on – for our strength in regional media).

We were also made aware of the power of digital media, when the client said that they were also expecting Lewis Hamilton to do an exclusive podcast with international media. Both were relatively alien to the Indian market at that point in time, but we pulled out all the stops.

Nothing was left to chance.

We literally bullied our way into getting a hotel booked. The necessary infrastructure had to be put into place.

Media invites had to be issued, and confirmations obtained.

There was another event where Lewis would be driving his F1 car in BKC. Police and municipal permissions had to be obtained.

Ideally, we would have loved to have Lewis driving his car down Marine Drive, but unfortunately the residents of Marine Drive objected to this. That was that. So, BKC it was.

For this event, we invited the who’s who of the Maharashtra Govt including the CM and other leading lights. The protocol to be followed for this was something else.

Needless to add, we had almost 150 people from the agency working on different aspects of the event.

RC – our Chairman, pulled out all the stops himself. He actually spoke to media owners of various regional media outlets, and convinced them of the need to do a powerful curtain raiser of the event.

Our entire network of offices were also pulled into this. They were all briefed and told what was required.

The little carrot that we dangled was that the car Lewis was driving would be showcased in some of the towns.

We also got permission to do e-mail interviews with Lewis, which his agent reluctantly agreed to.

While what you are reading may sound like everything went off like clockwork, the truth was that there was a huge amount of chaos behind the scenes. I mean, who organises an event covering the entire country in 48 hours. Well, that was our agency’s forte, and if anyone could have pulled it off, it was us.

We were fortunate in that the client had deputed one of their most reliable corp comm professionals – SR, to work with us. And he was simply magnificent. He knew what he was doing; he always kept his cool; and he was always providing solutions whenever we came up against a logistical challenge.

We, at the consultancy never knew when day turned to night and back to day again. The adrenalin was pumping, and there was no time to look at our watches or even dream of grabbing a bit of shut eye.

The morning of the event, Mumbai was ready. There were banners all over the city. Many regional media had already carried large format stories in their publications. The hotel was besieged with photographers and reporters. Lewis had to be sneaked away from one engagement to another. There were a few glitches in the podcast but it finally went off very well.

A crowd of unmanageable proportions was building up in BKC in the meantime. The stands were already full to bursting, and people were still streaming in. The police was having a tough time controlling the crowds, but were doing their best. Traffic jams, of the kind we only know about now, were building up for miles.

The crowd could suddenly hear the high pitched whine of an F1 engine – the most feral sound of all.

Lewis got into the car. Revved it, and then gradually moved of his area. He then proceeded to do a few laps of the makeshift track, which was a series of straights and U-turns. That drove the crowd absolutely wild.

And then came the moment where he did the ‘donut’ – this is when the driver turns the car round and round at full throttle – one foot on the accelerator and one on the brake, so that the car goes around in circles and the tyres start emitting smoke (the harmless kind).

One final lap after the ‘donut’ and he was gone.

Leaving a million memories behind.

The next day, we achieved a level of media coverage rarely seen by any brand. Every news channel, every newspaper, every magazine – all media in short, gave the story pride of place.

I truly believe that this one event changed the fortunes of F1 viewership in the country.

As for Lewis Hamilton, he has already broken all possible records set by the legendary Michael Schumacher, and has been knighted by the Queen.

I can proudly say that I shook his hand.

The client was so delighted with the way we had conducted this event that we even got a special bonus from them. Those were the days of being large hearted (2012).

But for me, till then always a client, this was a superb example of the fantastic agency I was now a part of. The team work they showed; their dedication, and the never say die attitude was a huge revelation.

Even after all these years, my eyes turn moist when I think of how we pulled it off.

1 Comment on "The need for speed: and not just in F1 racing"

Curating valuable conversations is our superpower!

Building artisanal brands; One story at a time