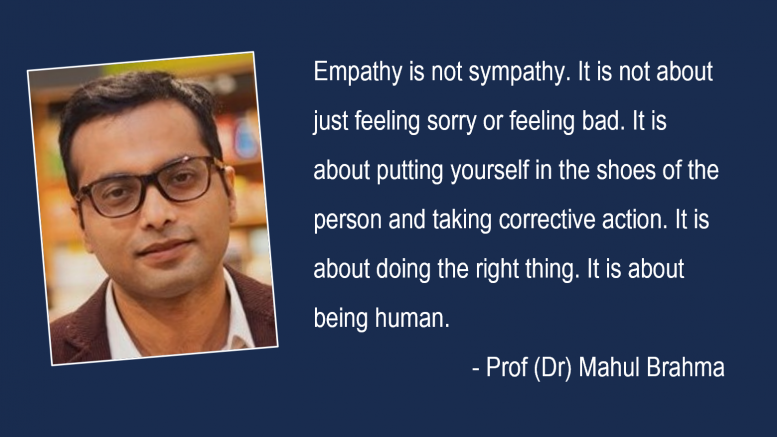 Case 1: Air Asia, Circa December 2014. The beauty of empathy is that its voice and touch and be heard, felt and recognised instantly…especially in the middle of a crisis. There words speak volumes of the empathy of Tony Fernanades, Group CEO of AirAsia after the fatal disappearance of flight QZ8501. This is an oft-cited example of how even in the middle of crisis empathetic communication is able to win hearts. This was in December 2014.

Case 2: United Airlines vs Dave Carroll, Circa 2009. Let’s take another example from the other end of the spectrum when breaking of a Taylor guitar by United Airlines gave birth to a song that went viral in 2009: “I should have flown with someone else, or gone by car,” cause United breaks guitars.

The YouTube video was posted on July 6, 2009. It amassed 150,000 views within one day, prompting United Airlines to contact Carroll saying it hoped to right the wrong. The video garnered over half a million hits by July 9, 5 million by mid-August 2009, 10 million by February 2011, and 15 million by August 2015. And besides ruining the reputation of United Airlines as most-unfriendly and careless airline and becoming famous, Dave got guitars, with best compliments from the Taylors. (Ref: Book: How to Communicate Strategically in Corporate World)

Case 2 was one of the possibly worst-handled cases in crisis communication that started with denial of the company and then consistent misbehaviour. So by the time they went back to compensate, it was too late.

Empathy is not sympathy. It is not about just feeling sorry or feeling bad. It is about putting yourself in the shoes of the person and taking corrective action. It is about doing the right thing. It is about being human.

So even in a crisis you do not forget to be human and that shows the character of the brand.

Let us take a look into the genesis of the issue. Crisis is an inevitable part of running any organisation. But historically, it has always been the elephant in the room, he who should not be named like Voldemort. So when a crisis comes up, it has to be “hushed” first and then very silently handled. Communication thus has been very cold and detached, in the fear of exposing the vulnerability of an organisation or a leader.

We, the new-age communication leaders, have to change this mindset. Crisis needs attention and surely needs empathy. The biggest mistake historically in handling crisis has been the failure to show empathy in handling the situation, to demonstrate a coldness towards the pains of the “other side”.

Case 3: Malaysian Airlines, Circa March, 2014. While its case is very similar to Air Asia but its handling of the crisis is quite similar to United Airlines. It’s flight MH370 disappeared. In the first 4-5 hours when Tony in his case was reaching out to the family through empathetic tweets, Malaysian Airlines chose radio silence. They did not respond to calls or even reached out with any information to the family members. The tone was very rough so that people are discouraged to call back. They also did not admit that the situation was not in their control. Radio silence and then lack of truth and empathy – they had all the ingredients of a disaster. After over a day they chose media release as a choice of communication and then social media wherein the communication was cold and confusing. This created a huge space of speculation and negative branding. The worst of all was the SMS that they had sent to the family on the “disappearance” of the passengers. You just can’t get more cold than that.

To conclude, I would like to re-emphasise the need to have empathy while communicating crisis. It is very important actually to show empathy at a little earlier stage. As I have always said the best way to manage crisis is to keep an ear on the chatter on social media…what is being talked about, especially what is being criticised, even mildly. One rude customer care executive can start a ripple effect that can bring down the reputation of an organisation. So that one complaint in the form of a tweet needs to be addressed with empathy and not with cold denial.

This helps counter most crisis even before it snowballs into one.

New-age communication leaders need to add “empathy” in their crisis communication manual, especially when MD or CEO has a critical role in handling the crisis.