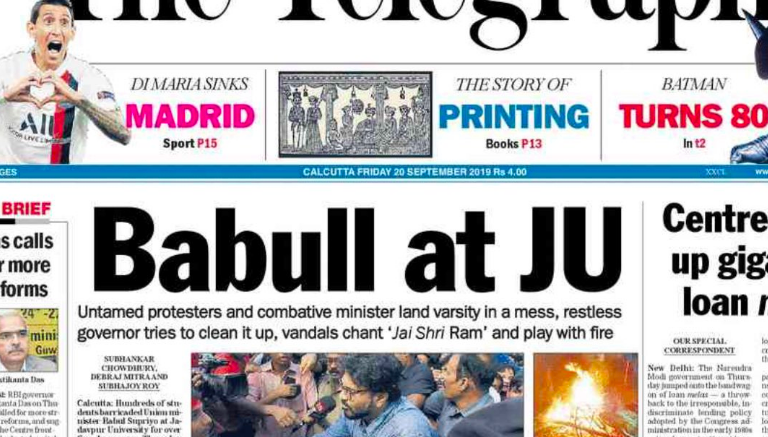 You don’t have to necessarily have pretty ladies or the bounty of nature as a muse. For a commentator on journalism, an unconventional editor can be a wonderful one, as I muse this week on R. Rajagopal, editor of Kolkata-based The Telegraph newspaper, which has been in the news for provocative, screaming headlines and coverage that old-fashioned hacks would describe as biased.

Rajagopal was in the news recently after his paper published a report on a telephone conversation between him and singer-turned-BJP leader and Union minister Babul Supriyo following a confrontation at Jadavpur University.  The report that quoted the editor was something akin to one I had read decades ago when Arun Shourie, then executive editor of Indian Express, had “outed” Haryana leader Devi Lal for using a bullying style and swear words in a call meant to influence him.

“I am not a gentleman. I am a journalist,” is the quotable quote from Rajagopal, who in a recent interview to a Kerala website,  said in an equally controversial way:  “Earlier it (neutrality) was a cherished value. But not anymore. We cannot afford to stay neutral in the current atmosphere. I personally believe neutrality is not something we should be aspiring for right now.” (Do read the whole interview. It is pretty interesting)

Among Rajagopal’s outrageous headlines is one that described BJP minister Smriti Irani as ‘Aunty National’.

In a sense, The Telegraph is turning out to be Left/Liberal answer to channels like Republic TV  and Times Now or websites like OpIndia. The no-holds-barred, tabloid-style discourse seems to be par for the course in an era where people no longer want sobriety but prefer new brands that confirm their views than challenge them.

I would not be as in-your-face as Rajagopal is, but at a philosophical level, his point needs to be considered. In a recent column on what I call “narrative fixing” I had written..”I do not think it is the journalist’s job to report facts as they are. In an ideal world, the journalist should try to look beyond narrative fixing and then present facts in a manner that is in the higher public interest.”

Rajagopal seems to be a practitioner of this suggestion.  Where does that leave middle-of-the-road journalism? I am not sure. In a cynical sense, I do say that those in the middle-of-the-road get run over when the Left and the Right act like pavements. But on patient thinking, I think the demand for the unbiased middle will grow when the Right and the Left create a mess. Or when the Left begins to imitate the Right.

In the real world, as distinct from Twitter exchanges and prime-time TV debates, at some point, the concerns of common people take over from the points being scored by spokespersons and sundry trolls. All the words uttered in the slanging matches at that point will be weighed in the light of the concerns of ordinary people. The ones who address the real concerns of common citizens will then appear truer.

As for The Telegraph, it has successfully reinvented itself amid financial troubles by becoming a hardline Liberal sheet in difficult times. Bias can be a good strategy.

Whatever a publication is, it should be interesting. I know some people who watch Republic TV for entertainment. Just like they watch  World Wrestling Entertainment.  Here’s what the Wikipedia page on WWE says: “As in other professional wrestling promotions, WWE shows are not legitimate contests, but purely entertainment-based, featuring storyline-driven, scripted, and choreographed matches, though matches often include moves that can put performers at risk of injury, even death, if not performed correctly.”

Is that journalism or “newsatainment”?

My answer is: “It depends.”

Be the first to comment on "The Telegraph oscillates between courage and outrage, but it certainly is ‘newsatainment’"

What they know: Part 3 – Amazon

It’s all about Reputation