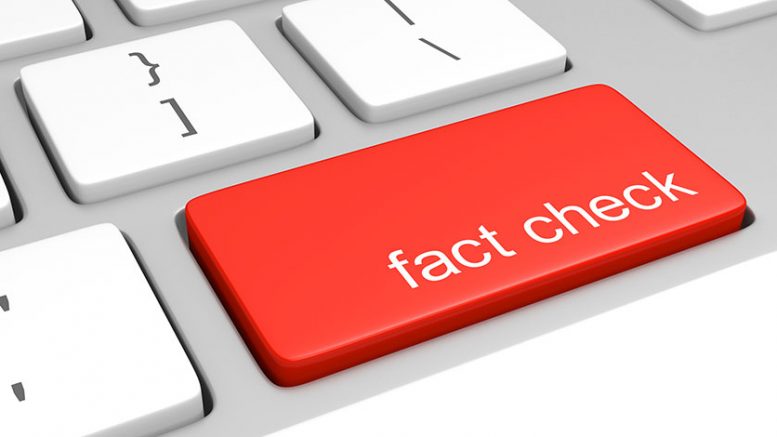 If judges can be judged on whether they have been just or not in a verdict, if social media or independent digital websites can question whether a mainstream news media entity has done a professional job or not, it logically follows that we should be checking the fact-checkers. I said checking, and not necessarily “fact” checking because, the simple fact is that the news business is not just about facts in a basic, 100% verifiable sense. Opinions, projections, estimates, and even predictions are part of the news business.

Sometimes, fact-checking sites are way too overzealous, as I found last week after the Coronavirus COVID-19 spread more havoc across the planet. While social media was abuzz with how the deadly virus was predicted in two books, fact-checking site Snopes.com ran a piece titled, “Did Self-Described Psychic Sylvia Browne ‘Predict’ the Coronavirus?” and then it said in a strapline below: ‘Lobbing vague claims about likely events does not a prediction make.’

However, when I read the reproduced page of Browne’s 2008 book, ‘The End of Days’, I found it quite mind-blowing.

Here’s what Snopes said: ‘It’s unclear whether Browne’s “prediction” was more of a lucky guess, considering the book was written after the SARS outbreak. Furthermore, it’s unknown —possibly unlikely — whether other aspects of Browne’s book passage will bear out.’

I found this fact-checking vaguer than the vagueness it accused Browne’s book of. Here’s what the relevant paragraph of her book said:

‘In around 2020 a severe pneumonia-like illness will spread throughout the globe, attacking the lungs and the bronchial tubes and resisting all known treatments. Almost more baffling than the illness itself will be the fact that it will suddenly vanish as quickly as it arrived, attack again ten years later, and then disappear completely.’ (By the way, an Indian astrologer, Ashish Mehta, says, echoing Browne, that the virus will wane quickly).

I thought the specific mention of the year 2020 by Browne and the descriptions of symptoms and its reach were such that it defied probability. A journalist has to look not just at “facts” but also the plausibility and probability of a claim. A prediction story of this kind is in the “soft’ category of stories, and the attribution to a psychic, self-declared or otherwise, is a note of caution for the readers anyway. There is no need for a fact-checking site to go overboard on this. But I am glad Snopes described this bit about Browne as a “mixture” and not false.

I also found it fascinating that a speculative novel by Dean Koontz published in 1981, called ‘The Eyes of Darkness’ refers to a virus called Wuhan-400, a biological weapon.

I find Snopes quite annoying on that one. For me, the news story lies in the fact that a novel (and therefore entirely fictional by definition) long ago actually named a virus after Wuhan. The story lies in the eerie coincidence (it was not a prediction anyway). Too much fact-checking can sometimes confuse readers. Journalists need to put the story in a context. Often, that comes from skilled writing.

By mentioning the strange coincidence in the Koontz book (and adding to good effect that it was a best-selling work of fiction), the reporter would have done a good enough job. Similarly, the improbability of Browne’s prediction makes it a plausible work of reportage on the mystical aspects of the universe.

It is not necessary for a journalist to be a scientist or to take into account only the technically scientific facts. Blending language, sourcing and context, the journalist has to bring the story alive if it falls into the category of the unusual that needs to be told. Here’s where even fact-checkers need to be taken with a pinch of salt. It is all in the details — not just of a claim, but also in the definition of journalism.

Be the first to comment on "When news is mystical: Fact-checking is good for journalism, but it has its limits"