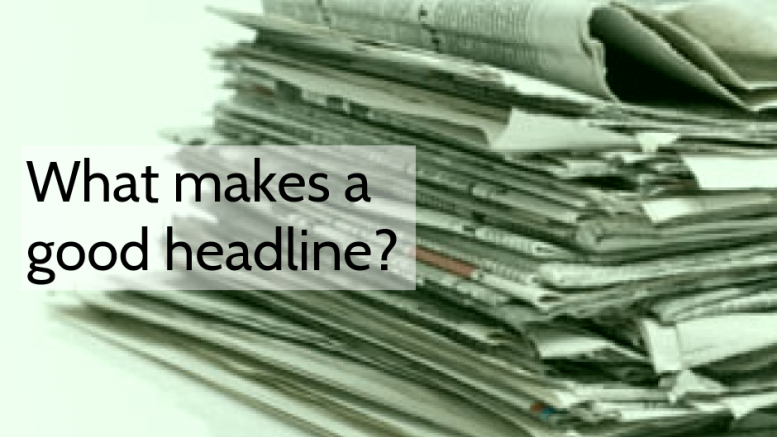 In the good old days as a news reporter, I used to say that I take 30 minutes to write the first para (intro) of a long story and 20 minutes to finish the rest of it. That went with the philosophy that we were nurtured on: that the reader must get a good sense of the story from the headline, caption or intro.

Having spent quite a bit of time at Reuters, there was also the additional burden of telling international news editors — and by extension, global readers — the significance of whatever I was writing. Apparently, in rival Associated Press of America, editors asked for the “so what?” graf (paragraph) that implied that the story should begin with or have a pitch that answers the question “so what?” from the editors. It should interest them enough.

The headline, they used to say, is the show window of a story. We grew up in the days of the print media, when a magazine cover or a newspaper headline was meant to make someone part with money at a newsstand to buy the issue in question.

Now, what has changed in the age of the Internet and social media? A lot has, and some things have not. But it is clear that the same rules do not apply anymore. When a medium changes, the message ought to. Some principles are important, and keeping them in mind helps.
Last weekend, I quite enjoyed tweeting a BBC news article that showed how it was the British imperialists who actually built India’s first national cricket team. What fascinated me in this was a lower-down para that mentioned how this was the opposite of the impression formed by the fictional Bollywood film, Lagaan, in which Aamir Khan builds a rural cricket team to fight a British tax. I cut out the operative sentence and made it the covering note of the link I shared on Twitter.

The good response to that tweet convinced me that the “Lagaan” angle made Indians sit up — and probably attracted more eyeballs among Indians than the plain BBC headline did. The thing is that social media and the Internet give us the luxury of changing the headline to suit different audiences and the times of the day. Grabbing the attention with a dynamic use of headlines or rearrangement of stories does make sense.

I do remember working to produce the “dak” editions of The Times of India that used to go to hinterland towns. This was just the city or metro edition put to bed (sent to press) early for the benefit of long-distance travel to smaller towns where people would read today’s news under tomorrow’s masthead. We tried in our own small way to make the editions as relevant as possible by packing in some latest news and some that was relevant to the interior towns/areas.

The thing is that with Internet and Google News, the entire planet is now yours to see and reach out to.

I believe that rewriting of news, showcasing of articles and writing of headlines and captions can make a dramatic improvement in the reach of a news brand — but most news organisations do not do enough on that front.

However, grabbing the attention of consumers for the sake of it is not on. What we often see these days are simplistic click baits. News writers often hide the real news in the hope that people would click on the headline to visit their site. Am not sure if that is the best thing to do. It may work for audiences with not much else to do other than gorging on gossipy items with voyeuristic delight. I still think mature audiences want news articles to come to the point as soon as possible. The trick is to make them read more of your stuff in a shorter time span than waste their time.

News items always competed for attention. But I now think the focus should be not on “attention span” but “retention span.” It is the age of the attention economy and grabbing attention may be important, but saving attention is vital in a world where content assaults the senses of readers and viewers on screens of different shapes and sizes.

Audiences should thank journalists for saving their time, not wasting it. This approach requires an overhaul of journalistic practices. However, since a large amount of digital news brands rely on click baits linked to ad sales pitches, consumer time is often wasted than saved. The tricky part is how to get readers to pay you for the time saved. Maybe that’s a problem that needs to be solved for journalism to rise above the click-bait culture.

In Anticipation of an ‘Off the Grid’ Generation