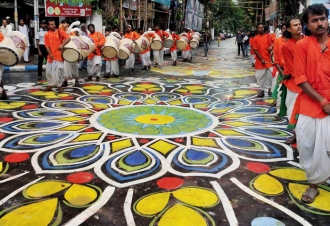 Festival-times are majorly engaging times. My city of Kolkata that goes bonkers every year during Durga Pujo, had a surprise in store this time. A one km long ‘alpana’ or ‘rangoli’ stretched across Lake Road, anticipating the homecoming of Goddess Durga. Pictures of the ‘alpana’ have made its way into the social media and didn’t people go gaga over it!

With that massive welcome ‘red’ carpet, Kolkata also hailed the start of Navratri. No one can outdo Kolkata as far as its Durga Puja flavour and enthusiasm is concerned. And, the ethereal streak that sparks up the City of Joy actually makes the festival the cultural extravaganza that no one can resist.

When I visited the pandals at Chittarajan Park, and one of the first things I encountered was – a carpet welcome ‘alpona’ carefully by my artist friend Kajal Karmakar. I was transported back to my city – Kolkata. The time-travel mode that I fell into, did not stop me from noticing the brands that were vying for attention. There was brand Shalimar well positioned, so that we noticed the range of products – coconut oil, ghee etc.

It was not just Shalimar, but other brands were centre-stage – like Maruti Nexus was on full display. The model Ciaz was right there, for people to get a ‘touch and feel’. So, Delhi’s mini Bengal also had the community totally engaged with Advertisement:Replay Ad. The grand pandals, the most breath-taking idols and grand food….there was so much more to just being there during this celebration!

Besides, the physicality of a pandal-presence, a number other brands have also incorporated the magic of the typical Bengali Durga Puja sentiments into their ad campaigns as well. One noticed that they are indeed, high on fun, nostalgia and picture perfect – as they captured the essence and beauty of the festival.

Bengali food comes into the spotlight at this time. The video released by Oh! Calcutta the speciality restaurant, perfectly captured how one feels if you cannot be in Kolkata during Pujo. And, the brand was driving engagement on social media too. On Instagram, they invited consumers to visit their outlet, click a photo with their friends and family and upload it using the hashtag #AddaAtOhCalcutta; and there was the added attraction – the chance to win vouchers!

Keeping the quintessential Bengali in mind, a hilarious video titled ‘Things Bengalis do during Durga Pujo’, was released by ScoopWhoop tying up with Lifestyle. Here, they have captured the excitement of Pujo. Tanishq narrated a beautiful story about a woman who is organising Durga Pujo for the very first time, who is anxious whether everything will turn out to be fine. But her face breaks into a smile when her father gifts her a pair of gold bangles and reassures her, saying that she has done a fabulous job.

Celebrating the unsung heroes – the clay artisans of Kumartuli without whom Durga Puja would be impossible to celebrate, was brand CenturyPly.  The CenturyPly Heroes campaign asked people to share pictures of the idols being made or of the finished idols on display during the Pujas, along with the name of the artisans making them. And, there were awards for three artisans getting most number of entries and top five photographers too. I remember the CenturyPly Heroes campaign, started in 2014, which was aimed to recognize the carpenter’s artistic skill, indomitable spirit, and commitment towards art. In a progressive move in 2016, CenturyPly extended the campaign to engage people beyond the carpenter community –  the ‘everyday heroes’, like the dhakis, policemen, electricians, ambulance drivers, nurses, doctors on duty, sweepers and anyone who bears the stamp of the ‘Sab Sahe Mast Rahe’ spirit and attitude of CenturyPly.

Youthful energy was right on top, not to be ignored. Targeting the millennials of the city was Spykar’s Durga Puja brand campaign –  #FASTMEETSFESTIVE. This film tracked four youngsters spread across various corners of Kolkata, as they played their music, painted on their canvases to capture poignant life-moments. Splashed with colour, the film touches the festive fever, restlessness and action – to the very core.

Now that the festival season has descended on us, we can look out for what the Diwali celebrations has in store…

Be the first to comment on "Captivating times – ringing in a colour fest!"

Should brands depend on traditional media?