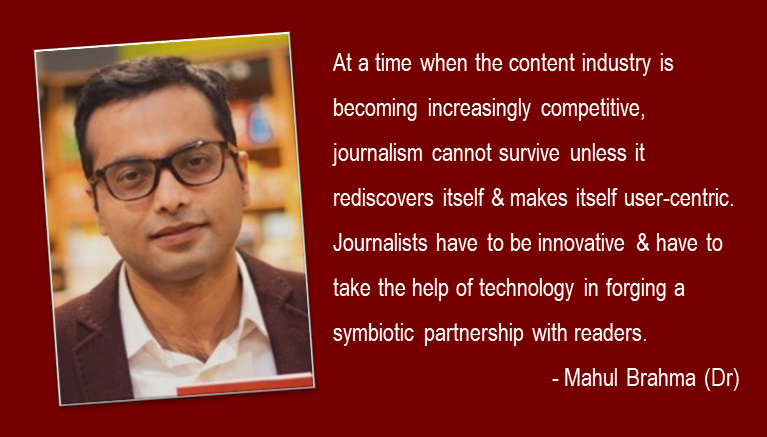 Dynamism is an intrinsic nature in the fields of communication and journalism. There is also a deep connect between these verticals wherein development in one has a direct impact on the other. So when the world of media and journalism is witnessing the evolution of a new form in both theory and practice, corporate storytellers and communicators can’t be left behind.

The idea of looking at a story as a collection of parts (both useful and useless) and not as a singular homogenous entity is known as modular journalism. To put it in very simple words, a module in a story could be considered to be a sentence or a quote or any other piece of text that answers very definite questions like “How is the story relevant?”, “How is it impacting me or my fellow citizens?” and so on and so forth.

While conducting a study, content expert Pierpaolo Bozzano and his team worked closely with linguists to identify what these specific useful modules are. This was done with the intent to make technology identify the modules. Bozzano, who has the distinction of understanding both news content and technology, conducted some experiments to find out as to what readers want.

It is needless to mention here that life becomes easy for a writer if she/ he identifies the modules. Then she/ he can just use specific modules required for a story and the job is well done. At the heart of this realisation, there is the primordial concept of catering to user requirements. Unfortunately, ensconced within our comfortable echo chambers, most of us fail to understand that we are as good as the value that is attached to us by our readers. For example, forcing a reader to read a 3,000-word-long detailed budget story, however, she/he wants pointed and brief information on how the budget stands to affect her/ his life. This exercise beats the very purpose of why a story is written in the first place. AI is now playing a significant role in determining what a reader wants. Based on the findings, journalists would devise the story using specific modules.

Journalism as we know it today

Inverted pyramid style, 5Ws and 1H, emphasis on facts, comprehensibility – these are certain classical concepts that all of us were oriented to when we decided to become journalists. We were also made to believe that our readers would compulsively consume our content if we stuck to these basics. And, we were happy! Somewhere, we were also contended that we do not have to change our style and we can still continue to be relevant.

However, some of us, who saw through the reformatory changes that were brought about by the dot-com boom of the late 90s and early 2000s, knew that everything in the world of media is transient by its very definition. We knew that the uncontrolled march of technology would not only change the very nature of content, it would transform the tastes of the consumers too. What we did not know though was the nature of this change.

While the larger concept of Artificial Intelligence (AI) was not unknown, its impact was largely misunderstood. Therefore, here we are, existentially battling a dangerous drop in readers’ interests in our stories that still predominantly follow the traditional styling and structuring. It has been proven beyond doubt that most readers do not read beyond a certain length of a news story. At times, they skip some paragraphs while reading some. Not really an ideal situation for a news editor or a news writer. This is exactly where AI comes in handy.

Make no mistakes. The mere adoption of AI cannot be expected to be the panacea. If at all, the problem is more fundamental than some of us would like to assume. It is with our understanding of what readers want. Bozzano’s primary thesis was the obvious fact that most readers never read long stories that are mostly written to satisfy the ego of the writers and not to meet the needs of the readers. However, what is infinitesimally more important is the second part of his findings – the fact that an article can be divided into parts. While some of the parts are useful to the readers, some of the others are not. AI was extensively used to figure out the useful and dysfunctional units of a story. This study goes on to prove that many of the usual components that we incorporate in a story are pointless to the readers.

The Inclusive Nature of Modular Journalism

To be very specific, modular journalism hits at the traditional information hierarchy and makes journalism more democratic. The concept transfers the power to design content from the editors to the readers. Let us consider a very crude example to understand this assertion. There is a dominant belief that business news is boring and is not consumed much by women and young citizens. However, modular journalism reveals that the devil is not in the subject but in the way business stories are written.

Modular journalism makes the journalists take an active interest in the readers and ensure that there is a mutual development of trust and engagement.

However, there is a flip side to the practice. At times, it lets the readers decide the type and structure of the content they consume. This can be a dangerous proposition as unhindered and unbiased information can be the obvious scapegoat in the process.

At a time when the content industry is becoming increasingly competitive, journalism cannot survive unless it rediscovers itself and makes itself user-centric. While many changes are being constantly introduced, the issues of user engagement and user significance were hardly given any importance in the larger news ecosystem. Modular journalism makes a conscious effort at making the reader the obvious protagonist and taking her/ his needs into consideration.

However, as we can clearly see, the concept is still at its nascent stage and would require a few more years to mature. However, what is obvious is that the traditional news writing style would no longer suffice. Journalists have to be innovative and have to take the help of technology in forging a symbiotic partnership with the readers. The rest, as they say, would always be etched in history.

Communication, therefore will have to be tailored in a way that there is a clear alignment between the content that journalists or editors are demanding and the ones that are generated by corporates. Such modifications become critical wherein corporate storytellers need to exactly know who the media wants to be the real protagonist.