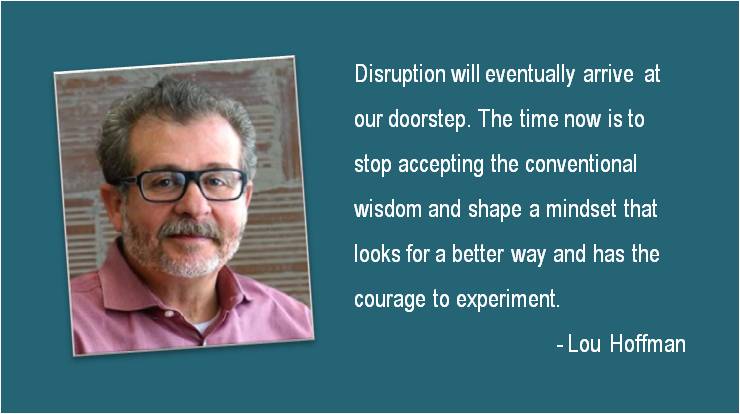 The “D” word has yet to wreak havoc on public relations.

When I discuss this with colleagues, a number will disagree. “What do you mean we haven’t been disrupted? Just look at how the internet and social media have changed the game. What about all the companies that have become publishers taking their stories directly to their target audiences?”

I agree that our profession has undergone big-time changes, but disrupted? I don’t think so.

Step back and consider what this word means. Disruption bulldozes the status quo. The people working in the profession under siege lose their jobs. The endangered species, called the travel agent, serves as a good exhibit A — a classic example of the internet cutting out the middleman. More recently, we see how ride-sharing services such as Ola, Uber and GO-JEK are changing the very fabric of transportation while taxi drivers strike, trying to retain some semblance of their institution.

Closer to home, publishers continue to scramble for business models that generate revenue in a world where so much information, including news, arrives free with a click. Roughly 20 years ago in the U.S., there were 95,000 PR jobs and 55,000 newsroom journalism jobs. Fast forwarding to today, there are well over 200,000 PR jobs and around 45,000 newsroom journalism jobs. When journalists talk about being outnumbered, they mean it … literally.

With this said, today’s healthy PR business can cause a false sense of security. Those tough times are happening to journalists, taxi drivers and travel agents, but not to us (said someone smugly over a low-fat cappuccino at the local café). This mentality can lead us into the trap of doing things the same way because that’s the way it’s always been done.

For example, why do we insist on pummeling executives into submission to stay on message? In a world where information is plentiful and people have so many choices on what to access, staying on message actually hurts the cause. Messages are dull. In all my time in the communications business, I have never once heard someone say, “Wow, that’s a great message.”

Furthermore, journalists disdain executives who spew messages. It impedes the “discovery process,” which in turn pushes the story into the commodity category. Simply talking like a human being — right, conversational language — and exploring questions with a point of view aligns with how today’s journalists construct their stories.

An experience supporting Philips and its CD-ROM business years ago forever changed my perspective. In preparation for a slew of media interviews scheduled for Philips, I walked the VP of marketing through the messages and how he should answer anticipated questions. That was what I was trained to do.

The first interview unfolded according to plan. The second interview found the reporter getting more and more agitated as the VP parroted back the party line. The reporter repeatedly pressed for market projections, which frustrated the VP to the point that he finally blurted out, “Trying to figure out the number of units that will ship in the future is like asking Mrs. Magellan how many lunches to pack. Who the hell knows?” Talk about an ice breaker. The response completely altered the dynamic of the interview.

I witnessed through my own eyes and ears that conversational language and stories trump corporate drivel. Yet, here we are in 2018, and our profession still adheres to the practice of messaging with the fervor of an infant clinging to a tattered blanket.

That’s just one accepted practice that bears questioning. There are others. What about the dependence on the news release? I calculated that the PR business in the U.S. shelled out $4.5 billion on 762,000 news releases in 2015. Not even three percent of those news releases generated meaningful media coverage. Does this make sense?

Or what about our quest to control social media? All the rules and restrictions squeeze the humanity out of a media that has the potential put a “face” on a company.

I could go on and on.

Disruption will eventually arrive at our doorstep. It might be next year. It might be in 2023. But the time is now to stop accepting the conventional wisdom. Shape a mindset that looks for the better way and has the courage to experiment.

Then again, we should have been doing this all along.

Does competition matter if the communication is right while building a brand?

Building authenticity in the era of information