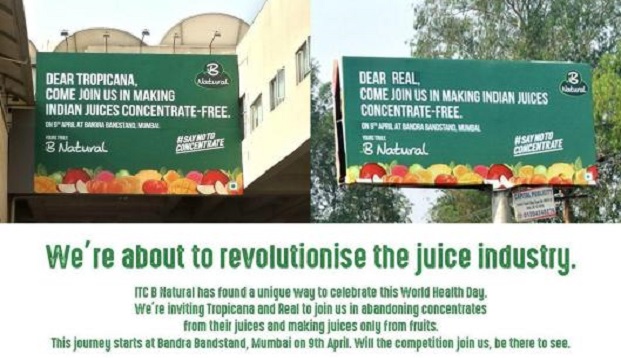 An interesting case has arisen in the world of marketing following a high court ruling that has at least temporarily restrained ITC from advertising its new fruit drink branded BNatural in a comparative in-your-face format mentioning rivals like the PepsiCo-owned Tropicana and Dabur-owned Real. The point is that although ITC is in the dock for its questionable, controversial hoardings, it is equally true that the Kolkata-based late entrant in the fruit business has been able to immediately project itself in the big league of brands. Understandably, critics are calling it a gimmick.

The court has just begun to hear the case that follows PepsiCo protesting against huge billboards that named Tropicana, while Dabur’s Real has launched front-page jacket advertisements in leading newspapers taking on ITC’s campaign that claims its product is uber-natural compared with its established rivals. Somewhere, ITC’s gimmick seems to be working.

This reminds me of a humorous conversation with a respectable editor in my younger days when he compared something I said with a prominent but controversial politician. When I protested, he said: “Look, I have now put you in a bigger league because he is the leader of the opposition. So you should not be complaining”.

Sometimes,  league dynamics play a critical role in the world of branding, and public relations professionals who spend valuable time and energy in getting media coverage for their clients are benefited by controversies that generate news. The biggest beneficiaries in this game are Bollywood producers, who, it is widely believed, engineer controversies related to upcoming movies. This apparently helps them save tens of millions of rupees in ad spending.

There is a Hindi saying, “Badnaam huey toh kya, naam toh hua” (So what if they got a bad name, it is a name nevertheless). It is a tricky business, but sometimes, as we see in the ITC case, a controversy that results in a rap on the knuckle can be worth the pain as long as it is on the right side of the law and ethics.

In the ITC case, BNatural has got media coverage on the high court ruling that PR professionals may describe as “earned media.”

I have solid reasons to wonder if the ITC gambit, which relies on the hashtag #saynotoconcentrate targeting Tropicana and Real has been inspired by a Thums Up vs Pepsi controversy in 1990, when PepsiCo entered India as part of  the industry liberalisation programme.

As the story goes, the government, citing health safety grounds, suddenly banned the use of brominated vegetable oil (BVO), a food additive used by Parle brands Gold Spot and Limca, while Pepsi was all set to bring in Mirinda and 7 Up to take on the established brands. Parle was forced to change its product formulae and had to change its ad strategy as well.

Coincidence too much that BVO was banned just before PepsiCo entered India? (Wink, wink)

We will never know why all of a sudden the government banned BVO, which has had its own controversial run in the global soft drink business. But we do know that Parle’s drinks were on the defensive that torrid summer.

Now, it seems, PepsiCo, the owner of Tropicana, is being targeted much the same way as Parle was in the summer of 1990. I leave the rest to the reader’s imagination. Karma and all that. But the point to note is that in the BVO saga the government was also a player.

That brings me to Arvind Kejriwal, the chief minister of Delhi, who has been in the news for a series of apologies to people including finance minister Arun Jaitley after facing defamation cases relating to his allegations of their misconduct. We have two sides to this story. Kejriwal apologists (if that is the right term!) such as Aam Aadmi Party spokesperson Atishi Marlena argue that Kejriwal preferred to say sorry because it is difficult to face court cases that are a drain on resources, and a public apology enables Kejriwal to get on with the business of serving people and fighting corruption in other ways.

A less charitable explanation would be that Kejriwal has now acquired the reputation (brand value) of a giant basher and has achieved his mission of being a rallying hub for anti-establishment voters and activists. In that sense, ITC and the Delhi chief minister have a lot in common! Talk about building a powerful brand in a short time at low costs!

Be the first to comment on "Juicy controversies: Guess what ITC’s new brand and Arvind Kejriwal have in common?"