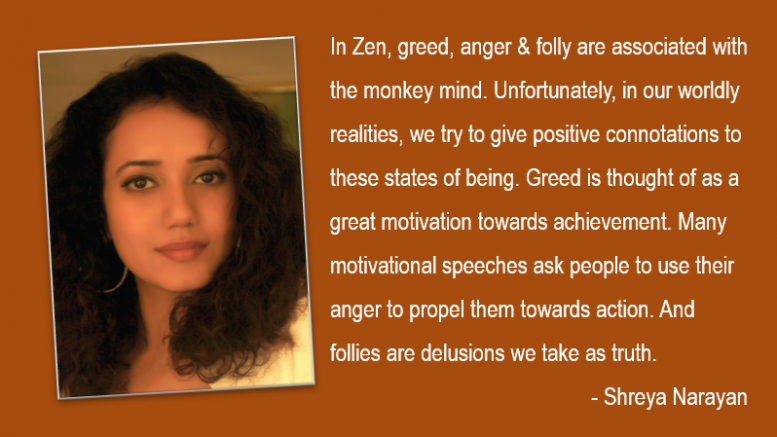 And now that you have started to sit at one place for a period of time, without any engagement, slowly and steadily, as your body gets anchored, your mind will too.

You will concede that our mind loves monkeying around.

What is a monkey mind? It is that part of ourselves which jumps about from one thought to another, chattering, fearing, craving, judging, doubting and lashing out, so much so that it does not even realise where did it start from.

In Zen, greed, anger and folly are associated with the Monkey Mind. Unfortunately, in our worldly realities, we try to give positive connotations to these states of being. Greed is thought of as a great motivation towards achievement. Many motivational speeches ask people to use their anger to propel them towards action, and use it as a tool of self-assertion. And follies are delusions we take as truth. We just have to see the state of today’s media to understand how we have been fed delusions for so long, we have lost trust even in truth.

One of the biggest example of greed is what we are doing to our bodies. The body certainly does not need all that food. Then why is our hunger never satisfied?

Are we eating because we are hungry?

I have found myself eating because it is time to eat. But was my body asking for it? No. And why did I not know even when my body was asking for food? It’s because I was not connected to my own body. Infact, most of us have no idea who we are, and what does our body want?!

The truth is, that greed comes, not from never having enough, but from never feeling enough. For not esteeming oneself. And that is why we cannot take it when someone puts us down. That’s because, in our eyes, we are not enough, and the other guy now knows our secret, and is reiterating it. The Monkey Mind immediately feels angry, and lashes out, and then feels great for having asserted itself.

But can one ever truly feel great after lashing out? That’s a delusion that comes in the category of folly. And is oft-practised by new-age careerists to feel relevant on platforms such as twitter, where people like to use criticism, either in the garb of wit or attack, to feel relevant. It makes them feel enough. But can criticism in the form we do today ever make one feel enough? You can say yes, but remember, delusions never stop.

What can save us from our Monkey Mind?

For starters, getting anchored.

As your body gets anchored, your mind will too. 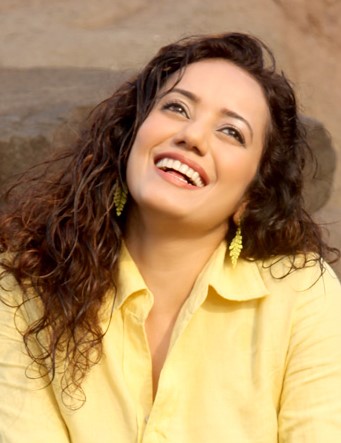 Shreya Narayan is an actor.

She has acted in films and series like Saheb, biwi aur gangster, Rabindranath Tagore stories by Anurag Basu, etc.

Be the first to comment on "Drop the Anchor"

Keep it Short, Create an Impact

Stirred and shaken, changed and not broken